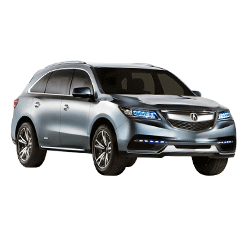 Should You Buy a 2015 Acura MDX? Here Are Some Reasons For and Against

Acura is a brand known for stylish design and excellent reliability. The Acura MDX is a crossover SUV with a history of excellent safety ratings and timeless style. The MDX has been a part of the Acura family of vehicles since the year 2000 with its V6 model debut. The following list contains a brief overview of the 2015 Acura MDX, citing 10 reasons to buy the car, and a few reasons not to.

The newest MDX model is based on the third generation from 2015 and contains a few minor updates. The technology package includes additional 2015 features such as rain-sensing wipers and heated seats in the second row of the cabin.

The MDX is equipped with several features that make driving an SUV quiet and smooth. The Integrated Dynamics System engages various throttle and handling controls for an aggressive sporty feel or a smooth driving experience. Acura's famous electronic steering system is integrated with IDS to give a custom steering experience that's far away from traditional power steering.

On-demand music and entertainment is an available option with the MDX. Finding that 5 star restaurant is a breeze with the integrated Zagat review system in the navigation screen. A premium audio system is available that can link to a smartphone device or iPod.

4) Navigation is a breeze

Finding a destination on the 2015 Acura MDX requires only a voice to navigate. The touch screen controls are also available to direct the direction path with saved settings on previous trips. The navigation system is linked to the AcuraLink real-time traffic reporter to avoid snares in your vacation plans.

Safety is high priority with Acura and Honda. A braking and stability control system is integrated to function together for difficult road situations. Vehicle stability assist and braking is standard to control rollovers and slipping in icy road conditions. An optional collision anticipation system warns drivers of potential collisions.

The performance feature of the MDX doesn’t sacrifice gas mileage. The 3.5-liter engine still maintains up to 28 MPG on the highway and 20 MPG in the city.

7) It has a stunning exterior

The sculpted frame of the MDX has a modern feel while still maintaining classic Acura sports appeal. The high intensity LED headlights are sculpted into the frame to increase aerodynamic for fuel mileage. The gorgeous chrome emblem and swooping side frame add luxury to the vehicle.

Up to 16 cubic feet of cargo space is available on the 2015 MDX. The real cargo abilities are found in the 2nd and 3rd-row seats. The seats can slide forward and fold down for increasing hauling ability. Easy access to the third row is available through a simple push of a button.

When it comes to driving a crossover, the bonus of a powerful transmission makes hauling more fun. Acura features two components to their transmission. The 6-speed Sequential SportShift is automatic and features various acceleration options for a sporty drive. A paddle shifter is available in sports mode for those who want something closer to an automatic. The all-wheel drive is included in this transmission for weather control. Over 70% of torque is directed to the rear of the vehicle to control power and spin in hazardous conditions.

The overall interior of the Acura MDX is well appointed. However, some reviews and consumers have seen an increase in faux materials on this crossover vehicle.

The navigation system can be confusing to a first time driver. Destinations are reviewed on a touch screen or through voice navigation. The dashboard knob included with the touch screen can quickly become useless with touch screen as well as an obtrusive control that engages unnecessarily.

Many consumers have rated the braking system of the 2015 Acura MDX as lackluster in terms of stiffness. Many reviewers felt that the integrated safety braking system clashes with the sporty feel of the transmission and steering system. Although the safety system is excellent, the feel of braking is less robust than competitive models and may require adjustment over time for comfort.

The Acura MDX is a direct competitor to other luxury crossover SUVs such as the BMW X5 and Buick Enclave. The BMW X5 features a less sporty interior and more engine trim options outside the traditional all-wheel drive. However, many consumers have found the X5's car-like ride less appealing to the adventurous driver. The Buick Enclave has a heavier road weight and well-appointed interior. It also has a more responsive braking system. However, the MDX is still the leader in cabin comfort out of the two. The 2015 MDX has a slightly quieter cabin due to insulation and a more robust driving experience with the paddle shifter.

While there are a few drawbacks in navigation comfort, the 2015 Acura MDX maintains the luxury and reliability of the latest MDX generation in the Acura lineup. It maintains a strong reputation among crossover vehicles and will continue to amaze consumers with its high tech features for years to come.