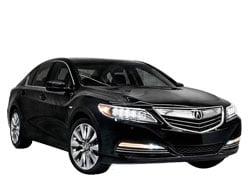 Should You Buy a 2016 Acura RLX Hybrid? Here are the Pros and Cons

Visit Car Clearance Deals, CarsDirect & MotorTrend.
Acura is known as the luxury vehicle division of Honda and holds the distinction as being the first Japanese automotive luxury brand. Since its reveal, Acura has maintained a high standing in the automotive industry, which continues to hold true with its hybrid release of the RLX sedan. The 2016 RLX Hybrid is deemed "one of the most luxurious hybrids ever driven" for its smooth and quiet ride.

The Acura RLX walks a fine line between being a comfortable daily commute vehicle and performance corner-carver. With a serene yet confident ride, the new release eliminates the common feeling of riding in a carriage over a cobblestone street. While the front-drive Acura won't be able to keep up with its competitors such as BMW or Cadillac along bends in the road, the SH-AWD Hybrid model certainly can.

While there were some complaints from previous models, Acura's 2016 RLX has significantly improved with its quality materials, dual-screen information system located in the center dash, and other less noticeable touches including a power-operated steering-wheel adjustment. This vehicle has received praise for how roomy it is in comparison to comparable luxury vehicles.

A main draw of the new 2016 Acura RLX Hybrid is that is contains many options that come standard including the 10-speaker Acura/ELS audio system, a hard-drive media storage, Bluetooth streaming, navigation, rearview camera. The infotainment system contained within the RLX is made for individuals who think technology can make everything better.

Acura equips their vehicles with the Krell Audio Package, which is well known in the world of home audio with systems costing tens of thousands of dollars. If buyers choose the Advantage Package as part of their purchase, they will receive 14 Krell audio speakers strategically placed throughout the vehicle for an optimum sound experience.

Inside of the 2016 Acura RLX Hybrid is pure comfort, with a wealth of legroom in both the front and rear. The Milano leather upholstery and quality surfaces are added touches to give riders added comfort. The seats are highly adjustable and contain both heating and cooling features if you add the Advanced Package to your purchase. The displays are large enough for easy viewing and are divided between navigation, audio, and climate functions.

The 2016 Acura RLX Hybrid is impressively efficient with its smooth transition between gas and electric power. It has proven to be highly refined where as some hybrid cars have noisy transitions from one to the next. The Environmental Protection Agency reports that the fuel economy rakes in at 28 mpg in the city and 32 mpg on the highway, which is excellent for a vehicle of its class.

A key feature that consumers have grown especially favorable to includes the Lane-Keeping Assist System, which is an optional safety feature that proves how the Acura RLX is riding the wave towards becoming an autonomous vehicle. If the RLX deviates from its intended course, painted lane markers on the roadway will be picked up by camera sensors and steer the car back into the correct lane.

Although key fobs are relatively new in the automotive industry, the 2016 Acura RLX Hybrid incorporates some added features including seat memory and climate control settings that are linked to the key fob. The car will prepare itself differently based on which key fob is being used, making this vehicle truly customizable.

The RLX can use the steering wheel controls to project a variety of displays such as the tachometer, navigation directions, adaptive cruise control, and lane-keeping information. Furthermore, it provides information related to the power distribution monitor, which shows the wheels that are driving and when they are using regeneration to slow the car. This is far more advanced than the typical digital speedometer readout.
Buying Tip:

The 2016 Acura RLX Hybrid starts around $61,000 for a base model and moves upward towards the high $60,000 range with the Advanced Package. Its starting price is comparable to entry prices of rivals such as the BMW 5 Series, Mercedes-Benz E-Class, Infiniti Q70, and Jaguar XF. This may turn off potential buyers as other major luxury automakers come in even lower for their starting prices.

Although there are many great features offered in the RLX Hybrid, the level of road noise is significant for a luxury brand vehicle. This downfall comes even after significant attention was allocated to devising noise reduction strategies and technology.

This is an area where Acura fell short in its deliverance. The 2016 Acura RLX Hybrid has some tasteful body sculpting designs yet is acknowledged as a bit plain overall. While is it the same length as its predecessor, the RL, it is two inches wider. It appears that most of the focus went into the front headlights, which contain 10 LED lighting elements to improve driver visibility.

There are a few vehicles similar to the 2016 Acura RLX Hybrid that buyers may also choose to consider. While the BMW 5 Series, Mercedes-Benz E-Class, Infiniti Q70, and Jaguar XF are all rival competitors that are comparable to the Acura ILX, regarding hybrid or diesel vehicles, the BMW 328d or the Lincoln MKZ Hybrid are viewed highly regarding their affordability and quality within the luxury automotive class.

Overall, Acura has a legendary record for its reliability, which may lessen the blow when dishing out the cash for this luxury vehicle. The 2016 Acura RLX Hybrid also features the SH-AWD version with a 32-mpg highway fuel economy. While it has been praised for its smooth ride, if you are seeking performance above all else, high-powered competitors may be a more viable option. For individuals who are looking for more fuel efficiency than the RLX Hybrid offers, they may seek out luxury sedans such as the BMW diesel or Lincoln MKZ Hybrid.
2016 Acura Buying Guides: