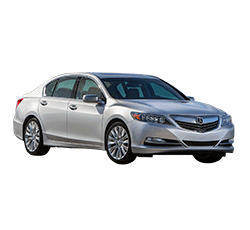 Should You Buy a 2016 Acura RLX? Here Are Some Reasons For and Against

The 2016 Acura RLX is currently one of the best luxury sedans on the market. It is a significant step above the average commuter car. Not only does the sedan offer a remarkably nimble performance on the road, but it is also easy on gas. Even in its base trim, the RLX is loaded with a surplus of features. As usual, Acura owners can expect the 2016 Acura RLX to be extremely dependable. The sedan’s refined styling gives drivers yet another reason to smile.

It is evident that Acura worked hard to enhance the appearance of the 2016 Acura RLX. The sedan does not have any over-the-top styling cues. Onlookers will immediately notice the RLX’s beautiful LED headlights. All models come standard with a set of 19-inch wheels. Prospective buyers can also choose from six exciting colors, including Graphite Luster and Pomegranate.

The Acura RLX’s 3.5-liter, V-6 engine has proven itself to be an outstanding performer. Acura has tuned the engine to pump out a thrilling 310 horsepower and 272 pound-feet of torque. With this much power on hand, the RLX can easily hit 60 mph in less than six seconds. A Sequential SportShift automatic transmission gives the sedan an extra degree of excitement.

Based on the engine’s powerful output, many drivers would assume that the RLX gets sub-par gas mileage. Fortunately, the sedan does not have a thirst for fuel. With a highway fuel economy rating of 31 mpg, the sedan can be use as a daily-driver or a long-distance cruiser. The cylinder-deactivation feature will enable drivers to save a lot of cash.

The 2016 Acura RLX comes standard with a Precision All-Wheel Steer system. This is one of the most innovative steering systems on the market. When cornering, the rear wheels can actually pivot by as much as 1.8 degrees. Whether the driver is parallel parking or changing lanes on the freeway, the exclusive steering system will definitely prove its worth.

Unlike some of its German rivals, the Acura RLX does not require any expensive maintenance. In fact, the sedan does not need any scheduled tune-ups for the first 100,000 miles. This is a blessing for the drivers who are seeking a low-maintenance luxury sedan. As long as the RLX receives the basic maintenance procedures, it should run flawlessly.

One of the RLX’s most adoring qualities is its roominess. This is the ideal vehicle for families. Even the backseat provides ample legroom for tall passengers. When traveling on a road trip, everyone will remain comfortable throughout the entire journey. The sedan’s large trunk also provides over 15 cubic feet of cargo space. Travelers will have no problem fitting their luggage into the back.

Although most owners will be pleased with their RLX, they may decide to upgrade to a newer model in the future. Fortunately, the RLX is predicted to have a very high resale value. Buyers understand Acura’s reputation for developing high-end automobiles. While some vehicles tend to decline after 100,000 miles, an Acura ages like fine wine.

Due to the Acura RLX’s abundance of standard features, the majority of buyers will be satisfied with the base trim. The beautiful sunroof allows fresh air to creep into the interior. Some of the other standard features include a powerful ELS sound system, navigation, heated seats, and a key-less ignition system. High-tech options such as the 360-degree camera system give the sedan an extra touch of extravagance.

Most drivers will instantly fall in love with the sedan’s driving dynamics. Although it is not a pure sports sedan, it does bring a high level of excitement to the table.

In order to get an all-wheel-drive system, buyers will have to opt for the hybrid model. The hybrid version costs at least $10,000 more than the standard model.

The Acura RLX will not be available with a stick-shift transmission. Some driving enthusiasts may be disappointed.

Prices for the Acura RLX start at around $51,000. This is quite a bit more expensive than some American-made luxury sedans.

Some of the direct competitors include the Lexus GS and the Audi A6. While the Lexus GS can match the Acura’s reliability, the RLX still offers more rear-seat legroom. Although the Hyundai Genesis is a less expensive alternative, it does not have Acura’s superb engineering background.

The 2016 Acura RLX is a great option for the drivers who are looking for an extremely spacious family vehicle. The sedan’s extravagant features also make it a great option for business travelers. While there are other alternatives on the market, only a couple can match Acura’s proven reliability. Due to the sedan’s great safety profile, every passenger will remain protected. Even without the use of a turbocharger, the sedan’s V-6 engine provides more than enough muscle.