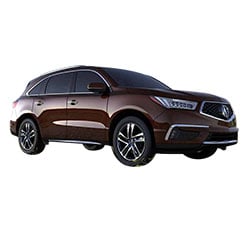 Should You Buy a 2017 Acura MDX? Here Are Some Reasons For and Against

The 2017 Acura MDX remains a strong player in the three-row crossover segment. Because of the MDX’s premium interior and engaging performance, it can compete with models that are significantly more expensive. Strong fuel economy makes the MDX a practical daily-driver. Furthermore, only a few three-row SUVs can match its bulletproof reliability.

Acura updated the crossover’s styling to give it a more modern appearance. However, the biggest announcement is the arrival of a new Sport Hybrid model.

Produced by Honda, the standard V-6 engine packs plenty of muscle. It develops an invigorating 290 horsepower and 267 pound-feet of torque. You will always experience a satisfying performance on the road. When accelerating from a stop, the 2017 Acura MDX takes only 6.4 seconds to hit 60 mph. You can also look forward to getting up to 27 mpg.

Last year, the MDX’s nine-speed automatic transmission suffered from a few performance issues. It often had trouble choosing between gears. Thankfully, Acura has fixed this issue by updating the ECU’s software. The transmission now delivers a smooth performance at all speeds. If you attempt to pass a vehicle on the highway, the transmission immediately shifts down to a lower gear.

While the SUV comes standard with front-wheel drive, the optional Super Handling AWD system will intrigue a lot of drivers. Not only does the advanced AWD system transform the MDX into a solid performer in the snow, but it also enhances the crossover’s handling. Furthermore, the AWD system only slightly lowers the MDX’s overall fuel economy.

Over the years, Acura has become known for developing dependable vehicles. You can expect the 2017 Acura MDX to remain one of the most reliable SUVs in its class. When serviced on a regular basis, it will be able to surpass 200,000 miles with ease. Owners only report a small number of minor problems.

The all-new Sport Hybrid model has created a lot of buzz. It is engineered to deliver great fuel economy without sacrificing any performance. According to sources, the Sport Hybrid version will return an extra seven miles-per-gallon in the city. You can also expect the fuel-efficient crossover to develop in excess of 300 horsepower. An adaptive suspension system makes the Sport Hybrid model even more appealing.

Acura was able to give the new MDX a sharper appearance. It boasts a sportier grille and reshaped “Jewel Eye” headlamps. For the first time, buyers can opt for a stylish set of 20-inch wheels. LED fog lights are also available with the Advance package. Some of the signature paint colors include Fathom Blue, Dark Cherry, and Black Copper.

Your family will look forwarding to riding in the 2017 Acura MDX. Aside from crossover’s abundance of passenger room, it also provides outstanding seat comfort. Everyone will be able to remain relaxed throughout the entire day. While heated front seats come standard, the available ventilated seats will help you to remain cool on hot days.

If you find the fully loaded version’s $57,000 price tag to be a bit expensive, save some money by sticking with the base model. Some of the standard features include a dual-screen infotainment system, an eight-speaker sound system, and leather upholstery. Like the higher trim levels, the base model offers great passenger safety and a satisfying degree of performance.

The 2017 Acura MDX scored a five-star safety rating for its superior crash protection. It was also honored as a Top Safety Pick+ by the IIHS. Your family will be shielded by an extra barrier of protection. To make the new MSX an even better bargain, the AcuraWatch safety package now comes standard. You will be rewarded with goodies such as automatic braking and lane departure prevention.

Drivers applaud the MDX for its high-quality design. You can expect the interior trim to withstand the test of time. Even after owning the MDX for a few years, you are unlikely to hear any creaks or rattles from inside the cabin.
Buying Tip: To avoid overpaying on a new car, shop prices online first. Get up front pricing before you walk into a dealership. We recommend the following free services; Car Clearance Deals, NADAguides, CarsDirect & Motortrend.
These free services will offer you the lowest prices and supply you with multiple competing price quotes. You will know the best price before you visit the dealer.

If you are looking for a tough-nosed SUV that can handle extremely rough terrain, the Acura MDX is not the most suitable choice. While the MDX can tackle a muddy trail, it lacks the necessary hardware to topple challenging landscapes. You won’t be able to get off-road features such as hill descent control.

The 2017 Volvo XC90 and the new Audi Q7 compete against the Acura MDX. Neither of these three-row SUVs can match the MDX’s reputation for being reliable. While the hybrid version of the Volvo XC90 is impressive, it has a more expensive price tag than the new MDX Sport Hybrid.

There are plenty of reasons why you should give the 2017 Acura MDX a test drive. It is stylish, relatively quick, and good on gas. For the drivers who want to live an eco-friendly lifestyle, the all-new Sport Hybrid model will get their attention. Premium upgrades, such as a 16.2-inch display screen and a 12-speaker audio system, take the MDX’s luxuriousness to the next level.
2017 Acura Buying Guides:
• 2017 Acura MDX Buying Guide
• 2017 Acura NSX Buying Guide