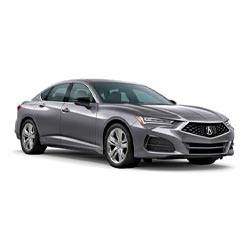 What 2021 Acura TLX Trim Level Should you Buy? What is the Difference Between Trims?

As a sport sedan, the 2021 Acura TLX has some striking good looks. It's elegant and modern at the same time, and it has enough high-end amenities to push it into the luxury car category. There's no need to be scared off by the "luxury" label, though, since the base TLX has a starting price that's well under $40,000. This is a reasonable cost for many customers, and those willing to spend more can get many upgrades with their TLX cars.

Acura doesn't use the term "trim" for its various versions of the TLX. Instead, it has packages that can be added on to what the base model offers. Essentially, it's the same thing as offering trims, and for the purposes of this overview, the word "trim" will be used for convenience.

Each TLX can come with either a front-wheel or all-wheel drivetrain. The all-wheel drivetrain is officially called Super Handling All-Wheel Drive (SH-AWD), and trims with SH-AWD are approximately two thousands dollars more expensive than their FWD counterparts.

SH-AWD is always working so it can be ready to make appropriate adjustments to how power is delivered to the wheels. When the roads are clear and the car is driving in a straight line, almost all of the power is sent to the front wheels to keep things running efficiently. When drivers are taking turns at higher speeds, accelerating quickly, or dealing with rough conditions, a certain amount of power can be sent to the rear wheels. This can improve traction, stability, and handling. This is especially the case because the system can send power to individual wheels. When driving around a curve, for instance, it can be beneficial for the outside wheel to have more torque sent to it.


Compare the 2021 Acura TLX vs TLX with Technology. What is the Difference?

The base model and the Technology trim, just like all the other TLX models, run on 2.0-liter turbocharged engines. These engines have four cylinders and 16 valves, and they're quite powerful. Able to generate 272 horsepower and 280 pound-feet of torque, this engine gives the TLX a lot of zip.

Fuel efficiency isn't a strength with the TLX, but it's not bad either. Front-wheel drive versions can achieve an estimated 22/31 (city/highway) miles per gallon. All-wheel drive models see a reduction in one mile per gallon for both city and highway mileage. This is a trade-off that many people will accept, given the benefits of all-wheel drive described above.

Adding to the race car vibe of the TLX is an automatic transmission with ten speeds. Left to work on its own, the transmission will shift gears at precisely the right time to ensure a smooth drive. If any drivers prefer to be in control of these transitions, there are paddle shifters included on every TLX trim. Additionally, there is a Comfort drive mode that would probably be the default mode for most drivers, with the Sport drive mode resulting in more aggressive acceleration and a more responsive feel.

How exactly does this climate system work with GPS? With GPS and an integrated solar sensor, the car knows where the sun's position is and how it might affect the interior temperature of the cabin. The climate system can compensate for that additional heat, or lack of heat, so that passengers can stay comfortable.

The Technology trim, as one would expect from its name, has many other high-tech components. Its technology package includes navigation with a 3D view, and this provides the driver with easy-to-understand turn-by-turn directions. To access directions, people can use the True Touchpad Interface or voice commands. The navigation program can work even where there isn't any cell reception, as there's a hard drive that it can call upon for information. There is the ability to take real-time traffic into account so that people don't find themselves stuck on congested roads.

All that being said, the base model still has impressive offerings in this department. It comes with a 10.2-inch screen, smartphone compatibility, Bluetooth, and SiriusXM Satellite Radio. It has ten speakers, as opposed to the Technology trim's 13 speakers. It also has the ability to act as a Wi-Fi hotspot, eliminating the need for people to drain their cell phones' data plans while they're traveling.

Another attractive aspect to driving an Acura TLX is that people get to connect their smartphones with the cars in more ways than one. Through the AcuraLink app on a smartphone, a driver can lock or unlock the doors, send address information to the navigation program, check on mileage and fuel reserves, and see what the tire pressure is.

From a safety standpoint, the TLX is attractive. Every trim has an automatic braking system that can reduce the likelihood of drivers hitting vehicles or pedestrians in front of them. The trims have adaptive cruise control, a lane keeping system, and the ability to read road signs and display that information on one of the car's displays.

The Technology trim has even more in this department. Its parking sensors will alert drivers if they're getting too close to objects in front of or behind them, and blind spot and rear cross-traffic monitoring can help people know what's around them.

Compare the 2021 Acura TLX with Technology vs A-Spec Trim Level. What is the Difference?

Wheels on both the Technology and A-Spec trims are 19 inches, but the A-Spec has ones that are Shark Gray instead of a Sparkle Silver Metallic color. Dark chrome is found in various places on the exterior of the A-Spec to give it more of a sleek appearance. It has LED fog lights to improve visibility at certain times, and its the first trim to have a decklid spoiler. Enhancing the sporty nature of the A-Spec is an exclusive rear diffuser.

Inside the cabin, the A-Spec has nicer seats. Made with the same Milano leather seen in the Technology trim, the A-Spec's seats are upgraded with ultrasuede inserts and have contrast piping in addition to the contrast stitching. The A-Spec's front seats are heated and ventilated for added comfort at all times of the year.

A number of features make the A-Spec feel more like a premium sports car. It has stainless steel pedals that shine, as well as a flat-bottomed steering wheel that has a distinct design. Rather than having a plain aluminum trim like the Technology, the A-Spec has an aluminum trim with a geometric design. The ebony headliner adds a more upscale aesthetic to the car, which has special A-Spec badging on the steering wheel and door sills.

With 17 speakers, the A-Spec has a better sound system than the Technology trim has. It also has wireless charging. These two components may be important to some prospective buyers.

Compare the 2021 Acura TLX A-Spec vs Advance Trim. What is the Difference?

The Advance Package is the most attractive out of the bunch, but it's also the most expensive. For the added cost, one of the benefits is having an adaptive damper system. This system lets the suspension immediately adjust to what the road conditions are. Sensors are constantly monitoring how things are going, and a valve is used to increase or decrease the damper fluid pressure. With the Sport driving mode engaged, the damper system will automatically lean towards giving a driver a stiffer ride.

The wheels on the Advance are the nicest, though it may be a matter of opinion. They're 19 inches, just like what's seen on the other two packages. They're machine-finished and have a Pewter Gray Metallic design. Plus, the Advance is the only trim with LED puddle lights and side mirrors that can fold themselves in. Some other things exclusive to the Advance are windshield wipers that can turn themselves on whenever they sense rain and a de-icer mechanism built into those wipers.

Seats on the Advance may look the same as those on the A-Spec, but the Advance's front seats can move in more ways. They're 16-way power-adjustable versions, with thigh extensions and side bolsters. This is an upgraded version of the A-Spec's 12-way seats. Not only are the front seats in the Advance heated and ventilated, but the rear seats are also heated. Adding to the elegant aesthetic of the Advance's cabin is an open-pore wood trim.

There are a few things that the Advance has that the A-Spec does not in the technology category. The Advance has a head-up display that can project certain kinds of information on the windshield behind the steering wheel. This adds to the safety aspect of the car, as it means the driver doesn't have to constantly look down and all around to stay aware of what's going on.

The Advance also has a surround-view camera, which uses the video feed from four different cameras to give the driver a 360-degree perspective. This can be key when trying to perform a perfect parking job. It's simple to switch camera views, and the rear camera even comes with a washer to ensure that the video feed comes through clearly.

Considering all of the features that can be found on the car, the 2021 Acura TLX is a solid choice for anyone who likes high-performing vehicles. While the TLX doesn't have extremely bold details, it does have a sleek aesthetic. Its more refined appearance is enhanced by its compact size, its angular lines, and its narrow "Jewel Eye" LED headlights.

The base model would be a great choice for those who like its sophistication and don't need any of the extra features, like navigation or leather seats. Having leatherette seats can be good enough for many people, and the infotainment and safety systems are advanced enough to please most customers. The low price point of the base model, which is about $4,000 cheaper than the Technology trim, can't be ignored.

People who have more cash to spend and want more premium components might as well go with the Advance. This gives them the advanced suspension system, which can result in significantly better handling. In addition, it comes with the most upscale elements, like the 16-way seats, a head-up display, and 360-degree camera view. These certainly aren't necessary by any means, but they can be fun to use.

The Advance is priced at $46,300, so it's still within the budget of many buyers. This may seem expensive to some, but it's all relative, and it's cheaper than the price point of many competitors in the luxury market.