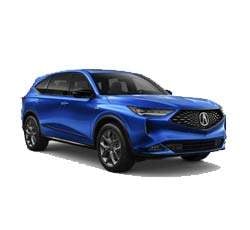 Should You Buy a 2022 Acura MDX? Here Are Some Reasons For and Against

The former generation of the Acura MDX was formidable but lacked some of the key characteristics inherent in its competition. A strong base engine? Nope. High-quality interior materials? Not quite. Much third-row space? Not at all. But the 2022 Acura MDX has been fully redesigned, giving you a sportier exterior and a more high-brow, current-gen interior with technology that is more user-friendly than ever before. There are a lot of things to enjoy about the new MDX but a few things that still hold it back from perfection. Read on to find out what's new, what there is to like and dislike, and how the new MDX stacks up against a few other luxury third-row SUVs.

A lot is new for 2022, and we could not be more ecstatic. On the outside, there is a whole new styling. The front and rear fascia have been re-sculpted for increased aerodynamics and athletic appeal. With the body having been lengthened and widened, more room opens up in the cabin for leg space, which is beneficial for third-row occupants. Also, with its new 12.3-inch infotainment touchscreen system, the MDX really steps its game up in the tech realm. Looming on the horizon later this model year is the high-powered Type S model, which is sure to appease those craving more power.

The 2022 Acura MDX looks a lot more like its rivals than ever before, showing new athleticism and aerodynamics in its revised exterior design. The hood has a different sculpture, and the lights have been reshaped. Its lines are a lot smoother and make this luxury vehicle look luxurious just from the outside. With some new color options available, the MDX can be quite eye-catching.

With the body being stiffened, lengthened, and widened, the MDX offers a more spacious cabin than its previous iteration. The MDX now gives occupants in all three rows more leg room. That's right, even adults can now fit comfortably into the third row. This is something that other third-row SUVs have yet to accomplish, so Acura sets the bar high in terms of passenger space.

Due to be released midway through the model year, the MDX Type S will give drivers the opportunity to buy a more high-powered version of the MDX. The Type S will come with a turbocharged 3.0-L V6 paired up with Super Handling All Wheel Drive (SH-AWD) and will generate 355 hp and 354 lb-ft of torque. This should feel much zippier than the MDX's base engine and will be sportier with its upgraded brakes and wider tire size.

Speaking of SH-AWD, this system is optional for the two lower trim levels (the base MDX and the Technology) and standard on the higher trims (the A-Spec and the Advance). In all honestly, for the extra $2,000, it might be worth it to add it to a lower trim level. SH-AWD gives you improved vehicle stability and traction control, making it ideal for anyone who has to drive over slick surfaces a lot. While the low ground clearance doesn't make this vehicle a capable off-roader, it can definitely handle some light-duty dirt road driving with SH-AWD equipped.

The panoramic sunroof used to be optional, but now it comes standard on every trim level. It does cut down a little bit on head room for second-row occupants, but the trade-off is that it allows in an abundance of light. It is easy to operate and can allow in extra air on a pleasantly warm day.

6. Comfy Seats In All Three Rows

One of Acura's greatest strengths is creating comfortable seats throughout the entire cabin. All of the seats are soft but padded for support. The higher trims give you a lot of seat bolstering up front. The lowered floor for the third row lends to some extra spatial comfort, but even the third row of seats themselves are cozy. Many third-row seats are rather flat and unsupportive, so it is refreshing to see Acura putting so much effort into creating comfort.

Buyers wanting a vehicle they can customize with some neat color options might be interested in what the MDX has to offer. New exterior color options include Phantom Violet Pearl and the A-Spec's unique Apex Blue Pearl. Aside from the usual black and gray interior combo, you can get a creamy white tone, a stunning dark brown, and a sporty red and black pairing on the A-Spec.

The second row gives you some configurability as it is both able to fold down flat or be outright removed if you need to max out cargo space. Bulky items can easily be stored in its place. You can also fold the middle seat down flat if you need a walkway through to the third row seats.

The optional head-up display is all new and can be equipped on the Advance package. It will display your text messages, phone calls, and - of course - your vehicle's performance information. The cool part? It gets projected onto the windshield in front of your eyes, which takes the hassle out of looking down and away from the road.

1. A Lackluster Base Engine

The biggest drawback to buying the 2022 Acura MDX is the underwhelming base engine. This 3.5-L V6 generates 290 hp and 267 lb-ft of torque and is paired with a new 10-speed automatic transmission. Unfortunately, this engine did not get upgraded in the overhaul and desperately needed it. The acceleration is somewhat boring, and the engine can get loud when you press down on the accelerator.

2. The Sport Hybrid is Gone

The Sport Hybrid is no more. For some reason, Acura decided that it would not return for the 2022 overhaul. Instead, you will get the Type S option midway through the year, and it will not be as fuel-savvy, as it trades fuel economy for sportiness. Anyone looking for a hybrid powertrain will have to look elsewhere.

3. Awkward Placing of the Center Armrest

This is a minor gripe, but shorter front seat occupants might find that the center armrest is situated a little too far back for their elbows. The placement just seems awkward and slightly uncomfortable. The bulk of the center console really doesn't help matters.

Fuel efficiency is not the MDX's strong suit. The 3.5-L V6 is actually thirstier for gas than it used to be with FWD models getting about 22 mpg combined and AWDs getting 21 mpg combined. Each one has a 1 mpg drop from the previous generation's V6. In a segment where fuel efficiency is becoming more of a deciding factor for buyers, Acura should be boosting numbers, not letting them fall.

Priced around the same range as the MDX, the 2022 Audi Q7 offers superior interior design elements and an overall excellent build quality. The ride quality is also excels. With the abundance of standard infotainment and safety features equipped, it is hard to deny the Q7's appeal. Its sporty handling makes it even more attractive. However, buyers might not be impressed with its cramped third row of seats, its lacking cargo space, and its distracting infotainment system.

If you like the MDX but cannot afford the price tag, the 2022 Honda Pilot is basically its non-luxury equivalent. But don't get it twisted, the Pilot can border on luxury. It offers an incredibly spacious interior set-up with some high-quality materials. The ride feels compliant and smooth thanks to the well-tuned suspension, and its fuel economy is one of the best in the third-row segment. Not to mention you also get a ton of versatility in the cargo area. The downsides? Access to the third row is somewhat narrow, and the collision mitigation warning can be a bit intrusive.

The 2022 Acura MDX's redesign is a welcomed one, but we wish the automaker would have equipped an engine that better balances fuel economy and power. One more like the Honda Pilot's would have made the MDX's redesign a genuine blast. However, we consider this model year to be a good one full of a lot of strong interior design choices and great technological enhancements. All in all, the MDX is likely to be a strong contender in its segment this model year. The Type S will be a welcome addition to the line-up when it makes its debut.


Are you Shopping for a New Vehicle? Find the Best Deals with "Free - No Hassle" Prices Quotes.

View Pros and Cons for other Acura Models: