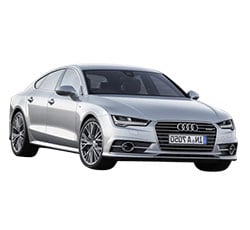 Should You Buy a 2017 Audi S7? Here Are Some Reasons For and Against

The 2017 Audi S7 is one of the top luxury sedans available today. Power, style, engineering—the S7 has it all. It demands attention immediately, and it continues to astonish long after the first drive. The luxury sedan market is crowded with worthy competitors from around the globe, so what sets this vehicle apart? There are a number of great reasons for drivers to consider the 2017 Audi S7, and also a few reasons that might give them pause.

For the 2017 model year, Audi has added a second trim package to the S7, giving prospective drivers more options for customizing their vehicle. This new trim level, the Prestige package, includes 20-inch wheels fitted with high-performance tires, a heads-up display, and more.

The 2017 Audi S7 is among the most beautiful vehicles on the road today. It combines the aggressive and athletic features of other high-performance cars with the elegance of luxury cruisers. The S7’s smooth lines start at its sleek, low nose and continue along its swooping roofline and on to its sleek, seamless rear hatch. Chrome trim and flared fenders complete the Audi S7’s distinctive outer styling.

The interior of the 2017 S7 exemplifies luxury and design elegance. The quality of materials is stellar from front to back. Its seats are equality comfortable and supportive, both on the highway and the track. Optional massaging contour seats and a heated steering wheel push the S7’s luxury feel even higher.

The powerful, throaty engine of the 2017 Audi S7 is perhaps its best feature. A twin-turbo, 4.0-liter V8, the S7’s powerplant generates a remarkable 450 horsepower and 406 pound-feet of torque. It roars from 0-60 in a scant 4.3 seconds, and its rumbling, low-pitched growl sounds great at all RPM’s.

Audi’s state of the art 7-speed S-Tronic transmission ensures all of the S7’s power makes it effortlessly from the engine to the road. The vehicle shifts smoothly and seamlessly at all speeds, ensuring a pleasurable driving experience both in traffic and on open roads.

The 2017 Audi S7 features an adaptive air suspension that delivers a smooth ride. Even over uneven ground and around tight corners, the S7’s ride is comfortable, and it doesn’t sacrifice responsiveness. Drivers can be confident that if they need to make a quick maneuver, the S7 will respond.

For a vehicle with such a large and powerful engine, the 2017 Audi S7 gets remarkably good gas mileage. Its 21 combined miles per gallon fuel economy certainly won’t compete with the compact hybrids of the world, but in a vehicle this large and this fast it is more than respectable.

The 2017 S7 comes equipped with the antilock disc brakes and full airbag suite that drivers have come to expect, but it does not stop there. Its Pre-Sense Basic system warns drivers before accidents happen, and even pre-tenses seatbelts to protect occupants better. An optional Pre-Sense Plus system will even brake by itself before a collision to make any impact less severe.

Hatchbacks are often thought of as practical body types, but not particularly stylish ones. The beauty of the S7’s design is that the rear hatch seamlessly integrates into the car’s lines, so it is practically unnoticeable when closed. When opened, however, the S7’s rear hatch reveals a considerable storage area that is incredibly easy to access.

9. Wide Range of Packages and Options

The 2017 Audi S7 is a great vehicle even in its bone-standard model. However, Audi has seen fit to offer a wide range of packages and stand-alone options to allow drivers to make the S7 their own. In addition to the above-mentioned new Prestige package, Audi also offers a Cold Weather Package adds features to keep occupants warm, and the Driver Assistance Package helps keep them even safer. A Sport Package adds performance and cosmetic features like dynamic steering and a high-output exhaust.

Not all of the 2017 Audi S7’s modern engineering is found underneath the hood. The vehicle features an array of modern sensors, multiple connectivity options, and a high-quality audio system. All of these high-tech features are anchored in the S7’s center console control system, the Audi MMI. Short for the Audi Multi-Media Interface, this system features an 8-inch, easy to use screen that puts the controls of everything from the rear facing camera to the Bluetooth-equipped sound system at the driver’s fingertips.

The 2017 Audi S7 is a large, heavy automobile. As a result, the handling is perhaps a bit sluggish around tight corners. If the other aspects of the vehicle’s performance were not so exemplary, perhaps the somewhat vague steering might not be quite as noticeable.

Sacrifices are bound to happen, even on a vehicle this extravagant. The low, sleek roofline of the 2017 Audi S7 looks beautiful from the outside, but it accomplishes this by making the cabin that much smaller. The front-row occupants won’t notice any problems, but taller passengers in the back might find themselves a bit cramped.

The 2017 Audi S7 makes very few compromises. It is engineered to the highest standards, and its performance is second to none. Unfortunately, all this quality does not come cheap. Especially when fully equipped, the S7 is a very expensive automobile.

The luxury sedan market is a competitive one, filled with heavy hitting competitors, each coming with equally big names. The 2017 S7 compares very favorably to all of them. The BMW M6, one of its closest competitors, boasts a more powerful engine, but the S7 is lighter, which translates into comparable performance. Even better, the S7’s lighter weight translates to far better fuel economy than the M6, and the S7 also has a lower purchase price. The S7 also beats out the Cadillac CTS-V in both fuel economy and storage space.

The 2017 Audi S7 is a luxury sedan that anyone can love. It combines performance and elegance with top of its class utility and fuel economy. It is a joy to drive and offers a wealth of modern, high-tech options. It is an expensive automobile, but also one high in value, and one that drivers will love to take onto the road.