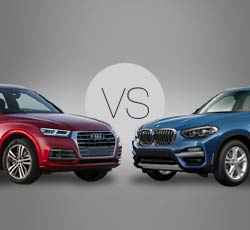 If you've been browsing the market for a new small luxury SUV, you have likely already come across both the 2020 AUdi Q5 and the 2020 BMW X3. They are two of the top contenders in this segment, and for quite a few good reasons. Both have strong and capable powertrains and are packed with standard infotainment and safety features. But they also have some pitfalls.

Let us kick-start this review by going over the different powertrain choices. The 2020 Audi Q5 is powered by a turbocharged 2.0-L 4-cylinder engine. Said engine can get a respectable 248 hp and 273 lb-ft of torque. It is paired up with a 7-speed dual clutch automatic transmission and all-wheel drive. If you prefer hybrids, there is a new PHEV that is powered by the same turbo engine but has a hybrid power boost that gets it to 349 hp and 369 lb-ft of torque. You can get 20 miles of electric-only power on the PHEV. As for the Q5's gas-only engine, it can get from 0 to 60 mph in 6.2 seconds. This is a pretty respectable showing for this segment.

The 2020 BMW X3 is powered by a turbocharged 2.0-L 4-cylinder engine on the sDrive30i and xDrive30i (which has all-wheel drive while the former is real-wheel drive). If you want to upgrade, you can get the M40i with its 3.0-L 6-cylinder engine. Either way, you get an 8-speed automatic transmission equipped. This particular engine generates 248 hp and 258 lb-ft of torque. Want something even more powerful? Then know that the 3.0-L on the M40i gets 355 hp and 369 lb-ft of torque. The 2.0-L engine is able to get the vehicle from 0 to 60 mph in 6 seconds flat, and the 3.0-L is even faster, definitely besting what you get on the Audi Q5.

Both vehicles put out solid driving performances, but there are some notable differences between them. The Q5 is quick to accelerate, as we have already mentioned, but can obviously be bested by the X3's M40i. However, the driving performance from the Q5 feels smooth and powerful enough. The dual-clutch provides seamless transmissions between gears, and the brakes are easy to modulate is basically any driving situation. You will never feel like the pedal is going soft and squishy beneath your foot.

The Q5 also has some strong handling capabilities. It might not be as sporty as other small SUVs, but you always know how the wheels are tracking. And the wheels are excellent at absorbing shocks, along with the five-link front and rear suspension system that is equipped. Every mechanical element comes across as being well-tuned and supporting the engine in its pumping out of power.

Also, driving the Q5 feels easy breezy since it is a smaller SUV. You won't struggle with getting it into or out of a tight parking space. Visibility to the outside is pretty clear, and even the blind spots seem small.

The X3 keeps pace well with the Q5 in terms of driving performance. The 8-speed automatic transmission goes through seamless gear shifts, helping the engine pump out enough power. You can modulate the brakes well in any given situation, and they hold up tight under duress while making a panic stop. The stopping distance is also a safe one.

Handling and steering are everything you should expect from a current BMW - smooth and effortless. You get a good amount of feedback coming through the steering wheel when you switch it into Sport mode, and the handling feels nicely composed. The only point to be shaved off is for how quickly the wheel turns in Comfort mode, which can lead to you misjudging a turn. Comfort mode just is not all that comfortable.

One element of drivability that cannot be ignored is how well the cabin is constructed. The BMW X3 has a busy ride quality while going over rougher road surfaces but feels fine on smoother ones. The Dynamic Handling package (which is optional) might be at fault for some of the excessive busy-ness you feel if you have it equipped. The cabin is pleasant overall though, with the seats providing ample support and the exterior noise being kept to a minimum. You might hear a small amount of wind noise while cruising at highway speeds, and the engine's hum is nothing intrusive.

As far as the Q5's interior goes, it is packed with comfort. Although the seats might feel kind of firm, they are built with a ton of support. If you opt for the ventilated seats, the leather seats will feel nice and cool on hot days. The cabin does not let much noise in. There is almost no wind and road noise that makes its way in, even at highway speeds. And the engine? It simply purrs. Take it up to full throttle and you will just get a satisfying growl. And, although the cabin might not seem like it would be spacious from the exterior, you will be pleasantly surprised to find out how cavernous it is once you slide inside.

Technology is a huge part of driving now as well. As you might reasonably imagine, these two luxury SUVs pack a ton of standard luxury features in. For starters, the 2020 Audi Q5 has an array of easy-to-use technology. The cabin has a clean line-up of controls and the MMI Infotainment System has an intuitively laid-out menu with big, bright buttons that are easy to push while you are driving. Android Auto and Apple CarPlay are standard, so you can sync your smartphone apps and use them with the infotainment system.

The X3 has a plethora of standard tech features as well. It has a mixed analogue and digital gauge cluster that has a simple and clean design that looks chic. The infotainment system is easy to use, and it follows voice recognition prompts quite well. However, Android Auto is not available on the X3, so only iPhone users can sync their apps with the X3.

Of course, safety features are incredibly important things to consider while you are searching for a new vehicle. Audi and BMW load up their vehicles with them since, of course, this is not just going to help sell a vehicle but keep drivers safe on the road. So, which features do each of these vehicles include? Let's find out.

Starting off with the 2020 BMW X3, the base trim treats you to LED foglights and headlights, as well as a rear-view camera. But that is far from all. Other safety features included on the X3 range from front an rear park distance control to adaptive brakelights. There are also, programmable LED daytime running lights, an anti-theft alarm system, BMW Assist eCall (which bundles features like a SOS button), and front collision warning as part of the Active Guard bundle.

The 2020 Audi Q5 has an abundance of safety features and driver aids rolled into its neat little package as well. On the base Premium trim lone, you get keyless engine start/stop, Audi drive select, Audi pre sense basic, Audi pre sense city, hill descent control, and a rear-view camera. The higher up you go in the trim levels, the more features you get equipped.

As far as safety ratings go,the Q5 received a full five star rating from the Insurance Institute for Highway Safety (IIHS). It only got marked down for the headlights, which received a "Marginal" score instead of "Good." The National Highway Traffic and Safety Administration (NHTSA) also gave the Q5 a five-star rating and five full stars on each of its crash tests.

The BMW X3 also received pretty good ratings. The IIHS only marked the X3 down for having an "Acceptable" LATCH child car safety seat system; otherwise, every aspect of its testing earned the X3 a "Good" rating. The NHTSA gave it five stars overall, but it ticked one star off for the Front Driver Side. The X3 also had a slightly smaller rollover risk than the Audi Q5, though both were in a fairly normal - and safe - range. Overall, both vehicles can be considered pretty safe to drive and have minimal issues.

Now it is time to go over which vehicle has the better bang for your buck. The value is pretty similar between the two vehicles, but the Q5 slightly edges out the X3. Everything about the Q5 reeks of consistency and durability, not to mention luxury. It is also somewhat more loaded with standard infotainment and safety features, and you will not have to shell out extra money for optional packages like you will on the X3. However, the X3 does have the additional perk of longer free scheduled maintenance than the Q5.

There is no denying the fact that these are both excellent vehicles. In fact, they are two of the top contenders in the small SUV segment. They both have strong engine options, decent fuel economy, and an abundance of standard features. It really is no wonder that people continue to buy the Q5 and X3 year after year. They tend to stand up to the test of time.

But there is one option that does do slightly better than the other, and this model year, that honor goes to the 2020 Audi Q5. It might not have the beefed up engine option that you can get on the X3, but the Q5 is still a solid performer. Its sole engine option is a capable one, and the standard all-wheel drive is perfect for those who live in climates where inclement weather can cause chaos on the roads. The Q5 is also quite the capable off-roader.

The Q5 also packs slightly more in, in terms of standard safety and infotainment features. This gives you a bit more bang for your buck since most drivers will be focused on getting as many of these features as they possibly can. You will not have to spend a bunch of money on optional packages, which is something you might have to consider ding on the 2020 BMW X3.

All in all, the 2020 Audi Q5 is a smart purchase, and it will likely be a popular one this model year. While the X3 is a tough competitor, it will see some stiff rivalry once again with the Audi Q5 as it has in model years past.