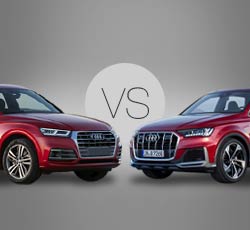 Audi is brand that is well-known for making luxury vehicles. Driving one means getting exhilarating performance, sophisticated style, and top-notch cabins. These qualities are found in their SUV offerings, making them popular with many families of all sizes.

Both the 2020 Audi Q5 and the 2020 Audi Q7 are luxury SUV offerings. These two vehicles both contain the qualities that are distinctive of the brand. At the same time, there are significant differences between the two, including the number of people they will seat and their available powertrains.

The differences do not end there, however. Although some may be subtle, others are likely to be significant enough to draw some buyers to one option over the other. A deeper examination of both options is in order to make the choice that will keep the whole family happy in the years to come.

Audi's naming system may not be the most creative, but it does give buyers a few clues about what they will be looking at. The SUV family has names that start with a Q and are followed by a number. The higher the number, the larger the vehicle. While the Q5 is a two-row option with room for five, the larger Q7 has three rows and room for up to seven.

Both offerings give buyers a good amount of space to get comfortable in their available seats. The front of the Q5 actually offers a bit more headroom, but is slightly smaller than the Q7 when it comes to leg and shoulder room. Moving into the second-row, the Q7 wins in all three measurements. The third-row of the Q7 is best saved for children. It has only 29.2-inches of legroom, hardly enough for your average adult to feel comfortable with.

It is not surprising that the Q7 can pack in more cargo, but buyers should know that both of these SUVs lag a bit behind other offerings in their class. Behind the second-row of the Q5, drivers get 25.1 cubic feet. To get the maximum space possible, the second-row can be folded down to reveal 53.1 cubic feet.

Those who only need room for five that opt for the Q7 can keep that third-row folded down. This will give them 30.5 cubic feet to work with. When both back rows of seating have been folded down, buyers get 72.4 cubic feet total to fill with their groceries, luggage, and other miscellaneous gear.

Buyers who are concerned about maneuverability will want to consider the exterior dimensions of these two vehicles. The Q5 is 184" long, while the Q7 jumps all the way up to 199". As for width, the Q5 is 75" and the Q7 is 78". Accordingly, the Q5 is going to be easier to squeeze into tight parking spaces.

Both the 2020 Q5 and the 2020 Q7 have several stylish and useful exterior features available. Buyers can get either with aluminum roof rails and a panoramic sunroof, for example. They both also have a power liftgate available to help simplify loading and unloading the vehicle.

The standard engine for the Q5 and the Q7 is actually the same. Both have a 2.0L inline-four that can produce 248-horsepower and 273 lb-ft of torque. Considering the fact that the Q7 is larger and therefore heavier, it is no surprise that it does not accelerate as quickly with this engine as the Q5 does. Either of these SUVs can tow up to 4,400 pounds if they are properly equipped.

Available engines is where things start to really differ between the Q5 and the Q7. In the Q5, buyers have the option of going with a plug-in hybrid variation of the standard engine. Not only does the addition of an electric motor help with fuel economy, but it also gives power quite the boost. These models give drivers 362-horsepower along wtih 369 lb-ft of torque.

Buyers will not have the option of going with a hybrid if they select the Q7. Instead, the can elect to go with a 3.0L six-cylinder that makes 335-horsepower and 369 lb-ft of torque. Drivers who only need room for up to five should go with the Q5's optional engine over that of the Q7 if they want as much power as possible.

With the plug-in hybrid engine variation, the Q5 can give drivers up to 27mpg combined for their commutes. As for the Audi Q7's V6, it will need frequent trips to the gas station. It is estimated to get only 17mpg city and 21mpg highway, for a disappointing combined estimate of just 18mpg.

One of the reasons that buyers are attracted to both the Q5 and the Q7 is its standard drivetrain. They both come with Audi's advanced Quattro all-wheel-drive setup. This system claims to be better than the average AWD by constantly monitoring changing road conditions and making quick changes as needed. In theory, this increases traction in both wet and dry conditions.

Both of these SUVs handle well and do not jostle passengers on most road surfaces. Buyers can get an adaptive air suspension on either the Q5 or the Q7 as well. This advanced suspension has the ability to raise and lower ride height, depending on the needs of the driver and situation.

In many ways, the interior tech options for the 2020 Q5 and the 2020 Q7 are the same. They both have standard Android Auto, Apple CarPlay, and Bluetooth capabilities. One major difference, however, involves the standard touchscreen. For the Q5, the entry-level model comes equipped with a 7-inch one. An 8.3-inch is standard for the Prestige trim.

As for the Q7, its standard setup includes dual-screens. The upper one is 10.1-inches, while the lower is 8.6-inches. This touchscreen can be found inside the cabins of the entire Q7 line in 2020.

Both of these SUVs have a ten-speaker stereo system standard. They both also offer a premium sound system from Bang & Olufsen that features their "3D sound" technology. Due to its larger size, the Q7 gets 23 speakers with this setup, while the Q5 gets only 19.

The Audi virtual cockpit is a major selling point for their SUVs. It features a 12.3-inch high resolution instrument cluster. Drivers have the ability to customize how it displays information and can choose between different viewing modes. Buyers should note that while this is a standard feature for all models of the Q7, it is not available on the entry-level model of the Q5. It is standard on the two upper trim levels, however.

Both the Q5 and the Q7 are sold in the same three trim levels, known as the Premium, Premium Plus, and Prestige. Interior comfort features are similar across the board as well. For example, drivers will find all models come with leather upholstery, heated front seats, and power-adjustment for the driver. Tri-zone automatic climate control is also standard for both models.

For the absolute ultimate in luxury, buyers should look to the Audi Q7 Prestige model. It has an available Luxury package, which will add $6,400 to the price tag. Included within this package are features like extra power-adjustment for the front seats and upgraded leather. The front seats are also heated, ventilated, and include a massage function.

The Q7 does have some extra standard safety aids. It gets both front and rear parking sensors, as well as lane-departure warning. The larger SUV also comes with automatic high beams. Those are all available on select models of the Q5 but are not on its list of standard equipment.

Premium Plus models of either SUV add a blind-spot monitor and rear cross-traffic alert. This model of the Q5 gets the front and rear parking sensors as well. Going with the top-of-the-line Prestige trim of either the Q5 or the Q7 will mean getting a surround-view camera system and the popular head-up feature as well.

These two SUVs received the same results in crash testing from the National Highway Traffic Safety Administration. The both received five stars overall, with five stars for side crash testing. For whatever reason, the Q7 did not receive a rating for frontal crashes. The Q5 was rated at five stars. Both SUVs got four out of five stars when it came to rollover risk.

The Insurance Institute for Highway Safety also conducts crash tests. Both of these vehicles received a rating of "Good" down the line, including in roof strength, rear crash protection, and side impact. They both also received a "Superior" rating in frontal crash prevention. It is worth noting that the Q5 got a "Marginal" score for its headlights, while the Q7 did not get a rating at all.

Any buyer who regularly needs to fit more than five people in their vehicle has only one choice when it comes to the 2020 Audi Q5 and the 2020 Audi Q7. Despite having a somewhat cramped third-row, the Q7 is capable of handling those extra people. Those who only need room for five, however, have a trickier decision to make.

Those who value speed and acceleration will find that the Q5 is the way to go. Whether buyers stick with the standard engine or go with the available on, they will find that the Q5 is simply faster off the line than the Q7. It also has the added bonus of getting better fuel efficiency numbers. At the same time, the Q7 does come standard with extra safety features. It also has more impressive technology features, including those dual touchscreens. Extra cargo space is also a big draw for many consumers.

Factoring in this, it is clear to see that any buyer who can get away with seating for five should stick to the Q5. It will cost them less, both up front and over time in fuel costs. As a bonus, it is the more fun to drive of the two. Larger families who can afford the Q7 will find that it is comfortable and full of features but may have difficulty justifying that high price tag.