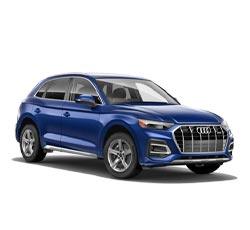 Should You Buy a 2021 Audi Q5? Here Are Some Reasons For and Against

The 2021 Audi Q5 really shines in so many ways. It has certainly earned its luxury badge with its good looks, high-end materials, advanced technology, and capable engines. Bringing the Q5 in line with some other models, Audi has made hybrid components an available part of the Q5, and this is likely to be an intriguing factor for eco-minded consumers. The Q5 hits a lot of marks as a compact SUV/crossover, and it's poised to turn a lot of heads as it hits the road.

For 2021, Audi has refreshed a few exterior features on the Q5. The grille and bumpers have been updated, as have the lights in the front and back of the SUV. Likewise, the interior has been spruced up a bit in terms of style and functionality. All trims now have wireless charging, multiple driver-assist technologies, and several monitoring systems. Perhaps the most significant change is that the engines have gotten some boosts. The standard engine now benefits from having a mild hybrid system built into it, and the hybrid powertrain has slightly more power for the 2021 model year.

The 45 TFSI models of the 2021 Audi Q5 all run on two-liter engines. These are turbocharged versions that can crank out over 260 horsepower and over 270 pound-feet of torque. Since the Q5 is relatively small for an SUV, this amount of power makes it feel athletic. Having a turbocharged engine gives the vehicle the ability to hit the 60-mph mark in under six seconds.

Audi has provided consumers with something even better than the 45 TFSI. The 55 TFSI versions of the Q5 have more than 360 horsepower and nearly 370 pound-feet of torque. These models are able to do so much because they use the same engine that the 45 TFSI uses and also have electric motors. Just like two heads are better than one, two sources of power can be more effective than one can. The 55 TFSI, which is a plug-in hybrid, can reach speeds of 60 miles per hour in only five seconds.

In an Audi Q5, quattro all-wheel drive is standard. This gives the SUV the ability to head out at all times of the year, regardless of what the conditions may be. Audi's all-wheel-drive system is a high quality one, and it's ready to make adjustments at any time. Whenever a loss of traction is detected, the engine can start to send power to the wheels that have better grip with the road.

In a way, the Audi Q5 seems like it could be at home on a race track. It's nimble and easy to control, and it has a premium suspension system so that it confidently take turns at high speeds. Audi has paired the engine with a seven-speed dual-clutch automatic transmission. These types of transmissions are commonly found on high-end vehicles that are performance-oriented, and they can make driving a lot of fun.

Even though it's a luxury model, the Q5 can still be called practical. It can work well for busy families, people who frequently drive their friends around, and anyone who needs a lot of interior room. The SUV has 41 inches of leg room in the front and nearly 38 inches of leg room in the second row. This is a pretty generous amount, and it's sure to be appreciated by any adults who have to ride in the back for long periods of time.

Behind the seating, there's an area that's set aside for holding cargo. It has a volume of over 25 cubic feet, which is a fairly substantial size. If people ever need to create more room for larger cargo, the rear seatbacks can be folded down. This expands cargo capacity to more than 53 cubic feet. Because the rear bench has a 40/20/40 split, each seatback can be folded down on its own. This makes it feasible to drive around passengers and skis, snowboards, or other large objects at the same time. There's also roof rails that can be used to secure for bulkier items.

From any angle, the Audi Q5 looks great. It has a wide stance, narrow headlights, and a prominent front grille. Roof rails and a spoiler on the tailgate add to the style in addition to being functional. 18-, 19-, or 20-inch wheels are available, and many of them have unique designs to catch people's eyes. The available illumination feature on the LED headlights and LED taillights is kind of like a cool magic trick that has a big wow factor.

7. Towing? Not a Problem

When properly equipped, the 2021 Audi Q5 can tow almost 4,500 pounds. This might surprise some who simply see the Audi as a luxury model that simply looks good and doesn't have the toughness that some other SUVs have. Being able to tow this amount gives people a lot of freedom to bring their equipment or gear with them wherever they go.

Leather seats are standard on the new Q5. This gives the cabin a refined aesthetic. Front seats are power operated and come with lumbar support, and those seats are also heated. On the higher trims, the front seats can have a sport design and ventilation in addition to heating. The back seats can even be heated so that more people can take advantage of the added warmth.

On some trims, there are some elements that can really make an impact. For instance, the power panoramic sunroof is expansive and lets in so much light. The available power-adjustable steering column is convenient to use, and it has a memory function. Ambient lighting is to be expected in cars these days. The Q5 doesn't stick with standard lighting; it has available interior lighting that has programmable LEDs.

When sitting in the Audi's cabin, it seems like technology is everywhere. There's an advanced infotainment system with smartphone compatibility and navigation, and as previously mentioned, there is wireless charging on every Q5. The Audi can come with a virtual cockpit that provides drivers with important data about their vehicles. The screen that may count the most is the center screen. It measures 10.1 inches, is responsive to touch, and can accept certain voice commands.

A variety of sensors can send out warnings if the Audi is getting too close to other objects. In some situations, the SUV can actively prevent an accident. It can do so by hitting the brakes or steering itself into a proper position after detecting an issue. The Audi can help people park perfectly, and the available 360-degree view can be useful when trying to pull in or out of tight spaces. With Park Assist, the vehicle can even park itself.

No one would assume an Audi to be cheap, but it needs to be said that the Q5 is on the more expensive side. It starts out at over $43,000, and the trims quickly go up from there. Things top out at almost $62,000 with the 55 TFSI Prestige.

Some people who are excited about the idea of driving a hybrid may quickly be disappointed when they hear the words "plug-in". The average consumer might not be that familiar with how they work because there are not a lot of plug-ins widely available. They're actually not that different from traditional vehicles in terms of how they drive, and their tanks can be filled up at the gas station. The one thing that's different is that they can also be plugged in to charge. These vehicles can be charged at home or at public charging stations.

The Audi Q5 might be considered an SUV by some and a crossover by others. The rear part of its roof line slopes down rather than being more upright like more traditional SUVs. Some buyers could find this type of roofline not as preferable as the alternative, and it somewhat limits the cargo capacity. When people are trying to pack in pieces of furniture or sports gear into the back, every inch can matter.

BMW makes a number of sporty SUVs, and its X3 is comparable in size to Audi's Q5. The X3 comes with more than one engine like the Q5 does, but its base engine isn't as powerful as the Q5s. Further, the Audi has more second-row leg room than the BMW does. Adults would probably be happier to hop in the back seat of an Audi rather than squeeze themselves into an X3.

The 45 TFSI models don't have as much horsepower and the Acura RDX has, but the 55 TFSI models do. In fact, they can beat the RDX by quite a bit. Also, there is no hybrid version of the RDX, and this could be very important for some buyers. The Acura RDX does feel elegant, if not as unique as the Q5 is.

The Q5 would be a real treat for anyone in the market for a new luxury SUV. It handles well, accelerates quickly, and can corner with ease. With two rows of seats and a sizable cargo area, it has the size that many are looking for. It gets extra points because it comes as 45 and 55 TFSI models. The 55 TFSIs are plug-in hybrids that have greatly improved efficiency.