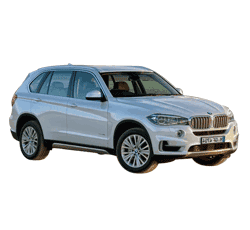 The 2014 BMW X5 begins a new generation of the popular model. The luxury SUV manages to provide the comforts and features of a high-end car with the ruggedness of a sport vehicle.

The 2014 BMW X5 has been redesigned with a sleeker appearance, more elegant interior and revised engines. The new generation retains the most popular features of those before it only with enhanced driving control.

Engine/Performance
The 2014 BMW X5 offers unique engine performance compared to many models in its class. The sDrive35i trim comes standard with a powerful six-cylinder engine. The xDrive50i model gives the option of a turbocharged V8. The diesel xDrive35d model is popular as well, providing considerable power along with impressive fuel economy.

Handling
Drivers boast that the 2014 X5 provides precise handling considering its size, with the steering system proving sharp as well. In addition to maneuvering control, the vehicle features a strong and responsive braking system. For a vehicle in the midsize class the X5 feels stable enough for safe driving while also maintaining a freedom of fun control for the driver. The handling is athletic yet smooth.

Safety
The BMW Assist program is an emergency communication feature that provides automatic crash warnings, roadside assistance and recovery options in the event that the vehicle is stolen. In brake testing, the X5 showed a shorter than average distance on sudden stops at 60 mph. The BMW X5 comes standard with a number of safety features, these include:

Comfort/Packages
The 2014 X5 comes standard with a multitude of features such as:

Many other trim styles and packages are available. The Premium package, for example, offers keyless entry, soft-closing doors and satellite radio.

Interior
The luxury SUV's interior is elegantly designed, made with materials of the best quality. It features front and back seats that offer comfort as well as ample space. Additional features include:

Exterior
Compared to the older generation the 2014 X5 model offers a seemingly smaller build. While the same size as the older version, the new model closely resembles the X3. The vehicle's upgraded design gives it a sleeker appearance. In the rear the vehicle utilizes aero blades to improve aerodynamics.

Room
Compared to previous models, the 2014 provides more room with the driver in mind. Second-row seating is spacious as well, with the upgraded interior offering a better ride for passengers. Ample legroom is provided for the first and second rows, according to many, with the second being divided into a 40/20/40 configuration.

Technology
The 2014 model is well praised for its technology. Features include a large, colorful multi-functional display for radio, mp3, navigation and more. Additionally, the iDrive controller handles common tasks at the push of a button. Optional features make safe maneuvering much easier, including the surround view camera system, lane wavering alerts and night vision with pedestrian recognition.

Towing
Although considered a luxury vehicle, the X5 is still a sport utility vehicle, thus it should be capable of handling extreme operational needs. The X5 can tow up to 6000 pounds while competitors in class, such as the Acura MDX, may only be capable of towing half as much weight.

Reasons to Not Buy a BMW X5:

Third Row Seating
While the 2014 BMW X5 does boast seating for up to seven, those expecting to pack in seven adults may need to look elsewhere. The optional third row only provides enough room to accommodate two additional child passengers; however this is not entirely unusual for a midsize SUV.

Space Debate
While some praise the vehicle's available space in the first and second rows others claim the legroom for second row passengers is not up to par. The available space may change depending on one's unique passenger cargo or the utility function of the vehicle at any particular moment.

Cargo Space
The 2014 BMW X5 is seen as having mediocre cargo space, at best. To utilize the most space possible both the second and third rows must be folded. With this option the vehicle still only provides a cargo space of 66 cubic feet. Compared to a number of models in its class, the X5 comes in below average.

While those carrying large groups or looking for expansive cargo room may be deterred, the 2014 BMW X5 proves to be an overall impressive vehicle for drivers shopping in the luxury midsize range.