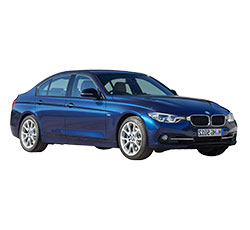 Although the 2016 BMW 3-Series doesn't represent a huge change from the previous model year, revamped plug-in hybrid packages, and other options are sure to make it popular. The 335i model is giving way to the 330i, and fans should appreciate the new interior and exterior aesthetics.

What kinds of drivers might appreciate the 2016 BMW 3-Series? Here are ten factors that make it attractive:

Sedans in the 2016 3-Series feature relatively high gas mileage for their class. According to EPA estimates, the diesel 328d gets 32/42 mpg city/highway, and the 320i's slightly lower 24/36 mpg isn't bad either. Those who want to reduce their fossil fuel dependency even more can choose from plug-in hybrids, like the 330e, and a number of engine choices provide even more flexibility.

2) Space for People and Things

Unlike sedans that force drivers to choose between carrying passengers or cargo, the 2016 BMW 3-Series apparently provides for both. Owners automatically start off with 13 cubic feet of trunk space, which is more room than some comparable sedans offer. Those who upgrade to the Sports Wagon or Gran Turismo versions get more than 50 cubic feet of space with the rear seats down. These models also come complete with powered lift gates to ease loading and a foot-activated trunk opener beneath the rear bumper.

3) Room for the Family

2016 3-Series vehicles let buyers choose from a number of comfort seating options. These vehicles accommodate up to five riders with perks like:

Reviewers also like the heightened driver seating, which may improve visibility. Even though the standard seats received ample praise for their support, the sport options offer even more ergonomic reinforcement.

Of course, lugging passengers around isn't much fun if they're not comfy. Fortunately, the 2016 BMW 3-Series is reputed to have a smooth transmission that complements its smooth engine. Reviewers also noted that the ride remained comfortably stable with a range of wheel and tire combinations.

2016 3-Series models like the 328d let drivers take advantage of tangible intensity with 180 horsepower, and the base 320i matches that rating. Interestingly enough, the hybrid 330e plug-in delivers a total of 250 horsepower between its electric motor and V4 engine. Alternatively, those who want to feel a kick can switch to the M3 for 425 horsepower.

One major design feature that sets 2016 BMW 3-Series vehicles apart is their incorporation of stiffer steering mountings. Reviewers say this gives these sedans a bit more precision at high speeds and simplifies control in highway traffic. Though different 2016 3-Series models vary regarding their agility and drive configurations, most drivers won't have problems choosing something to fit their style.

Rumor has it that BMW engineers focused heavily on improving the interior appearance of this vehicle family for 2016. The main gauges maintain the classic analog feel the automaker is known for, but 2016 BMW 3-Series instrument panels are a bit sleeker than in previous years. The console is also relatively clutter free, which makes it easier to focus on the road.

Each 2016 3-Series ships standard with the manufacturer's proprietary iDrive infotainment system. Reviewers say it's simple and easy to use compared to many rivals. Those who want to feel safer, however, can upgrade the brains of their vehicles by adding smart assistive tech, such as:

Families and routine commuters are bound to enjoy the comfort perks of the 2016 BMW 3-Series, but they're also likely to feel secure. These vehicles received four stars or higher in National Highway Traffic Safety Administration crash and rollover assessments. The Insurance Institute for Highway Safety also awarded the series a good rating on all but one of five overlap, impact, and collision-protection tests.

The 2016 3-Series vehicles' high safety ratings may be due to their numerous safety components. In addition to optional intelligent add-ons, like warnings for drivers who drift out of their lanes, these sedans include numerous airbags, ABS brakes on all four wheels and automated stability control. They also feature child-safety locks, auto leveling-headlights and mirrors with embedded turn signals.
Buying Tip: To avoid overpaying on a new car, shop prices online first. Get up front pricing before you walk into a dealership. We recommend the following free services; Car Clearance Deals,   Edmunds,   CarsDirect,   NADAguides  &  Motortrend. These free services will offer you the lowest prices and supply you with multiple competing price quotes. You will know the best price before you visit the dealer.

So what's the catch? Every vehicle has its potential downsides, and the 3-Series is no exception. Watch out for:

Numerous reviewers complained that the engine's start-stop system is choppy, which could counteract any fuel economy gains it would normally deliver. While it can be disabled, it's a shame to pay extra for features that may require a bit more engineering refinement before being consumer ready.

Although power and driving performance are hallmarks of BMW vehicles in general, some sources believe the company spent more time thinking about comfort and efficiency this year. New BMW owners may not care, but those accustomed to earlier series and models may feel like something's missing.

In the same vein, some test drivers complained that this iteration of the 3 Series wasn't as fun or consistent to drive. Versions like the 340i earned high praise in general, but they still suffered from reviews that claimed they were somewhat heavy or that their steering was looser in the center than elsewhere.

It's nice that drivers can upgrade for maximum safety. In this day and age, however, components like lane departure really ought to be included in base model vehicles. It's hard to justify BMW's decision not to build every 2016 BMW 3-Series with intelligent driver assistance options because the infotainment system comes standard.

Could the 2016 BMW 3-Series improve your driving experience for good? Find out by comparing it with other options using our comprehensive reviews.