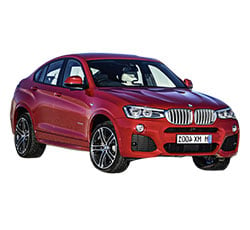 Should You Buy a 2016 BMW X4? Here Are Some Reasons For and Against

The 2016 BMW X4 is a unique SUV that has its own niche on the car market. While the new X4 is not a rugged machine, it does deliver a lot of excitement from behind the wheel. Even without a manual transmission, this crossover SUV is still able to keep the driver engaged. Decent fuel economy also makes the new X4 a good daily-driver. All-wheel drive is standard, which equates to better traction on wet pavement.

The BMW X4 just recently hit the market last year, so its styling looks virtually the same. However, the X4 does feature some new technology. Not only will prospective buyers benefit from an improved Bluetooth system, but the SUV also comes standard with a convenient Mobile Office feature.

A turbocharged 2.0-liter, four-cylinder engine comes standard on the new X4. This is the same engine used in a lot of other BMW automobiles. Many people have praised the engine for its efficient performance. It can pump out 240 horsepower while still delivering 28 mpg on the highway. The xDrive28i’s acceleration is very impressive.

The turbocharged V-6 engine offers a major power increase without compromising much efficiency. When needed, the boosted engine can supply 300 horsepower and 300 pound-feet of torque. Pushing the accelerator leads to a very quick performance. Drivers can expect to hit 60 mph in about 5.2 seconds. Some sports cars will be left in the dust.

A manual transmission is not available on the new X4. However, the eight-speed automatic transmission promises to keep driving enthusiasts satisfied. The gearbox always feels precise and responsive when cruising around the city. When it comes time to have some fun on the open road, transmission is able to shift gears faster than most humans.

For good reason, BMW refers to the new X4 as a “Sports Activity Coupe”. The X4‘s low center of gravity helps it to remain well-balanced. Drivers who want even more excitement can opt for the M-Sport package. The M-Sport package brings a sport steering wheel and a set of high-performance tires. To get the best possible handling, drivers are encouraged to consider the adaptive suspension dampers.

For the drivers who love to stay entertained, BMW’s Connected Drive system will be one of their preferred features. This innovative system allows the driver to stream music from their favorite apps. It also enables the user to easily connect to the most popular social media sites. Luckily, Connected Drive is extremely simple to use.

Some onlookers may initially think that the BMW X4 is a hatchback. However, its coupe-like design makes it a very sporty crossover vehicle. When fitted with the M-Sport package, the new X4 looks even more stunning. Buyers can even opt for 20-inch wheels. Some of the most captivating paint colors include Melbourne Red, Deep Sea Blue, and Carbon Black.

Most car shoppers will be amazed with the X4’s surplus of standard features. Designed with 16 speakers, the Harman Kardon sound system resonates throughout the entire cabin. When driving around on an everyday basis, the iDrive infotainment system will be used frequently. Some of the other standard niceties include adaptive headlamps, a power lift-gate, and a sunroof.

The Driver Assistance Plus package is for the car owners who demand a lot of advanced safety features. A surrounded-view camera helps the driver to evade obstacles. Blind-spot monitoring and a pre-collision system are also included in the package.

The BMW X4’s Variable Sport Steering system can automatically adapt to the various driving situations. For example, the steering feel becomes more relaxed when cruising along a straight stretch of road.

With a cargo capacity of 17.7 cubic feet behind the backseat, the X4 offers more space than the average family sedan. However, there are several other SUVs and hatchbacks that trump the X4's available cargo room.

A fully-loaded xDrive35i could cost upwards of $60,000. The expensive price could push away some car shoppers.

The 2016 BMW X4 is not the type of SUV that becomes lost in the crowd. Its athletic stance and muscular build will appeal to plenty of drivers. Luckily, the X4 does not burn an incredible amount of fuel. With a starting price of $45,900, the base version is a very good option. Keep in mind that AWD comes standard.
2016 BMW Buying Guides: