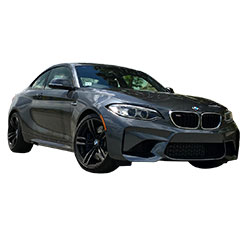 Should You Buy a 2017 BMW M2? Here Are Some Reasons For and Against

The new 2017 BMW M2 is, without a doubt, a car with a lot of character. It’s the strong silent type that would rather show you why it’s great than tell you. This is a compact powerhouse aimed at the enthusiast market while managing to stay within a semi-affordable price range. It gives a subtle nod to the E30-gen M3 but is eager to step out into the world to make a name for itself.

The 2017 BMW M2 is the second model year for the M2 series, which means not much has changed from the 2016 model year. The only true addition is the new optional Executive package, which adds wireless charging, better USB ports, Bluetooth and Wi-Fi hotspot capabilities.

The M2 is the least expensive BMW available that has the real-deal M badge, making it the entry-level option. However, the base MSRP includes nearly every option available. The only additional features come packed in the $1250 Executive package. It’s not every day that the base MSRP comes so feature packed.

2. It’s a return to form for the M series

When the E46 M3 was discontinued in 2006, there was a piece missing in the M lineup. The 2017 BMW M2 now fills that void, adopting many of the old M3’s defining characteristics, like the engine, agility, and legendary handling.

The M series is openly thought of as a performance car first, but the 2017 BMW M2 doesn’t sacrifice practical space for extra performance. The M2 comes equipped with two rear seats, though space is cramped. And the trunk is a spacious 13.7 cubic feet. It won’t carry a family of four around, but it’s practical enough to be used as a daily commuter.

This is a car that won’t get lost in a sea of clones. While its production isn’t quite as limited as that of the BMW 1M, it also isn’t being manufactured in the same numbers as the M3 and M4. As an added bonus, this means the car will have excellent resale value.

Take a look at the front of the 2017 BMW M2 and it looks almost like it’s snarling at you. It’s a car that commands fellow drivers do a double take when coming around the corner. Make no mistake, this anything but a typical BMW.

New to the 2017 BMW M2 is the Executive package, which brings a lot of modern day tech to a car that can, at times, appear dated inside. This package brings rear parking sonar, Wi-Fi hotspot capabilities, wireless mobile charging and more.

This is a car that wants to be driven. Its 3.0-liter turbocharged inline-6 engine puts out 365-hp and 369 lb-ft of torque. The auto transmission can get to 60 mph in just 4.2 seconds. There are a few caveats to the engine, however, like the gears running a bit short, but this is a car that shines at higher RPMs.

Driving the 2017 BMW M2 feels like you’re sitting in a glove. The seats are fantastic. They can be tweaked to fit anyone’s size and shape, and there is plenty of headroom up front.

So, maybe the M2 cheats a bit in this regard. Many modern performance cars will send intake noise directly into the cabin via the car’s speakers. Some cars synthesize the noise, others don’t. This one doesn’t. Even when the fuse connecting the entertainment system is pulled - something that will effectively kill the intake noise being directed into the cabin - the car still sounds like an absolute beast.

It’s true that the M2 does offer a full backseat, but there isn’t enough room for anyone but kids to fit back there, so forget any plans of hauling friends or co-workers off to lunch. It’s great if you’re sitting up front, but more headspace in the backseat would go a long way to making the car a better fit as a daily driver.

The best way to describe the ride in the M2 is raw. Unlike its competitors, the M2 doesn’t feature adaptive suspension. The ride in the M2 feels still no matter which drive mode the car is in.

The gears in the M2 are short. Cruising at interstate speeds leaves the car groaning at a relatively high RPM. This creates excess cabin noise in these situations and means fuel economy suffers as a result.

4. Having Fun Means Turning Off ESC

Oddly enough, turning off the automatic rev-matching on the manual M2 also shuts off electronic stability control. If you’re skillful enough to swing the car around the track, you have to also turn off a government mandated safety feature to do so.

As of right now, the BMW M2 really doesn’t have much in the way of a true competitor. The Audi S3 can nearly match the 2017 BMW M2’s performance in a straight line but isn’t as fun to drive around a track thanks to the M2 being rear-wheel-drive, and you can gear a nearly feature complete M2 for cheaper than the S3.

The Mercedes CLA AMG45 is another contender that is on equal ground, performance-wise, with the M2. Both cars are fast but again the AMG is another all-wheel drive while also being heavier.

The 2017 BMW M2 brings the old M3 back with modern tech. It’s a car that performs superbly and doesn’t break the bank getting you there.