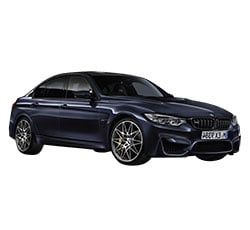 Should You Buy a 2017 BMW M3? Here Are Some Reasons For and Against

The BMW M3 is legendary among car enthusiasts. It debuted in 1986 and essentially created the “sports sedan.” During the 31 years, the car has been in production, it has maintained its status as a market leader, cleverly hiding its tempest performance under its business-friendly design. The 2017 BMW M3 proudly carries this tradition, offering an engine that produces 425-hp with 406 lb-ft of torque and offering an attractive Competition package that gives the car an additional 19-hp.

The 2017 BMW M3 comes with a host of new features, but one of the biggest “upgrades” puts BMW’s adaptive M suspension standard in every trim. The iDrive has been updated to 5.0, which adds a higher-resolution screen and a more modern user interface. The Executive package now includes enhanced USB and Bluetooth, wireless charging, and Wi-Fi hotspot functionality. And for an extra luxurious touch, the Merino leather option has been expanded to now include the dashboard.

1. It's a sedan with no compromise

Performance cars at this level tend to come with some compromises in the space department, but that’s not the case with the 2017 BMW M3. It’s a four-door sedan that can comfortably fit extra passengers or luggage while still managing to feel like you’re driving a coup. Even at 3,600 pounds, it more than keeps up with its two-door brethren.

It was said above but bears mentioning again, the 2017 BMW M3 packs a twin-turbo 3.0-liter inline-six engine that puts out 425-hp and 406 lb-ft of torque. With the standard six-speed manual, it gets to 60 mph in 4 seconds. With the automatic, it makes it in 3.8 seconds. That’s faster than both the Porsche Carrera and the Porsche Panamera.

Speaking of competition, the 2017 BMW M3 has a base MSRP of $64,000. With options, the M3 can get pricey, but the Competition package ($4,750) is the only must-have. But to put things into perspective, the Porsche Panamera Turbo is a whopping $146,900. Another competitor, the Cadillac CTS-V, produces an impressive 640-hp but only just manages to keep up with the M3. And with a base MSRP of $85,995, it fails to live up to the M3’s interior design or its handling.

The Competition package is a newer package that adds 19-hp, a shadow trim, and 20-inch forged wheels. This is an optional package that really brings the car to life and it’s the way the car should come out of the factory.

Weight is a serious concern when designing a performance car. Getting a car as light as possible means sometimes cutting a few corners on some of the car’s luxury features. The 2017 BMW M3 gives drivers the best of both worlds, offering high-end luxury features like ceramic brakes, Merino leather, and other great options.

Driving the 2017 BMW M3 is a completely sublime experience. It’s variable and dynamic. The steering, damping, throttle and stability can all be changed in the settings, and BMW’s adaptive M suspension never misses a beat.

It’s not often that a car is praised for its lack of options but the 2017 BMW M3 offers just the right amount. It’s not bogged down with too many frivolous features and it’s not missing anything important. The iDrive system has been revamped here and sits on an attractive minimal dashboard. The optional Executive package comes with all of the tech features you’d want, like Wi-Fi hotspot, wireless charging and the like.

Turbo lag can be unpredictable in many cars, and one of the worst situations you can be in is pulling out into traffic, expecting the kick, but getting nothing. The 2017 BMW M3’s twin-turbo is excellent in this regard because it produces little to no lag in virtually every scenario.

The 2017 BMW M3 has a somewhat understated design. It looks remarkably similar to its non-M badged relatives, but it has plenty of subtle cues to let others know what’s under the hood. It features quad tail pipes and a chrome sports exhaust. The Competition package upgrades the wheels to 20-inch forged wheels. The design is simple but effective.

In a car like this, even though the automatic transmission is technically a hair faster, driving manual is the only way to go. With so many other manufacturers beginning to prefer an auto over manual, it’s nice to see BMW tipping their hats to drivers by offering the six-speed manual as standard.

For performance-minded buyers, the BMW M2 offers almost everything the M3 does and can be had nearly fully loaded for $51,700. Don’t need all the luxury features or a full-sized sedan? The BMW M2 has all you could want.

While the base M3 seems like a bargain, the optional upgrades are pricey. That must-have Competition package is $4,750 and if you want a rearview camera and modern tech features then you’ll have to drop an extra $3,900. After all is said and done, a full loaded 2017 BMW M3 costs over $90,000.

4. How It Stacks up to the Competition

When it comes to best value, the BMW M3 just can’t be beaten. Some of the competition, such as the Cadillac CTS-V place performance over luxury where the BMW M3 strikes a near-perfect balance between the two. Other cars that manage to strike that balance are more expensive, such as the aforementioned Porsches.

For 2017 the BMW M3 still reigns at the top of the sports sedan market. The value and performance it brings to this particular segment are hard to beat.