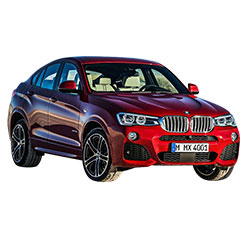 Should You Buy a 2017 BMW X4? Here Are Some Reasons For and Against

A luxury SUV with packed with quality, the 2017 BMW X4 is a top choice in a market segment crowded with worthy competitors. It delivers strong performance along with great design and styling. Potential buyers can look to a number of great features in the 2017 X4, though some might find a few drawbacks as well.

It is a new year for automobiles, and the X4 has been given some great new features for 2017. A Wi-Fi hotspot and wireless phone charging capabilities are optional on the X4, and its already great iDrive infotainment system has received an upgrade. Last year’s top X4 sub-model, the xDrive35i, has been replaced with the new and even better M40i.

The 2017 BMW X4 is a tall, stable luxury crossover SUV that is easy to drive. Its high standing height and wide windshield offer drivers a great, unobstructed view of the road, and its forgiving suspension rides smoothly over bumpy roads. The X4 is a vehicle that drivers will love to take to and from work, while at the same time can handle long highway drives with ease.

The 2017 BMW X4 large and elegant interior is one of its best features. The standard seats are soft and comfortable, and the optional M Sport seats are even better. Materials from front to back are of the highest quality, both in looks and engineering. The rear seats are a bit on the small side, but still comfortable for passengers when taking short or medium length drives.

There are a number of great options available for the 2017 X4, both by themselves and as part of option packages. Standard features abound, from adaptive xenon headlights and 18-inch alloy wheels to dual-zone climate controls and Blue connectivity. A Premium Package adds luxury features, the M Sport package adds performance features, and the Driver Assistance and sensors and other safety features. Drivers can choose the options packages that are right for them, allowing them to fit the X4 to their own preferences.

The majority of the X4’s high-tech features are built around BMW’s iDrive system. The center-console-mounted touchscreen takes a little while to master, but the effort is worth it. Once the learning process is complete, drivers can quickly and effortlessly make climate, connectivity and entertainment adjustments can be made all from one touchscreen.

The 2017 BMW X4 comes in two sub-models: the xDrive28i and the M40i. Each of these two sub-models is defined by their engine. The xDrive28i comes equipped with a turbocharged 2.0-l, 4-cylinder that puts out a respectable 240 horsepower and 260 pound-feet of torque. The all-new M40i has an exciting inline-six engine, sized at 3.0-liters and fitted with a turbocharger of its own. With this larger engine, the M40i X4 shoots from 0-60 mph in only 4.7 seconds, which beats most of the other vehicles in its class by a wide margin. Both engines are attached to BMW’s xDrive adjustable all-wheel-drive transmission.

Both of the 2017 BMW X4’s two engines are not only strong, but they are also efficient. The 2.0-liter engine gets a combined 23 miles per gallon fuel economy, and the more vigorous 3.0-liter still get a respectable 21 combined miles per gallon. The X4 combines power and fuel-efficiency better than nearly every crossover SUV on the market and beats larger SUVs by a large amount.

The 2017 X4’s strong, sporty suspension handles corners with ease, and its steering it strong and responsive. Three variable suspension modes—green, comfort, and sport—so drivers can select that best balance of comfort and responsiveness needed at any given moment.

The 2017 X4 handles well on and off-road, and with its multiple suspension options and adjustable power-transferring transmission, can be dialed into countless varieties of performance and drivability. The amount of storage space is a little on the small side, but the X4 is a crossover SUV that is at home on vacations, long-distance trips, and daily driving.

The 2017 BMW X4 comes with strong safety features right from the base model, from traction and stability control to active head restraints and full-length side curtain airbags. An optional Driver Assistance Plus package makes the X4 even safer, and it includes high-tech features like parking sensors, lane departure warnings, and a rearview camera.

A new addition for the 2017 model year, the M40i sub-model is the most exciting and high-performing X4 yet. It comes not only with the larger and more power engine detailed above, but also includes such sport features as 20-inch alloy wheels and a performance exhaust. The M40i is a thrill to drive and makes the X4 feel more like a sports car than a crossover SUV.

The X4 is on the small side for an SUV, even for a crossover SUV. Its rear storage space is smaller than many of its competitors, though it should be noted that the X4’s rear hatch does all easy access the rear cargo space.

The iDrive infotainment system is robust and comprehensive in its controls. Unfortunately, that wealth of features means that it takes a bit of time to master it fully. Impatient drivers might become frustrated until they grow accustomed to its full functionality.

The 2017 BMW X4 is one of the best performing vehicles in its class. In its M40i configuration, it is far faster than other luxury crossover SUVs like the Range Rover Evoque and Lincoln MKC, though it does give up a bit of utility and storage space in the exchange. The Porsche Macan is even faster than the X4, but it also carries a higher price tag.

The 2017 BMW X4 has a unique position in the luxury crossover market. It combines excellent performance with BMW style, but it is also a bit on the small side when it comes to storage space. Ultimately, for consumers that love to drive and want a crossover that can keep up, the 2017 BMW X4 is a great choice.