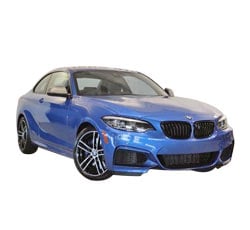 Should You Buy a 2019 BMW 2-Series? Here Are Some Reasons For and Against

BMW has always been known for producing vehicles that appeal to driving enthusiasts. Available as either a coupe or convertible, the 2019 BMW 2-Series is another one of the automaker's fun cars. You will enjoy its snappy performance and comfortable driving position. An attractive starting price gives you another reason to drive home a BMW 2-Series. It's a great alternative to a pure sports car. Does the new 2-Series stand out from the competition?

Not many changes were made to the 2019 BMW 2-Series. Its styling and available powertrains remain the same. However, BMW did update the new 2-Series my adding a greater number of standard safety features.

1. Base 2-Series Engine Delivers the Performance

Unlike some base models, the entry-level 2-Series is a blast to drive. It comes equipped with BMW's popular TwinPower Turbo four-cylinder engine. BMW rates it to produce 248 horsepower and 258 pound-feet of torque. This engine actually feels even more potent in the real world. When accelerating from a dead stop, the 2-Series can sprint to 60 mph in around 5.5 seconds.

If you want to kick your adrenaline glands into high gear, step up to the stronger M240i model. It's powered by a 3.0-liter, turbocharged six-cylinder engine. When you step on the gas, you'll will quickly feel the extra kick under the hood. This high-performance engine is tuned to develop more than 330 horsepower, which can be felt even at low speeds. The car's swift acceleration is bound to get your heart pumping. Testers have clocked the M240i with a 0-60 time of 4.5 seconds.

The standard eight-speed automatic transmission is an exceptionally smooth performer. It does a great job of helping put the available power to the pavement. When accelerating on the highway, you'll enjoy how seamlessly the transmission shifts from one gear to the next. Available as a no-cost option, the six-speed manual transmission is even more exciting. Driving purists will love digging into the gears.

Although the 2019 BMW 2-Series may not be a full-fledged sports car, it handles like one. Whether you're quickly changing lanes or darting around curves, expect the new 2-Series to inspire a great deal of confidence. Very few cars in this price range feel as balanced. The higher trims levels come standard with an adaptive suspension, which further enhances the car's sporty road manners. You can also improve grip by opting for a set of summer performance tires.

The rear-wheel-drive 2019 BMW 2 Series is unbelievably fun to toss around. However, it doesn't get the job done during wintry conditions. Drivers who live in a snow-prone area of the country should opt for BMW's xDrive AWD system. It's among the smartest AWD systems on the market. BMW designed the system with a multi-disc clutch, which helps it to adapt to the varying road conditions. Fortunately, opting for all-wheel drive doesn't result in a big decrease in fuel economy.

A lot of drivers will like this car's athletic appearance. Some people may describe it as a miniature muscle car. Everyone on the road will notice its short trunk and powerfully built body. The 2019 BMW 2-Series also sits low to the ground, which attenuates its athletic stance. LED lighting comes standard. Boasting a rear spoiler and a larger set of 18-inch wheels, the 240i model has an especially sleek look. Some of the cool exterior colors include Sunset Orange, Melbourne Red, and Seaside Blue.

With a starting price just above $35,000, the 2019 BMW 2-Series proves to be a good value. It's currently BMW's least expensive automobile. Some of the today's other sport coupes don't pack as much performance for the dollar. Sticking with the base 230i model also doesn't force you to sacrifice many features. Some of the standard goodies include a 6.5-inch infotainment screen, a backup camera, and Bluetooth integration.

This year, BMW decided to equip the 2-Series with a greater number of standard driving aids. While automatic emergency braking can prevent you from crashing into the back of another vehicle, lane departure warning gives you more awareness on the highway. Parking sensors are also found on every 2019 BMW 2-Series. Solid crash scores from the IIHS further highlight the 2-Series as a safe ride.

This fun coupe is perfect for the purpose of daily commuting. Although you will need to burn premium unleaded fuel, the 2019 BMW 2-Series is good on gas. Models equipped with a four-cylinder engine can return up to 35 mpg. Meanwhile, six-cylinder models fitted with an automatic transmission top out at 30 mpg.

A short wheelbase enables the 2019 BMW 2-Series to easily fit into tight parking spots. However, BMW's Parking Assistant will make this task even less nerve-racking. It's especially helpful for the drivers who live or work in a busy city.

Front-seat comfort in the 2019 BMW 2-Series is impressive. Unfortunately, it does suffer from a tiny backseat. This could be an issue for the drivers who need to chauffer around their kids on an everyday basis. A two-door design also limits this coupe's practicality. If you have a family, consider a compact luxury sedan such as the Audi A3 and the Acura ILX.

2. Options Cause Price to Climb

Adding optional equipment to the new 2-Series will cause its price to climb. A loaded M240i can cost nearly $50,000. This makes it almost as expensive as a new Chevrolet Corvette. Some of the available options include a Wi-Fi hot spot, a high-powered Harman Kardon sound system, and wireless device charging.

3. iDrive Infotainment System Takes a While to Learn

BMW's iDrive infotainment system works well. Clear graphics and quick information processing make this interface a pleasure to use. Nevertheless, it'll take a while for some drivers to learn the ropes. Newbies to the world of modern car technology may desire a simpler interface.

The new 2-Series does not come equipped with a teen driver monitoring system. Chevy's Teen Driver system allows parents to set a speed limit and keep track of their child's driving habits. Parents would enjoy having a similar technology in the BMW 2-Series.

Drivers will appreciate this car's good fuel economy. Nevertheless, BMW tuned both of the available engines to operate on premium unleaded gas. Some drivers won't like spending the extra money on high octane fuel.

Some people will also be cross-shopping the 2019 BMW 2-Series with the 2019 Audi TT. Although the Audi TT is a very strong performer, it's noticeably more expensive. There's also less cargo space in the back. If you're thinking about getting the convertible 2-Series, check out the 2019 Mazda MX-5 Miata as well. While the MX-5 Miata may not be as powerful as the BMW 2 Series, it's cheaper and just as fun to drive. Some drivers may also prefer the MX-5 Miata's exclusive styling. On the downside, you can't get the MX-5 Miata roadster with a all-wheel drive.

For the price, the 2019 BMW 2-Series is hard to beat. You'll be able to experience driving excitement without spending big bucks. It's efficient, powerful, and comfortable enough to be your daily-driver. Drivers seeking the optimum handling should consider getting the available Track package. Because the 2-Series is easy to park, it remains a good choice for drivers living in a metropolitan area. Despite this car's great attributes, some drivers will need a roomier backseat. If you desire certain options, prepare to fork over extra money.

Save Money on a 2019 BMW 2-Series:
Find New Car Clearance Prices - Many Vehicles are Selling Below Dealer Invoice Prices.

Every dealer offers a secret price. Many prices are below invoice. Find yours here.
2019 BMW Buying Guides: