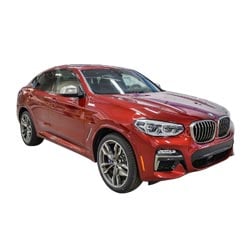 Should You Buy a 2019 BMW X4? Here Are Some Reasons For and Against

Since its unveiling in 2014, the BMW X4 has seen annual worldwide sales in the 50,000 range. The first generation of the X4 had a lot of good things going for it, but the 2019 BMW X4 is kick-starting the second generation with quite a bang. There are plenty of new standardized features to be found, and the vehicle has a revitalized style that makes it look more upscale and high-tech than ever before. Of course, since this is a subcompact luxury SUV, you can expect rear seat and cargo space to be limited and for additional packages and options to be a bit pricey. Still, given how easy this vehicle is to customize, it can be made to fit stricter budgets.

Since this model year marks the entrance into the vehicle's second generation, many things are new on the 2019 BMW X4. Updates have been made inside and out in order to make the vehicle stand out. On the exterior, the rear fascia now features L-shaped taillights and takes on a curvier, more athletic look. On the inside, you will find a plethora of newly standardized technology, including a massive 10.3-inch touchscreen display. Also, cargo space is up by one cubic foot from the 2018 line-up, and there is an extra inch of leg room in the rear seat.

Regardless of whichever trim level you decide to buy, the 2019 BMW X4 offers strong engines. The base trim (the xDrive30i) comes with a 2.0-L 4-cylinder engine that is capable of generating 248 hp and 258 lb-ft of torque. Meanwhile, the line-topping xDriveM40i is equipped with a 3.0-L 6-cylinder turbocharged engine that gets a solid 355 hp and 365 lb-ft of torque. Both engines get paired up with an 8-speed automatic transmission, and all-wheel drive comes standard. Both of these engines are more than sufficient for powering the X4 and providing a smooth driving performance.

BMW upped the ante on features this year and has made quite a few of them standard on the new X4. Some of the external features include a sunroof, LED headlights, parking sensors for the front and rear of the vehicle, and a power liftgate. On the inside of the X4, you get standard simulated leather upholstery, a 12-speaker audio system, the BMW Assist emergency telematics system, and forward collision warning with auotmatic braking at lower speeds. It should be noted that quite a few of the X4's competitors do not wrap some of these features into their standard lists and instead make them parts of packages.

Subcompact SUVs are not exactly known for having the best handling capabilities, but the 2019 BMW X4 feels more refined than quite a few of its competitors. Handling has an unparalleled sharpness to it, and there is significantly less body roll to the second generation of X4s than what drivers felt on the first. Overall, handling feels secure and should inspire confidence in the driver.

Both engine choices offer rapid acceleration. While the previous generation had the ability to get from 0 to 60 mph in roughly 6 seconds, you can expect even quicker acceleration speeds from the second generation of X4 models since the engines provide so much power in such a fluid fashion. The M40i is especially exciting with its sporty performance, and taking it up to speed on the highway should prove to be quite thrilling for performance-minded drivers.

BMW is renowned for their emphasis on comfortable cabin arrangements, but the sport seats up front are not to be easily outdone by competitors. While many sport seats tend to border on the firmer side of things, the seats in the 2019 BMW X4 are surprisingly plush, adjust a number of different ways, and provide ample lateral and lumbar support. Seating in the rear is comfortable too despite the limited head room that is back there.

Another thing that BMW is well-known for is its use of high-quality interior materials and reliance on fine craftsmanship. The leather upholstery that comes in either trim level is gorgeous, and the stitching throughout is impeccable. There are plenty of soft-touch surfaces to be found, so nothing looks tacky or out-of-place in this luxury vehicle. There are no noticeable gaps between panels, and you will not hear anything rattling or rolling inside of the cabin.

7. Controls Are Easy to Use

The 2019 BMW X4 is a remarkably user-friendly luxury SUV. Controls are intuitively laid out along the dash and even within the iDrive infotainment system. Everything seems to be within a fingertip's reach for the driver, and the controls should not take very much time to learn and grow accustomed to. Non-tech savvy drivers will likely appreciate the work that BMW has put into refining iDrive, as it seems to be getting better every year.

iDrive really deserves its own emphasis in this review for the fact that it has matured into a user-friendly system this model year. iDrive allows you to connect with Google Assistant, Alexa, and Amazon Echo. Voice command functions are now easier to use and seem to be fairly responsive. In a sea of difficult-to-use infotainment systems, it is refreshing to see BMW working on making theirs better for consumers.

If you decide to invest in the M40i, you can get the added benefit of several key features that are wrapped into the M Sport package. Equipping the M Sport package on the X4 gives you a chic black exterior paint job, specially-tuned M Sport brakes, and a more aerodynamic exterior styling, a unique exhaust system, and 19-inch double-spoke wheels. Those who have the funds available to add this package and want to drive a vehicle that really stands out should consider equipping it, even just for the brakes alone.

1. Options and Packages Get Expensive

As is the case with most luxury vehicles, the 2019 BMW X4 can get expensive with the more optional features and packages that get added on. The X4 can quickly go from a $50,000 vehicle into an $80,000 one. Buyers who are on a budget will need to carefully pre-plan what they really want and need when customizing their X4, as many of the options will be extremely hard to resist.

A common issue for subcompact luxury SUVs like the BMW X4 is that head space is limited in the rear. The sloping roof-line that BMW has sculpted on the vehicle means that passengers who are over six feet tall will have to duck their heads down and try to find ways to make themselves more comfortable.

Since the roof-line on the 2019 BMW X4 has such a steep downward slope to it, cargo space is also limited, although it has improved by almost a cubic foot over the first generation. The 2019 model only offers 18.5 cubic feet of cargo space with all seats in place. When the rear seats are folded down, the amount of available cargo space maxes out to 50.5 cubic feet. Trying to fit bulky items in the cargo area is rather difficult, so those who need the extra space might need to reconsider their options.

4. Android Auto Is Not Available and Apple CarPlay is Subscription-based

While there are plenty of desirable technological features to be found on the new BMW X4, smartphone app integration is seriously lacking. Apple CarPlay is only available with a subscription, and Android Auto is, for whatever reason, not even an option. This might alienate some drivers who want to use their smartphone apps versus the built-in functions in iDrive. Additionally, many other vehicles on the market this year are now offering both Apple CarPlay and Android Auto as standard features.

The 2019 BMW X4 faces stiff competition from the 2019 Porsche Macan. Since its inception, the Macan has rapidly become a popular seller. This year's line-up has received a mid-cycle refresh that includes a re-stylized rear fascia, upgraded technological features, and a cool new paint color. The vehicle provides rapid acceleration no matter which engine you opt for, and the ride quality is incredibly well-mannered. However, the Macan also suffers from a lack of rear seat and cargo space. It also gets expensive the more features you add on.

Another top contender for the model year is the 2019 Jaguar F-Pace. The F-Pace lacks some of the high-quality interior materials found in the X4, but it has exponentially more cargo space available. Also, there is a diesel engine option that can help drivers save at the pump by getting an impressive combined 29 mpg.

The BMW X4 enters into its second generation with a lot of promise. It is hard to deny that the 2019 BMW X4 has a lot of good things going for it and really is suffering from setbacks common to its segment. BMW is showing signs of trying to improve upon these drawbacks with the improvements it has made on the X4 this year.

Save Money on a 2019 BMW X4:
Find New Car Clearance Prices - Many Vehicles are Selling Below Dealer Invoice Prices.

Every dealer offers a secret price. Many prices are below invoice. Find yours here.
2019 BMW Buying Guides: