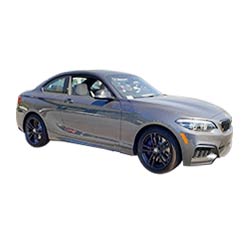 What 2020 BMW 2-Series Trim Level Should you Buy? What is the Difference Between Trims?

Since they launched their first U.S. dealership in 1975, BMW has been a leader in the design of high-performance luxury vehicles. Shopping for an automobile from this German company is a different experience. Seeing the emblem notifies the consumer they're going on an adventure instead of simply window shopping.

Everything is available on these vehicles to make the future driver comfortable. For instance, hand-crafted engineering, audio and safety technology, and a steel frame that withstands the worst collisions. One of these vehicles is highlighted here -- the BMW 2 Series.

Introduced in 2014, the two-door coupe is economical for BMW standards. The current model year has a few tweaks to existing features after a duo of past design changes. They can be seen on the model's quartet of trims.

The following guide displays the main differences among the BMW 2 Series trims. In the end, consumers should have a base understanding on what configuration is right for them.

Why the need for all-wheel capability on a coupe when there's no chance of it going off-road? traction control is the main reason. All-wheel-drive dristributes equal power to every wheel. In turn, it has a firmer grip on the road, and this can help on slick surfaces and when the BMW 2 Series h

Aside from the drivetrain, the performance features are similar on the two trims. The engine is a BMW-designed twin turbo. It has four-cylinders and 2.0L volume that produces 255 horsepower. It also has variable valve timing (VVT) control that's a combination of double-VANOS and Valvetronic. VVT opens and closes the valves properly to maintain peak performance.

The eight-speed automatic transmission shifts into manual gears via paddles mounted on the steering wheel. Electronically controlled engine cooling minimizes the risk of overheating. Then there is Driving Dynamics Control (DDC). It gives the driver to switch to various modes per the driving environment.

Both trims offer a Dynamic Stability Control (DSC) package. It ensures a smooth ride with a start-off assistant to prevent the coupe from sliding backwards while stopped on an incline. It also comes with a brake stand-by technology that moves the pads closer to the discs when it senses the driver is going to stop.

A double-pivot-type mechanism with spring struts is part of the front-end suspension. They're installed firm but can be flexible when needed. Rear suspension is comprised of a five-link configuration with cast-aluminum upper transverse arms. Hard impacts are minimized with twin-tube gas-pressure shock absorbers.

There are no differences in the two trims when hit comes to exterior features. One of the similarities is heated power-folding side-view mirrors. Another is headlights and foglights powered by LED bulbs. These produce a cleaner while while remaining energy efficienct.

Movement is provided by 17" double-spoke bi-colored wheels. They're paired with all-season tires. These run flat so the coupe can get to a safe area. In turn, the driver is able to contact someone for service.

There are no differences in these trims, but there are plenty of similarities. The most important for many customers is seat comfort. Both rows are upholstered in SensaTec -- BMW's version of leatherette.

The driver and front passenger have the option to adjust the seats 10-ways. They can move the side bolsters, headrests, and thigh support. These items are saved in a memory recall to retrieve by different first row passengers.

Climate control is separated into three zones for the driver, passenger, and rear occupants to set their own comfort levels. Within this setup is a micro-filter system that purifies the air of bacteria and removes odors. Other climate features are automatic air recirculation, windshield misting sensor, and, like the front-row seats, memory recall.

Both of these trims also have a dual-pane glass moonroof, an auto-dimming rear-view mirror, and a rearseat armrest with cupholders for second row passengers.

Luckily, there aren't any differences between these trims. Thus, consumers have one less thing to worry about.

Among the standards is a touchscreen display with a BMW Navigation system package. This technology provides real-time traffic reports and deatils on alternate routes via three-dimensional color maps. The hard drive within the touchscreen is equipped with 20 GB of storage for audio files. A voice recognition system with natural language understanding grants hands-free operations of all these tasks.

The display and other audio technology features are compatible with Bluetooth and Apple CarPlay. The latter imports the driver's iPhone apps to the touchscreen. As a result, they can utilize them for further navigation and music streaming.

The audio system on these trims has 205-watt amplifier as a central component. Its seven speakers are installed in the door panels, dashboard, and under the front seats. The unit is pre-wired to utilize a subscription to Sirius XM radio.

There are several standards built into the 230i trims of the 2020 BMW 2 Series. Basics include anti-lock braking and a rear-view camera that diplays oncoming cars and pedestrians, The airbagas have built-in sensors to detect the weight and location of occupants before they deploy. The standard BMW Assist eCall tool offers an Emergency Request button and automatic notification to police and EMTs in the event of a collision.

To help the driver maintain visibility when they enter a bad patch of weather, the windshield wipers detect precipitation. When this happens, they automatically start.
An added security options is BMW Remote Services. If the driver is unable to open their vehicle doors for some reason, an automatic unlock command can be utilized via a phone call or with a mobile app. In addition, these remote services have the power to track the stolen vehicle for a quick recovery.

Instead of a three-year/36,000 mile plan, BMW 2 Series owners get get an extended four-year, 50,000 mile program. Under rust protection, drivers get 12 years of unlimited shielding instead of the industry's standard ten years. Furthermore, drivers have four years of roadside assistance without a mileage limit.

In the end, there's only a few thousand dollars difference between the 230i and 230i xDrive, so go with the latter trim.

The M on the M240i signifies this as the sports trim for the M240i. This means some differences between it and the 230i xDrive. One of these being it goes back to a rear-wheel-drive vehicle. Another is a 3.0L V6 powertrain that generates 335 horsepower.

M Sport Brakes and adaptive suspension are the upgraded handling standards in the M240i. The latter has an onboard system that controls the wheels vertical movement relative to the vehicle.

As to the sport brakes, they are different than standard models with a floating caliper and one large piston. Instead, they have fixed calipers with four pistons in the front and two in the rear.

Besides the engine and the brackes, there are some other external differences in the M240i. The wheel circumference is increased to 18 inches while an aerodynamic kit is added. This kit allows the BMW 2 Series to cut through the normal environmental conditions for a smoother ride and increased fuel efficiency.

There's an added safety package in the M240i -- the Active Driving Assistant. Within this package are driver support aids like daytime protections to avoid pedestrian accidents and forward collision warning with mitigation for city collisions. Its lane departure warning automatically moves the vehicle back into position when sensors detect it veering away.

In general, the inclusion of these other standards might not draw in consumers to the M240i because of its rear-wheel capacity. Therefore, for its value, consumers should stick with the 230i xDrive trim.

The only difference is the drivetrain. The M240i xDrive is equipped with all-wheel-drive. The rest of the features between the two trims is identical. In the end, the best trim to go with is the M240i xDrive.

Overall, the M230i xDrive that should be given a more detailed look. Yes, its M240i cousin has a more powerful engine and a built-in sports package that helps it maintain better control on the road. Yet, those don't merit the increased MSRP between the two trims.

It comes down to return on investment. Should the consumer use the M240i xDrive for normal driving routines, the extra horsepower will do them no good on city streets or stop-and-go highway traffic. Actually, the powertrain, and M Sport suspension and brakes might never be utilized to their fullest capacity.

On the other hand, even without the heftier suspension and refined brakes, the 230i xDrive can do most of the same things, and for a lower price. If the M240i xDrive had more enhancements to its exterior and interior features, this might be different. For instance, an upgrade to a Harmon Kardon audio system or 1-year subscription to Sirius XM. Without these items, the two trims are almost the same vehicle.

Nevertheless, the guide's decsion on the 2020 BMW 2 Series 230i xDrive is simply opinion. Now that consumers have a better idea of what the two-door coupe can offer them, the next step is to see one in person.

Searching the BMW website is a good starting point. However, the best way is to visit a local BMW dealership will move consumers forward.

While there, they can physically review the interior and exterior of all trims. They can also speak with BMW sales representatives to get answers to questions this guide didn't provide.

The most important reason to visit the BMW dealer is to sit in the 230i xDrive and take a test drive. It's here they'll truly understand what the 2 Series is all about. By taking it through its paces, via dealer limits, the consumer will get the feel of its performance, how it handles curves, and what it does during acceleration.

Only at that point can the consumer determine if the 230i xDrive is right for them or if they need to go elsewhere for a new coupe.
Did you find this article useful?
Please rate this page. Select a star rating from 1 to 5 below:

Save Money on a 2020 BMW 2-Series:
Find New Car Clearance Prices - Many Vehicles are Selling Below Dealer Invoice Prices.