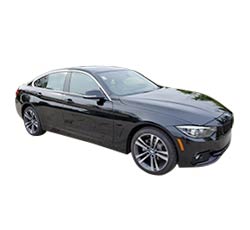 What 2020 BMW 4-Series Trim Level Should you Buy? What is the Difference Between Trims?

The BMW 4-Series is sporty and exciting to drive. There are several trims to choose from, so people can decide on which type of engine they'd like as well as what kind of vehicle they want. There are both two- and four-door coupes available, and there are a few convertibles available. The M4 is the more powerful version of the 4-Series, and it comes as a coupe or convertible.

xDrive, BMW's intelligent all-wheel drive system, is available on any of these trims, with the exception of the M4 models. When driving in normal conditions, power is sent to both the rear and front axles at a 60 to 40 ratio. If the vehicle detects any change in the road conditions, either because of ice or snow or because of a difference in terrain, then it can automatically respond to optimize traction. Since the vehicle decides when and how to adjust power distribution, the driver can concentrate on other things while appreciating the improved handling and stability.

Both trims pair their engines with a Sport Automatic transmission. People can either let the transmission do all the work, shifting between the eight speeds as necessary, or they can use Sport and Manual shift modes whenever they want to be more in control. Other components that help the BMW 4-Series Coupe feel agile are a five-link rear suspension, premium gas-pressure shock absorbers with a twin tube design, and high-performance ventilated disc brakes. Taking corners shouldn't be an issue, as the 4-Series Coupes have Dynamic Brake Control and Cornering Brake Control, allowing them to make necessary adjustments to enhance stability.

These two cars look the same from an exterior standpoint, with 18-inch, double-spoke wheels and a matte chrome trim. LED headlights and LED fog lights help with visibility, and it can be nice to have heated side mirrors that can fold in with the touch of a button.

Most of the interior features are the same across these BMW 4-Series Coupes. The seats have SensaTec upholstery, which is a synthetic material that looks and feels almost like leather and is easy to clean. The front sport seats can be adjusted in 10 ways, and with a memory function on the driver's seat and side mirrors, things can slide into place in a few seconds.

One upgrade that the 440i has is Comfort Access keyless entry. It comes with a remote control and a hands-free trunk. This can make loading the trunk more convenient when anyone has his or her hands full.

The 440i has a few more enhancements in its cabin in comparison to the 430i. First, its sport steering wheel is wrapped with Nappa leather instead of standard leather. It's the only trim out of these two models to have SiriusXM Satellite Radio technology already installed. It also has a Harman Kardon surround sound system. This system comes with a 600-watt amplifier and 16 speakers that cover the whole range of sound. In contrast, the 430i has a Hi-Fi sound system with a 205-watt amplifier and nine total speakers.

When comparing the Gran Coupe to the Coupe, the most obvious difference is that the Gran Coupe has four doors. It's still sporty and sleek like the Coupe, but it has a slightly larger back seat. Interestingly, the leg room is actually the same in these two trims; the Gran Coupe has a bit more shoulder and head room in the second row, which some larger passengers might appreciate.

Looking at the engines that power these two models, there's nothing that will surprise anyone familiar with the BMW 4-Series. The 430i Gran Coupe runs on the same engine as the 430i Coupe, so it has the same capability except for the fact that the Gran Coupe is 0.1 seconds slower in accelerating from zero to 60 miles per hour.

Choosing amongst these two trims really depends on whether people want two or four doors and what type of engine they prefer. In general, four doors can be more ideal if passengers are often riding in the back seat, as they won't have to wait for people in the front to get up before they can access their seats. The two-door model seems more aerodynamic, and it can be fine if passengers don't mind climbing into the back seat.

In terms of safety, the 430i Gran Coupe and 440i Gran Coupe are built the same way. They have a head protection system, numerous airbags placed throughout the cabin, and the ability to call for emergency assistance in the event of an accident.

With BMW Remote Services, drivers can pinpoint their BMW's exact location with their smartphones, and they can remotely lock/unlock their doors and check on certain vehicle performance factors. Like the 4-Series Coupe, the Gran Coupe has built-in navigation, giving people turn-by-turn directions when they're trying to find their way to unfamiliar locations.

By offering a convertible version of the 4-Series, BMW has made a move to attract those people who love feeling the wind in their hair as they cruise down the road. The convertible has two doors, so it's more similar to the Coupe than the Gran Coupe.

It takes only 20 seconds to fold down the roof, and all people have to do is sit back and let the car handle its conversion on its own. Expect to pay extra for the novelty of driving a convertible. The 430i Convertible is more expensive than the 430i Gran Coupe, even though it has the standard engine with 248 horsepower.

The two trims have similar safety systems, all of which are present in the other models in the line-up. With active blind spot detection, the BMW can alert drivers to other vehicles in those hard-to-see locations on either side of the vehicle. The sensors can also send out warnings if other drivers rapidly approach the BMW from behind. The other safety components are part of the Active Driving Assistant package. It includes a warning system that will alert people to potential frontal collisions as well as a lane departure warning function. In addition, the BMW can read traffic signs and gently remind drivers about the speed limit.

These two models differ in that the 440i Convertible is powered by the 3.0-liter engine that some of the other 4-Series vehicles have. With the 440i, it can be a fun experience to feel the engine really kicking into high gear while the cabin is completely opened up.

The 440i Convertible takes interior seating to a new level. Rather than SensaTec upholstery, it has seats covered in Dakota Leather. The leather even has sun-reflective technology so it can better withstand being out in the open.

Like the other models, the 4-Series Convertibles have 8.8-inch high-resolution screens with a solid amount of memory and 3D mapping technology. With voice commands, people can ask for directions, make calls, or change settings. The steering wheel, which is covered in Nappa leather on the 440i Convertible and leather on the 430i Convertible, has controls for audio, Bluetooth, and cruise control.

Jumping up to the M4 Coupe is a big move. The M4 has the same size engine as the 440i, but the M engine is considerably more powerful. It can generate 425 horsepower and 406 pound-feet of torque. Another important note is that the M4 Coupe can come with a six-speed manual transmission. This configuration is a performance-enthusiast's dream. An alternative option is to get a seven-speed double clutch transmission.

To support this more advanced engine, there are other mechanical components that have been upgraded in the M4. The M4 has a more advanced electric power steering system than that of the 440i Convertible, and it has a special differential and suspension. These enhancements all make sense, given that the car will have to work harder to stay in control with such a powerful engine keeping things moving.

The M4 Coupe can reach a top speed of 156 miles per hour, and this is much higher than the 130-mph top speed that the other BMW 4-Series can reach. Its fuel economy, which is around 20 (combined) miles per gallon, is slightly higher in the manual versus the automatic version.

With the M4 Coupe, drivers have a few more choices of exterior paint. The Sakhir Orange Metallic and Austin Yellow Metallic colors really stand out. Inside the cabin, the M4 Coupe has 14-way front seats instead of the 10-way front seats that are found in the other 4-Series models. The M4 has special accents that boost the sportiness of the car, and it has an adjustable seat width to make it easier for people to find the right fit.

Compare the 2020 BMW 4-Series M4 Coupe vs M4 Convertible. What is the difference?

The M4 Convertible represents some of the best that BMW has to offer, and it's clear that this a top-of-the-line 4-Series model from its hefty price tag. The M4 Convertible has the same engine and other supporting components as the Coupe has.

In the M4 Convertible, the premium seats are trimmed in Merino Leather. This is softer and more luxurious than the other leather seen in some other 4-Series trims. Even the door trim has been made with Merino Leather, and throughout the cabin, sun-reflective technology is used to keep the leather looking new, despite being exposed to the elements.

The Convertible version of the M4 actually has a slightly less powerful speaker system than the Coupe version. The M4 Coupe has a 16-speaker, Harman Kardon system, and the Convertible has a 12-speaker configuration.

Choosing a BMW 4-Series may take time, considering that there are so many models to consider. Some basic questions can help narrow down the options. Potential customers will have to think about whether they want two or four doors, a coupe or a convertible, and a standard or more powerful engine.

Since having a larger engine spices things up quite a bit, the recommendation would be to get a 4-Series that runs on the V6 engine. The 440i models are all fun to drive and handle themselves expertly, and since they can be equipped with xDrive, they can do well in a variety of situations. The Gran Coupe would make the most sense for those who frequently drive other passengers, and the Coupe and Convertible are both more youthful and sporty.

Of course, there's always the M4, which truly shines in performance and handling. It does come with a high price tag, though, so the M4 would only be recommended if people have a lot of extra money to spare.

Save Money on a 2020 BMW 4-Series:
Find New Car Clearance Prices - Many Vehicles are Selling Below Dealer Invoice Prices.