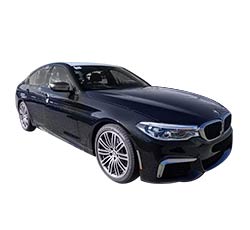 What 2020 BMW 5-Series Trim Level Should you Buy? What is the Difference Between Trims?

The 2020 BMW 5-Series is sophisticated and luxurious, and it offers plenty of interior space. It comes in multiple trims, some of which have all-wheel drive, so potential customers have some decisions to make. The base models are nicely equipped, and there are various engines available. The higher trims are more powerful and come with more high-end amenities.

Many people might be drawn to the 5-Series because of its size. It has nice leg room in the front and back, at 41.4 and 36.5 inches, respectively. This means that adults can comfortably fit in the second row.

The trunk is another area that shines. Though it's not flashy in any sense, the trunk has what it needs, which is space. Standard models of the BMW 5-Series have 18.7 cubic feet of storage room in their trunks, and the hybrid models have a little less room because of their battery packs. If one ever needs to accommodate larger items, the rear seats can be folded down. One, two, or all three seats can be quickly lowered, as the back seat comes as a 40/20/40 split-bench.

These two models are the starting trims in the line-up of the BMW 5-Series. They're similar in terms of interior and exterior features, and the primary difference is that the 530i xDrive comes with all-wheel drive instead of rear-wheel drive.

xDrive is the name of BMW's all-wheel-drive system. It can redistribute power between the front and rear axles so that traction is optimized. In normal circumstances, the rear axles get approximately 60% of the power, with the rest going to the front axles. If any slippage is ever detected, the system will immediately make the necessary adjustments to make sure power is being delivered to the wheels that can use it. Also, more power can be sent to the front axle whenever it seems like there is a situation of oversteering, and the opposite is true whenever it seems like the vehicle is understeering.

The 530i xDrive, along with the 530i, is powered by a 2.0-liter TwinPower Turbo engine. It's an inline four-cylinder version with 248 horsepower. Torque is equally respectable at 258 pound-feet. These are perfectly acceptable numbers, but the 540i is available for anyone wants more out of his or her vehicle.

The 540i has a larger engine with a displacement of three liters. It's a TwinPower Turbo engine with six cylinders. The way it has been designed allows it to generate 335 horsepower and 331 pound-feet of torque.

Moving past the engine, there are many similarities between the two trims. They both ride on 18-inch wheels with a double spoke design and have black chrome exhaust tips that look sporty. Inside the cabin, a noticeable upgrade is that the 540i has Dakota Leather upholstery, while the 530i xDrive has SensaTec upholstery. SensaTec is BMW's version of leatherette, and it's pretty close to looking and feeling like genuine leather without being the real thing.

Both trims have sport seats in front that are power-operated and can be adjusted in 16 ways. The adjustments include those that control the power side bolsters and lumbar support. With the memory system for the driver's seat and steering wheel, it can be easy to switch between different drivers.

The 530i xDrive and 540i come standard with a power moonroof. With just one touch, it can be either opened or closed, and the power sunshade can come in handy on warm days when more sun isn't necessary. There are other modern features, like windshield wipers that can turn on when they sense rain, a rear-view mirror that can automatically dim when bright lights are detected, and ambient lighting that's used in various parts of the cabin.

Apple CarPlay is included with both trims, as is BMW TeleServices. This feature can monitor how the vehicle is doing in terms of mileage and maintenance, and it can send a message to the dealership so they'll know to call to schedule an appointment. BMW Remote Services is also convenient to have. With this package, drivers can remotely lock/unlock their doors, pinpoint the exact location of their vehicle, and keep an eye on performance statistics.

The infotainment system on the BMW 5-Series uses Live Cockpit Professional technology. These two trims have a large instrument cluster that displays key data as well as a large central information screen, both of which are over 10 inches. The iDrive 7.0 system can be controlled with the touchscreen or the iDrive touchpad, and it can also accept voice commands. With Bluetooth and HD Radio, the infotainment system is ready to keep people connected and entertained. Navigation is built into both trims, and it can be very helpful whenever someone is trying to find new places or avoid traffic on regular routes.

These trims have many safety features to protect drivers and their passengers. The BMW 5-Series can detect potential frontal collisions and hit the brakes if the driver doesn't respond to the alert in time, it can send out a warning when someone is veering out of a lane or about to venture into someone else's path, and it can look out for pedestrians. Further, it can provide some guidance when parking, as it has sensors that will send out warnings if the vehicle is getting too close to obstacles.

When accidents seem imminent, windows and the moonroof will automatically be closed, the safety belts can be tightened, and post-crash braking will be activated. If the 5-Series is ever involved in a collision, it can be set up to automatically call emergency services.

With these two trims, the difference is that the 540i xDrive comes with BMW's all-wheel drive system. Having xDrive can make a difference when the conditions are less than ideal. It allows the vehicle to respond appropriately to any changes in the road, and one of the best things about it is that drivers don't have to do anything but appreciate the excellent handling.

The 540i xDrive has a slight edge on the 540i in the acceleration category, but most people might not notice this difference. There is a very minimal drop in highway fuel efficiency, as the xDrive version can achieve 29 miles per gallon instead of 30 miles per gallon.

Other than the fact that the 530e doesn't come with xDrive, there are some major differences between these two trims. The 530e uses an electric motor in conjunction with a 2.0-liter engine. As a result, it gets a combined MPGe of 69. The 530e is comparable to the 530i in performance, so it's definitely strong, if not as capable as the 540i xDrive.

In the 530e, there is a special eDrive button. It allows drivers to choose from AUTO eDrive, MAX eDrive, or Battery Control modes, depending on whether they want to be more gentle or more aggressive in their driving styles. Since the 530e is a plug-in hybrid, people can charge their batteries at home or at any public charging station. Note that the battery does not have to be charged in order for the car to run. This gives people a lot of freedom to explore and lets people stay flexible in how often they charge and where they can travel.

Inside, the 530e is similar to the 530i, so it's a little less refined than the 540i xDrive. It has SensaTec upholstery, unlike the 540i xDrive which has leather. Other than material, the seats are the same in both trims, as are the safety and technology components.

As one might predict from the pattern seen with the BMW 5-Series, the 530e xDrive's upgrade over the 530e is all-wheel drive. It can be hard to find hybrid sedans that have all-wheel drive, so this is a somewhat unique feature. With all-wheel drive, combined MPGe slips slightly to 65, but this is still an enviable number.

The M550i xDrive is the trim at the top of the BMW 5-Series line-up. It blows the other models out of the water in the performance category. It runs on a 4.4-liter M Performance V8 engine, which brings an amazing 523 horsepower and 553 pound-feet of torque. Like the other trims, it comes with paddle shifters on the steering wheel in case anyone ever wants to feel more in control of shifting.

To get to 60 miles per hour, the M550i only takes 3.6 seconds. This is almost unbelievable speed. The trade-off is that this BMW doesn't do as well with fuel economy. It can earn up to 18 miles per gallon in the city and 25 miles per gallon on the highway, but this isn't bad considering the capability.

Found along with the premium engine are higher quality suspension, braking, and exhaust components. Overall, the M550i xDrive can't be beat in terms of handling and the excitement it offers.

Its exterior upgrades include 19-inch wheels instead of 18-inch wheels, in addition to Icon Adaptive full LED headlights that look bright and modern. It has a special M rear spoiler and illustrated door-sill finishers. The trunk lid on the M550i is a hands-free model, and it can be opened by kicking underneath the sensor at the back of the BMW.

The cabin of the M550i xDrive is elegant and refined. It's the only trim to come with 20-way Multi-contour seats in the front. This lets drivers and front passengers find their perfect positions and levels of shoulder, thigh, and lumbar support.

The infotainment system on the M550i has been upgraded in comparison to what's found on the other trims. A Harman Kardon Surround Sound system is integrated into the M550i, and it consists of a 600-watt amplifier with a collection of tweeters, mid-range speakers, and bass speakers. SiriusXM Satellite Radio is included, giving people another entertainment option. The 530e xDrive and other trims only have the pre-wiring for SiriusXM Satellite Radio, and they use 12 speakers and a digital amplifier that has a power of 205 watts.

With the BMW 5-Series, there are quite a bit of options to consider. If one has the money to spend, then the M550i xDrive is the clear winner. However, not everyone has such a big budget, and in this case, the first question to ask is whether someone wants to drive a hybrid.

For those who care about lowering their gas consumption, the 530e is a smart choice. It boosts fuel economy considerably, and it doesn't require plugging in each day, though plugging in does help.

If the choices are narrowed down to the standard models, the 540i would be the BMW 5-Series to pick. It has a very capable engine and many luxurious amenities that can really be appreciated. The all-wheel drive is an add-on that would be practical if drivers think they'll ever deal with icy or otherwise slippery conditions.
Did you find this article useful?
Please rate this page. Select a star rating from 1 to 5 below:

Save Money on a 2020 BMW 5-Series:
Find New Car Clearance Prices - Many Vehicles are Selling Below Dealer Invoice Prices.