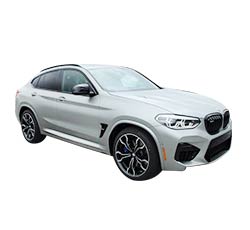 What 2020 BMW X4 Trim Level Should you Buy? What is the Difference Between Trims?

BMW calls its 2020 X4 a "Sports Activity Coupe" instead of a "Sport Utility Vehicle." This should signify to any potential buyer how the BMW X4 is designed. It's muscular and athletic, and it combines the best of what the SUV and coupe have to offer. If anyone is shopping for something versatile and spacious but still relatively compact and agile, the 2020 BMW X4 will fit the bill.

Borrowing a feature from the coupe, the X4 has a low roofline that gently slopes backward towards the rear spoiler. Up front, the double kidney grille is a classic BMW touch, and it highlights the prominent BMW logo. The vehicle looks a bit like it's haunched over, waiting for a moment to pounce, and its sculpted exterior and elegant curves help with this effect.

There are only two X4 models: the xDrive30i and M40i. The biggest difference is related to performance, and this guide will also go over the other differences so that potential customers can decide which model they prefer.

Note that both models come standard with xDrive and intelligent all-wheel drive. When driving conditions are good, power will be distributed between the front and rear axles, with the rear axles getting slightly more power delivered to them. If anything changes, such as when the vehicle drives up a hill, through an icy patch, or over a muddy road, the power will be adjusted accordingly. Drivers need not worry about how to distribute the power; they only need to know that their X4s will handle things well. The redistribution of power takes only milliseconds, and it's unnoticeable except for the fact that the X4 seems to always perform well in many different situations.

The X4 xDrive30i runs on a 2.0-liter, inline engine with four cylinders. This TwinPower Turbo model generates 248 horsepower and 258 pound-feet of torque. It takes approximately six seconds to go from a standstill to the 60-mph mark, and the top speed that this model can hit is 130 miles per hour. Fuel economy isn't the best, but it's still respectable, as this BMW can earn up to an estimated 23/28 (city/highway) miles per gallon.

The engine on the xDrive30i is paired with a Sport Automatic transmission that has eight different speeds. To make the experience a bit more exciting for those drivers who like to be in control, there are Sport and Manual shift modes. Paddle shifters mounted on the steering wheel are convenient to use.

In contrast, the M40i is powered by a larger engine with a displacement of three liters. It's a more performance-minded TwinPower Turbo engine, and it has six cylinders. When looking at the specifications, it's clear which one is the winner, as the M40i's engine can churn out 382 horsepower and 365 pound-feet of torque. The extra acceleration it comes with is noticeable, as it can reach a speed of 60 miles per hour in less than four and a half seconds. When properly equipped, the M40i can travel at a speed of 155 miles per hour.

The engine in the M40i is paired with the same transmission as seen on the other model. As one would expect, this high-performance BMW X4 requires some more gas to function at its level. Its fuel economy numbers are slightly lower than those of its counterpart, and it can earn an estimated 21/27 (city/highway) miles per gallon. Considering the power that the M40i has, this efficiency is still pretty solid.

A few other upgrades are found under the hood of the M version. First of all, it has a special M Sport exhaust system that's more effective than a standard component. It also has a more advanced suspension system and brakes that are better suited for a faster, more powerful vehicle.

Both trims have Hill Descent Control, which can keep the vehicle's speed at a pre-determined level. This helps the driver focus exclusively on steering rather than keeping track of both steering and braking. The two trims have Dynamic Stability Control as well. This system uses the brakes to boost control, and like the all-wheel drive system, it will kick into action on its own without being prompted by the driver. The result is a smoother and safer drive.

In terms of how the X4 is built, both trims have the same frame. Leg room in the front is 40.7 inches, and in the back, it's 35.5 inches. This amount of room is enough to hold a few adults in the back row. The cargo area behind the seating has a volume of 18.5 cubic feet. Folding down the second row expands the cargo area so the total volume is 50.5 cubic feet.

There are some differences in exterior paint color and design. The xDrive30i has nine different paint options, while the M40i only has eight options. They both offer bright colors, like Flamenco Red and Phytonic Blue, as well as neutrals, such as Glacier Silver and Alpine White. The xDrive30i has the addition of a Dark Olive metallic paint.

Looking around the exterior of the two 2020 BMW X4 trims, the differences may be noticed by some discerning customers. The xDrive30i rides on 19-inch ferric grey wheels with a Y-spoke design, and the M40i has the same size wheels, but ones with a double-spoke, two-color design. The xDrive30i has high-gloss chrome finishers on its tailpipe, and this chrome complements the Satin Aluminum trim. The M40i has finishers that are made out of black chrome, and this dark color is matched to a Cerium Gray found around the exterior and on the mirror caps.

Moving to the inside of the BMW X4, there are some upgrades found in the M40i trim that help it warrant a significantly higher price point. For example, it has power-operated front sport seats that can move in 14 different ways. This includes lumbar support that can be adjusted in four ways as well as power-adjustable side bolsters. The xDrive30i has power-operated seats that have those same side bolsters, but its seats can only be adjusted in 10 ways.

People have a choice of SensaTec upholstery or Vernasca Leather with the xDrive30i. There are several different color schemes to choose from, allowing for further customization. With the M40i, SensaTec and Vernasca Leather are both options, but there's the addition of several colors of Merino Leather. This type of leather is a little more sophisticated and can add to the elegance of the cabin.

Both vehicles have a panoramic moonroof that can be quickly slid open or tilted up to let in fresh air. When rain is detected, the windshield wipers and headlights will automatically turn on, and the M40i has automatic high beams that will switch on if the road ahead is particularly dark and no other vehicles are approaching. The power tailgate and universal garage-door opener in the two trims are convenient to use, and anyone who likes to keep things organized will appreciate the luggage nets, fastening points, and hooks in the cargo area.

Connectivity is a major factor when modern consumers are shopping for their next vehicles, and the BMW X4 does pretty well in this department. Apple CarPlay is standard, though Android Auto is not offered in the 2020 X4. USB ports and Bluetooth allow for smartphone integration, and with BMW's Connected Package Professional system, drivers can access real-time traffic information. Through BMW Remote Services, drivers can use their smartphones to lock/unlock their vehicles and pinpoint the exact location of their X4s. Navigation is always helpful to have whether someone is going into an unfamiliar area or simply trying to avoid congestion.

The audio system in the 2020 BMW X4 is something to be appreciated. The HiFi Sound System has 12 speakers strategically placed around the cabin, and the system is powered by a digital amplifier with 205 watts. HD Radio is included with both models, but SiriusXM Satellite Radio is only offered with the M40i version.

Another way in which technology is utilized effectively in the X4 is through Live Cockpit Professional, an advanced system that provides information to the driver. This system uses a 12.3-inch instrument cluster and a central display that's almost the same size. It also has a Head-Up Display that projects important data on the windshield, in a position that's easy to see, right behind the steering wheel. Through Live Cockpit Professional, drivers can either use the touchscreen, their voices, or a touchpad controller to view information, make adjustments, and control music playback. It comes with plenty of multimedia storage, enough to rival some smartphones and tablets.

There are several safety components in the X4 that can definitely play a role in protecting people on the roads. Since the X4 has standard LED fog lights, the situations in which there is low visibility aren't such an issue. The xDrive30i has LED headlights that have a cornering function to help with lighting up the road while turning. The M40i has an upgrade over that, as it comes with Icon Adaptive LED headlights that can adjust themselves according to the direction in which the vehicle is traveling.

Active Guard is the name of the package of driver-assist features. On both trims, it includes Frontal Collision Warning, which takes a proactive approach to warning drivers about potential issues, as well as Automatic City Collision Mitigation and Braking, which is the emergency braking feature. If it seems like a driver isn't reacting in time to prevent an accident, the X4 can apply pressure to the brakes on its own. In addition to recognizing other vehicles as potential obstacles, the BMW can also detect pedestrians in the roadway during the day.

The 2020 BMW X4 is clearly a well-designed vehicle. It combines many attractive elements to create a total package that many people would envy. While it has sporty, stylish elements, it feels luxurious and classy, and it has a highly capable powertrain.

When deciding between the xDrive30i and the M40i, there are certainly many things that one could think about, such as some exterior and interior details and slight differences in the infotainment system. However, the biggest factor to consider is performance.

Does the extra horsepower and torque equate to a better driving experience? For most people looking at BMWs, it probably does. Is it worth approximately $10,000? Maybe not.

If someone is interested in the BMW X4, the xDrive30i would be a great investment. It gives people something exciting to drive, and it treats them to high-end amenities in the cabin. If someone really values performance and feels like he or she needs over 350 horsepower to have fun, then the X4 M40i would be the right choice. In most situations, the extra capability isn't really required, but just because something isn't necessary doesn't mean it's not valuable.
Save Money on a 2020 BMW X4:
Are you Shopping for a New Vehicle? Find the Best Deals with "Free - No Hassle" Prices Quotes.