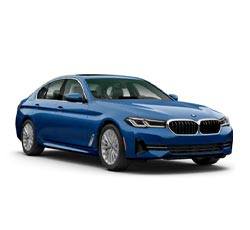 Should You Buy a 2021 BMW 5-Series? Here Are Some Reasons For and Against

The 2021 BMW 5 Series is impressive. As a sedan, it has two rows of comfortable seating, and as a luxury model, it has premium materials throughout the cabin. Anyone will feel pampered inside the BMW 5 Series, and for those who love performance, there's a lot of good news. There are multiple powertrains available on the 5 Series, including one that can provide more than 500 horsepower. There's also a plug-in hybrid available, which helps the 5 Series appeal to consumers concerned about making eco-friendly choices.

There have been a few aesthetic updates to the BMW 5 Series, making it feel more modern and sleek. The biggest news is that the 5 Series is now available as a plug-in hybrid. This move shows how BMW is committed to staying relevant and is working hard to take advantage of innovations in the industry. A few other changes are that the sedan's infotainment system has been enhanced with a 12.3-inch screen and that the safety package has been upgraded with a few more driver-assist technologies.

The 2021 BMW 5 Series is a great car to consider if anyone values performance. The base model, which is the 530i, runs on a 2.0-liter TwinPower Turbo engine. It delivers almost 250 horsepower and more than 250 pound-feet of torque. Given the size of the vehicle, this amount of power makes for an exciting drive, but this is only the starting point for the 5 Series.

The 540i model has an even larger twin turbo engine with a displacement of three liters. This results in 335 horsepower and about 330 pound-feet of torque. This difference is certainly noticeable, but if anyone wants the best of what BMW has to offer, there's the M model. The M550i has a massive V8 engine with a displacement of 4.4 liters. Horsepower is just shy of 525, and torque is a little over 550 pound-feet. With these incredible numbers, the M550i really stands out.

One other trim is the 530e. This is a hybrid that can be plugged in to recharge its battery. There's no need to worry about being stranded away from an outlet since it also runs on gas power. A regular outlet can be used to charge the vehicle, but if one prefers to cut down the time it takes to reach a full charge, a 240-volt outlet can be installed that will speed things up significantly. With this type of outlet, charging may only take a few hours to complete. The 530e comes with ample horsepower (288) and torque (257 pound-feet), which is more capability than the 530i.

3. Ready to Hit the Trails

The BMW 5 Series may not look like a rugged vehicle, but it can be equipped with all-wheel drive so that it can better handle difficult conditions. Each model comes with the option to get all-wheel drive; the exception is the M550i model which automatically has this feature. BMW uses the name "xDrive" for its AWD system. xDrive is always working so it can immediately determine whether to shift power around. Under normal conditions, most of the power is sent to the rear wheels, but this could change if there's any problem with traction.

The M550i offers more than just performance, though its powerful engine is a major selling point. (From a standstill, this model can reach a speed of 60 miles per hour in roughly three and a half seconds.) The M550i comes with special bumpers, exterior badging, exclusive 19-inch wheels, and a unique spoiler. Inside the cabin, the M550i has Dakota Leather seats and a sleek anthracite headliner. The leather-wrapped steering wheel has a sport design, and the components under the hood - such as the suspension, brakes, and differential - are some of the finest that can be found in the industry.

Many drivers spend a lot of time behind the wheel, and fortunately, they'll be very pleased with how comfortable the seats in the BMW 5 Series are. Base trims of the 5 Series have perforated SensaTec upholstery, a material that is soft and sophisticated. Front seats can move in 16 ways and come with lumbar support and side bolsters. There's even a memory function so that the driver can push one button and have the seat move into his/her favorite position.

On the higher trims, BMW has put in leather seats, and the front seats can be adjusted in 20 ways. Not only can they move back and forth and change their angles, but they can also be adjusted in terms of the amount of shoulder and thigh support they provide. In select trims, the memory function is included in both the front seats rather than just in the driver's seat.

As if having one massive screen wasn't enough, BMW put in two 12.3-inch displays in the 5 Series. The first is called Live Cockpit Professional, and it's located behind the steering wheel. It provides drivers with key vehicle information, and it has the ability to show directions and a map when the available navigation system is engaged.

The other display is mounted centrally on the dashboard, and it can be controlled via its touchscreen, voice commands, or a manual controller. This lets people find their preferred ways to interact with their infotainment systems. With Bluetooth and smartphone compatibility, people can easily play downloaded music, communicate through phone calls or texts, and access certain apps.

Armed with an array of safety components, the 5 Series can do a good job in protecting its passengers and those around it. Numerous warning systems are in place to make the driver more aware of objects in front of it, vehicles in blind spots, and the speed limit. Giving people more information when it seems like they need to shift their focus can play a role in preventing accidents.

In those cases where an accident is about to occur, the vehicle can tighten up the seat belts, close the windows, and get ready for braking after impact. It also comes with an Automatic Collision Notification feature so that people can get help right away.

Though it's a luxury car that comes with a wow factor, the 5 Series makes sense from a practical standpoint in a few ways. It can fit five people, and it has a trunk that can hold about 14 cubic feet of items. This can be ideal for long trips away from home or fun adventures that require some extra gear.

The 5 Series shows it class with its exterior features. It has a kidney grille that immediately identifies the car as a BMW, and its strong front bumper and narrow, slightly angled headlights work together to make a great first impression. Some trims use 18-inch wheels and others have 19-inch ones. There can be chrome exterior trim, metallic paint, and elegant accents on the vehicle. Sitting low to the ground, the 5 Series has a wide stance and looks just as athletic as it really is.

With the Digital Key program and the BMW app, people can program their smartphones to act as their 5 Series keys. Smartphones can be used to lock and unlock the doors and even to start engines, all in a similar fashion to how some advanced key fobs work. Making this feature even better is the fact that more than one smartphone can be set to act as a car's digital key. Someone can let his/her friends or family members borrow the car without having to exchange a physical key back and forth.

1. Be Prepared for the High Cost

If the plug-in hybrid model sounds intriguing, just know that its electric battery takes up some space. Rather than take any cubic feet away from the cabin, BMW has chosen to use some of the trunk space to store the battery. The hybrid version of the 5 Series has a trunk volume of around 10 cubic feet, which is pretty small by most standards.

For such a premium price, one might expect the 5 Series to come standard with leather seats. That isn't the case, and while SensaTec comes close to the real thing, it isn't genuine leather. There are several types of more affordable vehicles in the market that do come with leather, so this might be considered a misstep.

The Genesis G80 is a new addition to the luxury market, and it's poised to garner a lot of position attention. While it's certainly upscale and sleek, the G80 doesn't have the same amount of horsepower that the BMW 5 Series can have. Going along with this, its style is a little more subdued rather than being sporty like the BMW is.

The same can be said about the Audi A6 when comparing it to the BMW 5 Series. It does well in the performance department, with more than 330 horsepower, but it doesn't come anywhere near the M550i's mark. Its stylings can be considered more classic and refined, as opposed to being bold and athletic like what's seen in the 5 Series.

BMW has built a loyal following thanks to its commitment to quality. The 5 Series is a pleasure to drive whether one gets the 530i, the M550i or something in between. What's really nice is that there are more than a few trims to consider, some of which are equipped with all-wheel drive to improve handling. With several premium components and high-tech systems, the BMW can greatly enhance the experience of driving.