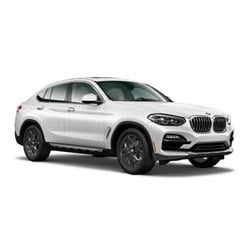 Should You Buy a 2021 BMW X4? Here Are Some Reasons For and Against

It's always nice to find a vehicle that's a bit different than the rest. The 2021 BMW X4 is just that. It's not quite an SUV, nor is it a sedan. Rather than calling it a hatchback, BMW has gone with the term "Sports Activity Coupe." This description is fitting, as the X4 is certainly sporty and athletic. It has a streamlined, sleek appearance, and many classic BMW elements make it stand out as a luxury model.

On first glance, it may seem like the 2021 X4 is pretty much the same as the 2020 X4. While it's true that there haven't been too many exterior upgrades, there have been some significant changes inside the cabin. People who love their technology will appreciate having a 10.25-inch touchscreen as well as SiriusXM Satellite Radio. Having Apple CarPlay is a huge bonus that iPhone users will be happy to hear about. Along with the technology used for mostly entertainment purposes, there are also more advanced components in place to keep people space. The safety package has been beefed up in the X4 to include a number of standard driver-assist systems.

There's no way to mistake the X4 for another model. It has the look of a vehicle that's ready to speed off in an instant. Since its roof slopes down towards the rear of the vehicle, it feels very aerodynamic. It's not too wide, nor too tall, nor too cumbersome. It has a nice size, with an overall length of 187.5 inches and an overall height of just under 64 inches. When many people see the X4 on the road, they'll definitely pay attention to how futuristic it looks.

When driving down the roads, taking turns at relatively high speeds, and dealing with unpredictable road conditions, having an all-wheel-drive vehicle can inspire a lot of confidence. BMW's all-wheel-drive system, which is called xDrive, can significantly improve handling in various situations.

xDrive is always working, ready to make the necessary adjustments if certain wheels have better grip than others. If all is going smoothly, then a little more than half of the power is sent to the rear wheels while the remaining amount gets sent to the front axle. In an instant, that power delivery ratio can shift to optimize control and stability.

3. Many Powertrains to Choose From

There are a few different models of the 2021 BMW X4. The most significant way in which they can be differentiated from each other is by looking under their hoods. The base model, which is the xDrive30i, uses a four-cylinder engine with a displacement of two liters. This engine can output nearly 250 horsepower, and it's a twin-turbo model.

Also a twin-turbo model is the engine that powers the M40i trim. The M40i's engine is larger, with a displacement of three liters, and it has six as opposed to four cylinders. This size increase pays off big time, as the engine can generate 382 horsepower and almost 370 pound-feet of torque.

Finally, there's the 2021 BMW X4 M. Because of some tweaking to the engine, the X4 M gets to have 503 horsepower. Torque is over 465 pound-feet. It's almost hard to believe that a coupe can have so much capability.

It wouldn't be a wise move to put in high-performance engines alongside run-of-the-mill mechanical components. The good news is that BMW hasn't done that at all. Instead, it has installed premium suspension and steering systems to optimize how well the BMW X4 takes turns. Some trims have adaptive suspension to be even more responsive.

5. Get Ready to Launch

The X4 has something called "Launch Control." This system allows a driver to feel like he/she is behind the wheel of a jet plane. There are a number of steps that need to be followed in order to initiate Launch Control, and this is all part of the fun. When it's activated, the engine is primed to have peak performance, and everyone can sit back and enjoy the ride. For those times when it's not ideal to use Launch Control, there's the Sport driving mode that does a good job of making the X4 more responsive.

In a BMW X4, people can stay in touch with others, and they can maintain a connection to the internet through the vehicle's ability to act as a WiFi hotspot. This can make it easier to do basic things like make phone calls, send and receive messages, and look up information. The 10.25-inch touchscreen is large enough to be easy to read and interact with, but it's not too large that it takes up all the space up front.

Navigation is standard, and this can be so convenient to have when trying to find new destination and/or avoid traffic. Directions and a map can be displayed on the digital instrument cluster behind the steering wheel.

The X4 is much more than a sedan, as it has a sloped roof in the back that gives it more cargo space. Behind the second row of seats, the vehicle can hold about 18 cubic feet of items. Those back seats can fold down to create more room. The rear seatbacks have a 40/20/40 configuration, so one, two, or all three seats can be lowered. When all three are folded down, there's about 50 cubic feet of space.

There are plenty of luxurious amenities inside the cabin of the X4. The seats can move in up to 14 different ways, giving the driver and front passenger the opportunity to find the best seating positions. The driver benefits from having a memory function in his/her seat; this memory function is also included in the exterior mirrors. With premium seating material and door trim, everything feels sophisticated.

Just like the inside the X4 feels like it was designed for VIPs, so does the exterior. Every X4 comes with a power sunroof to let the light stream in, and 19- or 20-inch wheels add to the sporty nature of the vehicle. The X4 can either have a satin aluminum or a shadowline trim as an extra detail, and the M model has a rear spoiler and exclusive quad tailpipes to stand out even further.

The X4 is built for people with adventurous spirits. To keep them safe, BMW has installed several driver-assist technologies into the X4, on top of all of the standard components like anti-lock brakes and a rearview camera. The X4 can come with adaptive LED headlights that can adjust their direction to better light up the road, and it can also come with blind spot monitoring, a warning system that will engage when the driver is veering out of a lane, and a system that works to prevent frontal collisions. In the unfortunate situation where an accident does occur, the X4 will activate post-crash braking and can call for emergency assistance.

1. Second Row Not Too Spacious

There's only about 35 inches of leg room in the back seat of the BMW X4. This is similar to what one might find in certain sedans and compact SUVs, but it's noticeably less than what many larger models have to offer. If people anticipate having adults riding in the back of their vehicles on a regular basis, they may want to look elsewhere.

2. Not the Cheapest Vehicle

It's not a surprise that the X4 isn't that affordable. As a BMW, it has a luxury price to go along with its luxury amenities. The base model is priced at over $51,000, and things only go up from there. In fact, the price can go up significantly. The premium M model that does so well in many areas has a cost that reflects its qualities. Its starting price is over $73,000.

3. Sloping Roof Isn't Ideal for All

If the X4 had a more traditional SUV shape, or if it was designed like a wagon or hatchback with a more vertical rear end, it would be more practical for many consumers. This would open up the cargo area by quite a bit, and it would make it much easier to accommodate bulky items. A side benefit is that the back seat wouldn't feel as cramped since the second-row head room would likely be increased by a few inches.

Just like BMW, Audi is a company that has built a reputation for building high-quality vehicles. Its Q5 is a solid performer that looks stylish and feels modern, but it just doesn't have the same athletic nature that the X4 has. Most importantly, it doesn't have anything close to the premium M models that BMW makes. The horsepower in the X4 M is far above anything that the Q5 can achieve.

There are many trims of the Jaguar F-Pace, but at many levels, the X4 can out-muscle the F-Pace. Since the BMW has Launch Control, its power can really be harnessed. In regards to style, the F-Pace and the X4 are almost in different classes. The F-Pace looks a little more subdued while the X4 has some bold details that ask for attention.

If someone is looking for a vehicle that's the type to make a lasting first impression, the 2021 BMW X4 would be a great choice. Packed with high-end features on the interior and exterior, the X4 gives consumers a treat. Plus, it has advanced systems that people will surely appreciate. Given the fact that there are several trims of the X4, customers with different types of preferences can find what they're looking. They'll be satisfied whether they want something fun and spirited or a model that truly is a competitor in the performance department.