2014 Buick Enclave Pros vs Cons. Should You Buy? 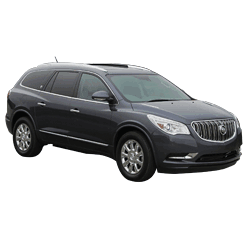 The 2014 Buick Enclave is a part of the crowded full size crossover field yet it grades out towards the top of the class. The Enclave is best characterized as incredibly spacious, family friendly, durable and upscale. While it is comfortable and full of technological gadgets and features, it isn't as costly as the upper end full size luxury crossovers. Its MSRP starts at just under $39,000 and fully loaded Enclaves top out at the $48,000 mark. There are no longer Enclave trim levels like CX or CXL. Customers simply order the options that they'd like and the price increases accordingly. This level of customization and simplicity is warmly welcomed by most Enclave buyers.

The Enclave seats up to 8 people with the help of second row captain's chairs and a second row bench seat. This is comparable to the spacious GMC Acadia and Chevrolet Traverse. Yet the Enclave has stylish exterior aesthetics and plenty more features like standard triple zone automatic climate control, xenon headlights and an IntelliLink touchscreen with smartphone application integration. Yet it is worth noting that the Acadia and Traverse come a bit cheaper than the Enclave.

There's also the Ford Flex which has more of a wagon look than that of a truck. The Flex boasts a turbocharged 6 cylinder engine. Similar to the Mazda CX-9, the Flex is quite spacious and has a bit more precise handling and agility than the Enclave due to their smaller size. The Infiniti QX60 and the Acura MDX are also a bit smaller but they have plusher interiors, comparable tech features and the QX60 even boasts the option of a hybrid powertrain. While the competition is stiff, the Enclave still emerges as a leader in the large size crossover niche due to its gigantic cabin, superior aesthetics and acceptable price level.

This year's Enclave hasn't changed much from the '13 version. The interior has a bigger touchscreen and a softer dash. There's also two USB ports that are "charge only". Lane departure warning and forward collision alert systems are now available.

1) For a large size crossover vehicle, its exterior is quite curvaceous and stylish. There is a waterfall style front grille and smooth and subtle side curves.

2) The Enclave performed well in Edmunds performance tests. An all wheel drive Enclave traveled from 0 to 60 mph in only 8.6 seconds. This is a good time for a six cylinder large size crossover.

3) The Enclave has more cargo capacity than its competitors with 23.3 cubic feet of space even with the third row seats put down. When they're lifted, there's 68.9 cubic feet and an amazing 116.3 cubic feet when both the second and third rows are stowed.

5) Aside from the optional features that can be purchased a la carte, there's also a plethora of standard features. These include but are not limited to a OnStar telematics, an IntelliLink electronics system, satellite radio and Bluetooth connectivity.

6) The Enclave has an unbelievable amount of safeguards. They include a blind spot warning system, a forward collision alert system, a cross traffic alert, stability control, antilock brakes, rear parking sensors and OnStar assistance. There's a large airbag that will deploy between the Enclave's front seats during a side impact collision as well as full length side curtain airbags and front outboard side airbags.

7) The Enclave is an enormous vehicle and its braking abilities are quite impressive. During Edmunds testing, the vehicle stopped from 60 mph in 126 feet. This is slightly above average for vehicles in the large size crossover niche.

8) The Enclave fared well in crash testing. It received five stars for its front and side impact protection. It also got top marks in the Institute for Highway Safety crash tests. The Enclave earned the best possible rating of “Good” for its performance in roof strength, side impact, moderate overlap and frontal offset tests.

9) The controls on the dash are designed with the user's experience in mind. The temperature is changed with three knobs that are simple to turn and prominently placed. The IntelliLink 6.5 inch electronics interface has a clean layout and is located where the driver can easily see it.

10) The vehicle has an incredible amount of passenger space. The Enclave's first and second row passengers will appreciate the vehicle's significant leg and head room. Although the Enclave is gigantic, passengers enjoy a comfortably quiet ride with little road noise and plenty of room to stretch out.


Reasons you may not want to buy a 2014 Buick Enclave

1) The Enclave's third row seats are very small and can only fit small sized adults or kids. This is one category where some of the Enclave's competitors like the Ford Flex come out on top.

2) The Enclave has a couple unnecessary aesthetic additions. A C-pillar divides the vehicle's glass and serves as a blemish on an otherwise attractive exterior. Also, the hood has ventiports that don't serve a purpose except to make the Enclave a bit more expensive.

3) The Enclave lacks the option of an 8 cylinder or turbocharged engine. Its reliance on a 3.6 liter six cylinder engine with 288 horses is part of the Enclave's family friendly ethos. So, anyone looking for a revved up, sporty ride from their large crossover will have to look elsewhere.

4) The Enclave is affordable but it certainly isn't cheap. Families on tight budgets might want to consider a bare bones Enclave without all the bells and whistles in order to keep it under the $40,000 mark.

5) Although the Enclave seats up to 8 people, its fuel efficiency isn't that great. It averages 17 mpg in cities and 24 on highways. This is comparable to competitors like the Ford Flex but there are crossovers that are a bit smaller (5 seaters) like the Mazda CX-5 that will hit the 30 mpg mark. Yet they won't hold those extra 3 passengers like the Enclave can.

The Buick Enclave is a serious competitor in the family size crossover field. While it will cost a pretty penny, it is definitely worth it, considering that many of its competitors are priced higher while offering similar features. It has an amazing amount of passenger and cargo space without compromising ride quality and vehicle responsiveness. This year's Enclave is the entire package and a large one at that.