2015 Buick Enclave Pros vs Cons. Should You Buy? 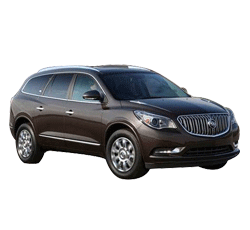 Should You Buy a 2015 Buick Enclave? Here Are Some Reasons For and Against

Since making its debut in 2007, the Buick Enclave has evolved into a premium full-size crossover SUV. This model makes a great family vehicle and it's designed specifically for those with a lavish taste. This guide provides a quick glimpse on the 2015 Buick Enclave along with the top ten reasons to purchase this car. Several downsides of this Buick are also pointed out and they might dissuade some drivers from making a purchase.

The 2015 Buick Enclave retains most of the features from the 2014 version. The most notable new addition is an optional steering wheel that boasts a wooden finish and embedded heating elements. The ten paint options include luxurious finishes such as Champagne Silver Metallic and Crystal Red Tincoat.

Top Ten Reasons to Buy a 2015 Buick Enclave - The Pros

The standard 3.6 Liter V6 engine is capable of producing up to 288 horsepower. This engine block can generate up to 270 pound-feet of torque when the tachometer reading is only 3,400 RPM. Direct Injection fuel delivery and Variable Valve Timing (VVT) provide modern efficiency that's rarely seen in full-size crossover SUVs that run on inefficient V8 engines. The six-speed automatic transmission system offers smooth gear shifting with the Front Wheel Drive or All Wheel Drive. With the trailering package, this Buick can tow up to 4,500 pounds.

A tri-zone climate control system guarantees that everyone in the Buick Enclave is comfortable. Separate temperature and fan speed settings can be applied on the driver's and front passenger's side. The front seats are also heated and ventilated. Additionally, all of the occupants in the back row could customize their own settings including the airflow direction.

Having an ebony finish, the perforated leather upholstery adds a lavish character to all of the seats. The steering wheel is also wrapped in high-quality leather. Mahogany wooden accents add extra sophistication to the interior of this Buick.

A 6.5-inch touchscreen offers excellent multimedia support in the central console. NavTraffic provides accurate turn-by-turn directions in the navigation system. The Buick IntelliLink makes it easy to sync a smartphone. Three USB ports and an auxiliary jack could be used to connect other mobile devices including MP3 players. The multimedia console is linked to a rear entertainment system featuring a DVD player and two headphone jacks. Additionally, an optional mobile hotspot package can be installed in order to deliver internet access inside the cabin.

Featuring 10 speakers, the Advanced Bose audio system is perfect for playing more than 100 channels on SiriusXM Satellite Radio or other stations on the AM/FM bands. Thanks to the unique Quiettuning design, the interior acoustics aren't interrupted by external noise. Triple door seals and laminated windshields ensure proper distribution of sound throughout the entire vehicle.

Three rows of seats provide space for up to eight total people inside the Buick Enclave. The second row has a unique Smart Slide design with a 60/40 split bench layout. The third row also has a 60/40 configuration that can be folded to increase the amount of floor space available in the cargo area. Both front seats have an eight-way power adjustable design with preset positions.

Few crossover SUVs are loaded with so many high-tech alert systems found in the Buick Enclave. The Forward Collision System gives the driver a heads-up when following the vehicle ahead too closely. The Lane Departure Warning is activated when the wheels of the Enclave drive through multiple lanes. Utilizing radar sensors, the Side Blind Zone Alert is another digital monitor that's designed to minimize crashes. The rear vision camera displays wide-angle views that are displayed on the central multimedia console. When backing out of a parking space, the Rear Cross Traffic Alert activates if oncoming traffic is detected.

The signature Stabilitrak system makes it easy to handle the Buick Enclave in dangerous situations such as slippery roads or sudden maneuvers. This technology optimizes traction and has rollover mitigation capabilities. Such mechanical controls are engineered to control this relatively bulky crossover SUV that has a curb weight of nearly 5,000 pounds.

The headlamps are powered by High-Intensity Discharge (HID) Xenon technology to provide bright illumination. The blue tinted lenses intensify the lighting and also give this Buick some modern flare. The automatic headlamps also adjust according to outdoor visibility.

Side and curtain airbags protect all passengers during a crash. Additionally, the driver is protected by front and seat-mounted airbags. The inflatable restraint system in the seat belts automatically activates when a sensor detects sudden stops or collisions.

When using voice commands, it might be frustrating to browse through the extensive menus of the navigation system in the Buick Enclave. Additionally, the manual dials and buttons on the digital console may distract the driver even when trying to make simple adjustments such as tuning to the Pandora internet broadcast.

The 2015 Buick Enclave has a starting price of over $39,000. Upgrades to the leather or premium package bring the final price to well above $40,000. Such deals specifically appeal to drivers who can spare some extra money when seeking luxurious features in a family-friendly car. The Enclave is the most expensive 2015 Buick model.

Capable of getting up to 24 miles per gallon on the highway, the Buick Enclave has a rather average fuel economy for a full-size crossover SUV. Drivers might feel the pain at the pump every time the 22.0 gallon fuel tank is filled with premium unleaded gasoline. It seems that mechanical efficiency is sacrificed a bit for the sake of luxurious features.