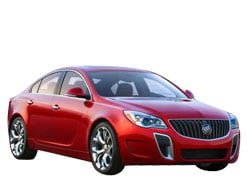 Should You Buy a 2016 Buick Regal? Here are the Pros and Cons

The 2016 Buick Regal is part of Buick's attempt to claim a new identity as a hip and even slightly upscale brand. The commercials speak for themselves: the company is apparently trying to reinvent itself. The Regal is Buick's midsize car, and the 2016 edition continues the trend of modernizing the Buick offerings. In this article, we will run down some of the best reasons to buy a 2016 Buick Regal, a few reasons to hold off, and compare the car to its closest competition.

New in 2016
The current design of the Buick Regal dates to 2011, which is when the model came back into production after a long hiatus. The 2016 Buick Regal sticks to the same basic design but provides some essential updates and tweaks that keep it fresh, like a modern infotainment system.

The Regal is not in an upscale segment. It is meant to appeal to people who need a small car and are on a bit of a budget. That said, it has excellent handling that gives it a near-luxury feel. The handling is tight and responsive, leaving many people surprised by how much it feels like a more expensive car.

The infotainment system on the 2016 Buick Regal has all of the bells and whistles that are common in the 2016 fleet, like app connectivity, voice control, and Wi-Fi. Again, these come standard on the Regal when many of them are typical options. That gives the base model another layer of luxury. The options and packages add even more tech, but even the standard set is more than most of the competition.

The material and design of the 2016 Buick Regal's interior are excellent. The common theme of high quality at a low price persists here, but it is not just about leather and metal. The layout of the console and dashboard are thoughtful and intuitive, making the car easier to learn.

The 2016 Buick Regal starts at a little over $27,000, and options, packages, or higher-tier trims move up from there. Considering what comes standard with the car, this is quite a deal. The 2016 version's attention to contemporary feature sets gives it great value for the money.

The sound system deserves its own point. The standard is a seven-speaker set that delivers clear sound to the entire vehicle, and the optional upgrade is a nine-speaker Bose set that ups the ante regarding quality.

The 4.2-inch touchscreen is a little smaller than what some other cars have, but the 2016 Buick Regal makes up for that with a clean, simple interface and voice control. The driver or passenger can swipe through the various apps and menus quickly and easily. Speaking to the car with voice commands is also quite easy. The voice recognition software is intelligent enough to adapt to many variations on basic commands.

7. Smooth Ride
The handling of the car already made this list, but combine that with the suspension and optional turbocharged engine and the 2016 Buick Regal delivers an unexpectedly smooth ride. It won't match up to luxury-tier cars, but it certainly outperforms in its class.

Perhaps due to the small four-cylinder engine, the Regal does a good job at sealing off noise from the cabin. The quietness of the ride pairs well with the car's handling, contributing to the overall impression of quality.

In any available color, the 2016 Buick Regal looks sharp. It has clean lines and a lean, mean front with a vertical grille. The car is low, with a sloping roof that gives it an aerodynamic and aggressive appearance.

Not only do many features come standard on the 2016 Regal, but there are quite a few cutting-edge options available. These include driver assistance tools like adaptive cruise control and lane change warnings, and those upgrades are often worth the money.
Buying Tip: To avoid overpaying on a new car, shop prices online first. Get up front pricing before you walk into a dealership. We recommend the following free services; Car Clearance Deals, NADAguides, CarsDirect & Motortrend.
These free services will offer you the lowest prices and supply you with multiple competing price quotes. You will know the best price before you visit the dealer.

The optional turbocharged engine is good, but the basic four-cylinder is rather weak and disappointing. That makes the engine upgrade a near-mandatory one.

The sloping roof and cramped space make the back row of seats less comfortable. Tall people might have trouble fitting in without feeling compressed.

The Regal gets only 19 miles per gallon in cities and 31 on highways, and that is below average for this segment. The primary complaints about this car, in fact, are mostly related to the engine, and this is no exception. There could a change inbound for 2017.

The 2016 Buick Regal competes against many different cars in the midsize segment. Similarly priced models include the Acura TLX, which has a superior engine but weaker handling and design. The Infiniti Q50 also has a more powerful engine but lacks access to the same features as the Regal.

The Regal in 2016 is a rather good car that suffers from a few clear flaws. The next iteration needs to deliver a more efficient and powerful engine, and the rear row of seats, as well as the trunk, should probably get a slight redesign. Other than that, this is a car squarely in the upper reaches of the midsize category, with many aspects that approach luxury tier. It manages to deliver a smooth ride and establishes itself as a car to beat. That is a powerful statement from a brand trying to reinvent itself.
2016 Buick Buying Guides: