2016 Buick Verano Pros vs Cons. Should You Buy? 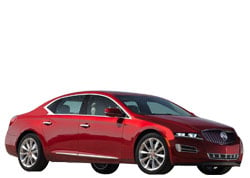 Should You Buy a 2016 Buick Verano? Here are the Pros and Cons

According to vehicle reviewers, the quiet, smooth ride of the 2016 Buick Verano and its well-constructed cabin makes the car have an upscale feel. The Buick Verano makes an excellent vehicle option for young professionals who are out for premium amenities without having to break the bank.

As the Verano is not as mainstream compared to, for example, the Lexus IS or the Infiniti G originality also becomes a plus on its side.

The Verano along with its top line Turbo variety stand out prominently in the entry-level segment of luxury cars with their value proposition and refinement. Coming at a starting price of below $25,000, the Buick Verano is offering a very comfortable ride for that kind of money.

The interior appointments of this car are comparable to those found in any luxury car of similar size.

The cabin of the 2016 Buick Verano has an upscale feel, thanks to its handsome design, fine build quality as well as first-class materials. The 2016 Verano is bringing qualities of the American luxury car into the realm of the small car. If you're determined to acquire a compact sedan, this is a solid choice.

While the Verano's handling can’t be called invigorating, it is certainly competent. The small sedan is composed and steady around turns, with precise steering at suitable levels of effort. These are inviting attributes that go towards reinforcing its aspirations as a powerful luxury car.

If one word could be found for describing the Buick Verano, it would be ‘comfortable.’ However, that should not be a big surprise, after all, it's a Buick, yet this remains a significant distinguishing factor among lots of other compact sedans.

Although the 2016 Buick Verano may not be deemed as being extremely sporty, it becomes pretty quick if you go for the turbocharged 4-cylinder 250-horsepower. Attaining 60 mph in less than 6 seconds, the Verano Turbo gives you plenty of kick.

According to auto reviewers, the handling of the 2016 Buick is composed, although not really athletic. However, the critics point out that the car’s steering is sharp, adding to your driving experience. Most reviewers indicate that the real strength of the Verano lies in its luxurious and smooth ride.

The capable handling of the 2016 Verano is largely because of its power steering. Possibly, that is the most formidable mechanical suit for many non-turbo car models. The power steering system felt perfectly responsive and weighted, bringing precision and quickness to every turn.

Your input as the driver is well-managed by the chassis of the Verano, even when you are at faster speeds. This is a sure “fun-to-drive” factor right there.

Entertainment in the Verano lower editions comes via a CD/MP3 player with 6-speaker stereo as well as a USB port. The Premium and Leather Group each come with a 9-speaker Bose premium system, additionally boasting three months of satellite radio complimentary service.

The 2016 Buick comes covered by 6-year/70,000-mile car powertrain warranty plus a bumper-to-bumper 4-year/50,000-mile warranty. The National Highway Traffic Safety Administration has not made or issued any safety recalls.
Buying Tip: To avoid overpaying on a new car, shop prices online first. Get up front pricing before you walk into a dealership. We recommend the following free services; Car Clearance Deals,   Edmunds,   CarsDirect,   NADAguides  &  Motortrend. These free services will offer you the lowest prices and supply you with multiple competing price quotes. You will know the best price before you visit the dealer.

The near-luxury subcompact, semi-sporting Buick sedan is certainly not an ordinary run of the mill vehicle, although it might not also be one that will turn in buyers in droves either.

The base 2016 Verano, according to the Environmental Protection Agency, receives 21/32 mpg city/highway, and the Verano turbocharged model receives 21/30. Auto reviewers indicate that neither of these fuel economy estimates is good for this class of vehicles.

Although the cabin gives you a pleasant upscale feel due to its superior design, critics point out that the dashboard of the 2016 Buick Verano is sort of cluttered with too many control buttons that appear similar.

Regarding acceleration, the 2016 Buick Verano non-turbo version falls short of expectations. The power punch is lacking and so is the needed power to make you confident enough to attempt passing on the left-lane passing as you cruise at fast speeds on the highway.

The Buick Verano 6-speed shiftable automatic come standard with a force-fed 4-cylinder.Optional is an available 6-speed manual transmission if you take your commuting a bit more seriously. While it may be deemed capable, this really cannot be said to be outstanding.

Although the National Highway Traffic Safety Administration crash-test ratings are an overall 5-star, the 2016 Buick Verano is no longer rated as a Top Safety Pick by the IIHS only for the reason that it has not yet completed its small-overlap crash test.

Clearly, the 2016 Buick Verano is not a Cadillac, but certainly, it's either not priced as one. While it may not grab any prizes for fuel efficiency, its looks or driving panache, the Buick Verano 5-passenger compact sedan is, nonetheless, a solid option choice for a small sized family that is on a budget or for the young professionals.
2016 Buick Buying Guides: