2017 Buick Encore Pros vs Cons. Should You Buy? 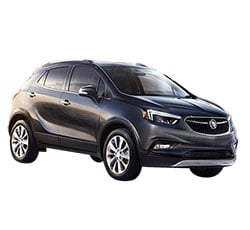 Should You Buy a 2017 Buick Encore? Here Are Some Reasons For and Against

The Buick Encore was an unusual vehicle when it was introduced in 2013 - an SUV shrunk down to the size of a subcompact. Since then, both Buick’s luxury rivals and mass-market brands have both launched their own versions of the subcompact SUV. Despite this, the 2017 Buick Encore remains as one of the best takes on the concept, combining versatility and utility with great styling, features and safety ratings.

The 2017 Buick Encore is entering its fifth year with some slight cosmetic changes and some additional technology functionality. It gets an updated version of Buick’s IntelliLink system that incorporates Apple CarPlay and Android Auto technologies. The Encore’s front end was also reworked, adjusting the Buick design elements to flow better with the car’s compact body.

The 2017 Buick Encore upends the traditional knowledge that bigger cars are nicer inside than smaller ones. Leather upholstery, metallic accents, soft-touch surfaces and high quality of craftsmanship match that of the larger and more expensive Buick vehicles. Lovers of comfort and style will appreciate the Encore’s upscale touches.

Despite its small size, the 2017 Buick Encore comfortably accommodates people of all sizes, and not just in the front seats. The rear seats give even taller adult riders some space to stretch out their legs. And when it is time to haul cargo instead of people, the rear seats, as well as the front passenger seat, fold down for extra versatility as well.

Small cars tend to let a lot of road and engine noise into the cabin, but the 2017 Buick Encore is incredibly quiet inside, even at speed. There are many layers of noise insulation and even sound cancelling noise generators in order to keep exterior noise out. This makes a drive in the Encore quiet and serene.

Buick’s infotainment system featured on the 2017 Buick Encore is intuitive and versatile. You can use either the standard 8.0-inch touchscreen or voice commands to control all of your car’s infotainment functions. It is a significant improvement over the old knobs-and-buttons systems used by many competing cars.

The base model of the 2017 Buick Encore has a full range of standard features and provides great value. An 8.0-inch touchscreen with IntelliLink, a rearview camera, power seating and even a Wi-Fi hotspot are on the list of features included on every Encore. Some of these features are not even available on some of the Encore’s competitors.

As befits a luxury car, it is possible to outfit the 2017 Buick Encore with lots of convenience, infotainment and safety technology. From 18-inch wheels and active safety with forward collision warning to navigation and Bose premium audio, the list of available options is far from sparse. For buyers looking for big-car luxury in a small package, this is perfect.

As a relatively new segment, reliability can be a concern with subcompact SUVs, but the 2017 Buick Encore scores well on that category. It earns an ‘above average’ score from the tough J.D. Power and Associates’ predicted reliability testing, making it one of the best subcompacts in that regard. That means more time driving the Encore and less time in the shop.

The small wheelbase and responsive steering of the 2017 Buick Encore make it especially well suited to navigating tight city streets or curvy mountain switchbacks. The electronic assist for the steering offers well-calibrated feedback, so you always feel in control.

Despite the small size of the 2017 Buick Encore, it offers all-wheel drive as an option on most models. That adds to its maneuverability and gives it some rough weather and off-road ability as well. It is one of the smallest vehicles so equipped, making it a great choice for buyers who want both a subcompact and all-wheel drive.

The 2017 Buick Encore sweeps top scores from both federal and private road safety agencies, making it a definite safe choice in the segment. The Insurance Institute for Highway Safety gives it the highest score of ‘Good’ on all tests, while the National Highway Traffic Safety Administration gives it an overall score of five stars and five stars on every subscore except rollover, where its tall ride height limits it to four stars.

The standard engine on the 2017 Buick Encore is a tiny 1.4-liter four-cylinder that generates a rather unimpressive 138 horsepower. With a couple of passengers in the car, that is simply not enough to give the Encore a responsive experience. The up-tuned 153-horsepower version feels better, but models equipped with it get pricey and it still fails to get the Encore’s power from the ‘adequate’ to ‘exciting’.

While the 2017 Buick Encore is quite spacious front to back, it is narrow. This makes the front seats feel a little crowded and makes difficult to put more than two people in the back seat. This undermines the Encore’s otherwise-comfortable passenger experience.

Despite its small size and relatively understated engine, the 2017 Buick Encore is not very fuel-efficient. The thriftiest model returns an average 27 miles per gallon city, 33 mpg highway and 30 mpg combined. For buyers who are looking at a subcompact for fuel savings or lower environmental impact, this is disappointing.

The 2017 Buick Encore is more expensive than most other vehicles in the segment, which limits its appeal to those looking specifically for the luxury features and the Buick brand name. Especially problematic is the Chevrolet Trax, which is mechanically identical and significantly cheaper. Buyers who don’t place a premium on luxury features or materials may not see as much value in the Encore.

The 2017 Buick Encore primarily faces off against other subcompact SUVs, both in the luxury and mass-market segments. More budget or space-conscious customers may prefer the Honda HR-V, which offers more cargo and passenger space and is less expensive, but the Encore has better features and safety scores, as well as a more upscale interior. Meanwhile, the Buick Encore offers the same technological features and luxury ambiance as the more premium subcompact SUVs like the BMW X1 or the Audi Q3 at a much lower price, though those cars offer more powerful engines and better handling than the Encore.

The 2017 Buick Encore delivers a well-rounded and comfortable driving experience while still providing plenty of utility room, features and upscale touches to keep most customers happy. Given its price point, it is a good value proposition to many buyers looking for such a car. It may, however, disappoint performance enthusiasts and bargain-hunters, who may find vehicles more or less expensive than the Encore more to their liking. However, for most people the Buick Encore will likely fall into the subcompact SUV sweet spot.