2014 Cadillac CTS Pros vs Cons. Should You Buy? 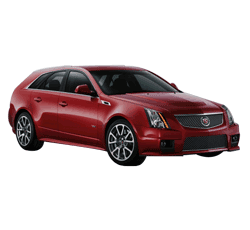 In this day and age, no matter what you're looking to buy, it may seem as though you have an abundance of choices. And when it comes to vehicles, that impression is quite correct. While certain segments may have stand-out class leaders, particularly when you're looking for a vehicle that excels at a specific task, such as hauling. But in other areas of the crowded motor vehicle marketplace, such as when it comes to high-end sedans, the surplus of options can make it difficult to confidently make a choice without performing a considerable amount of research. If you're in the market for a luxury sedan, the 2014 Cadillac CTS should be a strong contender, with many impressive features and few perceived flaws.

1) Refocused Mission for 2014: Prior to this model year, the Cadillac CTS attempted to me a it of a jack-of-all-trades for the brand, vying for attention against both sporty sedans and luxury sedans. For the 2014 models, Cadillac refined its lineup, assigning the ATS to take on sportier rivals and retooling the CTS to align more with the luxury offerings of competitors. Because of this, you can be sure that the 2014 CTS won't be sacrificing comfort and refinement for a bit of extra speed and pizzazz.

2) Powerful Engine: Although the CTS doesn't have a singular sports focus, that doesn't mean it isn't going to impress with its speed and power. With a 3.6-liter V6, the 2014 CTS pushes out 420 horsepower with 430 ft-lb of torque - plenty of power no matter what the category.

3) Impressive Fuel Economy: One step Cadillac took in transitioning the CTS from 2013 to 2014 was finding innovative ways to shed weight, such as through an updated version of the car's frame. As a result, the 2014 CTS gets an impressive 19 mpg city, 28 mpg highway.

4) Impressive Safety Alert Systems: Cadillac doesn't want you to abuse the power of the CTS, so it's outfitted the 2014 model with plenty of safety alerts to prevent accidents. Notable is the vibrating seat, which is turned on by an attempted lane change when a car is lurking in the CTS' blindspot.

5) Multiple Versions to Match Your Needs: Every 2014 CTS isn't like the others; in fact, there can be much variation in the CTS since it comes in sedan, coupe, and wagon body styles. This makes it more flexible and allows everyone - from those looking to commute to those looking to accommodate kids - to get the power and luxury of the CTS.

6) Unmatched Comfort: Whatever your views about the exterior, the interior of the 2014 CTS is relentlessly comfortable. The lengthened body allows for ample leg room in the front and rear, and an unparalleled 20-way driver's seat is available for those seeking unmatched comfort and just the right fit.

7) Standout Handling: The luxury category isn't typically known for astonishing handling, so the 2014 CTS easily outdoes the competition in this category. The CTS draws performance not only from its legacy as a sport sedan competitor but also due to the engineering refinements that reduced the 2014 model's weight. As a result, steering is responsive and sharp.

8) Luxurious Passenger Experience: Although the 2014 CTS is a lot of fun for drivers, passengers are not forgotten. With a number of entertainment options, a blissfully quiet cabin, large amounts of leg room and cargo space, high-quality materials, and smooth transitions from gear to gear, it is a pleasure to drive and ride in.

9) Impressive Array of Options: As you might expect from the large variation in the price of different versions of the 2014 CTS, Cadillac offers an unbelievably broad range of optional equipment and features. This allows buyers to make the 2014 CTS feel truly like their own, as options cover every conceivable category: power sunroof, rear cross-traffic alert, rain-sensing windshield wipers, 13-speaker Bose surround sound stereo system, automatic park assist, automatic climate control and much more are available.

1) Difficult Interior Controls: Although the 2014 CTS has remarkably responsive steering and is quite easy to control considering the power it is packing underneath the hood, there is one aspect of it that is difficult to control - the touchscreen. Much less responsive than the steering wheel, the touchscreen controls often take multiple taps to register a choice, and the choice is often only made after an extended period of searching for the right button. The digital display often feel much less than intuitive, which can be frustrating and overly distracting, meaning more times than not, a front passenger is required for ideal levels of safe operation.

2) Price Variability: No one entering the luxury sedan category is expecting to get a bargain, but it can be easy to get a skewed sense of exactly how much the 2014 will cost you to drive it off of the lot. While models start at $39,000 and change, tweaking preference and adding optional features can drive the price all the way up to $67,000 and change - a striking contrast.

3) Boxy, Angular Look: One aspect of the 2014 CTS that has drawn some complaints is the somewhat boxy, minimally contoured appearance of the CTS. Obviously, tastes vary when it comes to aesthetics, but the 2014 CTS does stand out in that it has more sharp angles and fewer curves than most of its competition.
Find New Car Deals Near You
Loading ...
Find Used Car Deals Near You
Loading ...
About Us
Privacy
Terms of Use
Disclosure
Disclaimer
Site Map
Contact Us
Follow Us: