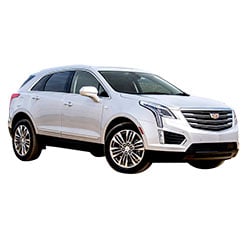 Should You Buy a 2017 Cadillac XT5? Here Are Some Reasons For and Against

The 2017 Cadillac XT5 offers high standard of refinement and comfort for a low priced luxury SUV. It also has all the fundamental elements of a quality mid-sized SUV. All new in 2017, the XT5 also offers advanced safety and technology elements with distinctive Cadillac luxury and styling.

The Cadillac XT5 makes a debut in 2017 replacing the SRX in Cadillac's crossover category. It offers buyers a crossover option with second row seating and better fuel economy.

The 2017 Cadillac XT5 makes fuel economy a high priority. The 3.6 liter V6 gets a fuel efficiency rating of 19 city and 27 highway. The 2017 Cadillac XT5 comes with standard auto stop and start engine. It also reverts to a 4 cylinder when power is not needed. As far as standard non-hybrid engines go, this is a very economical choice.

The interior of the Cadillac XT5 impresses most buyers with a luxurious and spacious cabin. The real wood or aluminum accents surpass the standards of other SUVs in this category. It also offers adjustable second row seating. Upgrades include heated steering wheel and heated front and rear seats.

As a luxury SUV, the 2017 Cadillac XT5 takes refinement to the limit while still offering everyday conveniences. The XT5 has 40-20-40 split rear seats so you can manage to transport passengers and cargo in one trip. It also has 63 cubic feet of cargo space with all three seats folded down. The XT5 also offers an optional hands free liftgate that allows you to open the rear hatch with a wave of your foot.

The 2017 Cadillac XT5 keeps drivers apprised of their surroundings with optional 360 degree monitoring which is displayed on the touch screen. The XT5 can also be upgraded to include rear view mirror camera technology. Instead of having the driver try to see around passengers through the rear view mirror, a camera on the rear of the vehicle projects an obstruction free view into the mirror.

The 2017 Cadillac XT5 can be upgraded to include Cadillac's driver alert system. The system is an optional upgrade that alerts the driver through vibrations in the seat. The system monitors the surroundings and aids the driver with lane keep assist and blind spot monitoring technology.

In addition to the driver alert system, the XT5 offers a driver assist package with automatic front and rear braking, adaptive cruise control and pedestrian monitoring. The XT5 also features an auto park assist feature. The driver alert system upgrade is also included in the package.

The 2017 Cadillac XT5 comes standard with the CUE infotainment system. The standard package includes 4G LTE hotspot, cordless phone charging capabilities, Bluetooth and a Bose premium audio system. Upgrades include satellite navigation. It is all controlled through an 8 inch touchscreen.

The Cadillac XT5 scores very well in predicted reliability. JD Power rates the XT5 four out of five in a class that normally sees two and a half out of five as average. The warranty from Cadillac includes a four year or 50,000 mile limited warranty and a six year or 70,000 mile powertrain warranty.

The 2017 Cadillac XT5 earned a Top Safety Pick award from the Insurance Institute for Highway Safety. It also earned a five out of five on all four National Highway Safety Administration safety categories.

In addition to the standard trim level optional features are available in three upper trim levels. The XT5 offers AWD capabilities in all three of those categories as well as luxurious enhancements to the interior.

Offering just one engine and AWD, the Cadillac XT5 does not allow the buyer many options. Though fuel efficient, the XT5 does not offer hybrid or turbodiesel capabilities like many of its competitors.

The 2017 Cadillac XT5 has a capable 310 h.p. engine, but does not excite drivers as much as other options in the category. Handling has been describes as adequate, but not very exciting.

Though big on room for passengers, third row seating is not an option in the 2017 Cadillac XT5. Many other entries in the luxury mid sized SUV category are equipped with third row seating which may appeal to some buyers.

The 2017 Cadillac XT5 has some refinement and luxury, but quality luxury features are lacking. The XT5 also has some quality upgrades, but not as many as some of the toughest competitors in the category.

The Cadillac XT5 offers stiff competition for luxury SUVs like the Lincoln MKX and the BMW X6. Offering a luxurious interior and all new look, the XT5 also has great fuel economy and good cargo space.

Though it offers a low price tag, the luxury mid sized SUV category is fiercely competitive with the best entries still way ahead of the XT5. The category includes the Tesla Model X and the Audi Q7, which offer superior luxury and refinement.

The XT5 does offer a lot of cargo space compared to other SUVs with second row seating.

The 2017 Cadillac XT5 comes into the luxury SUV category equipped with an ultra efficient engine and new design. It scores high in reliability and safety compared to most other luxury SUV's. It also features a low entry point price for upgrading to a luxury SUV and will be competitive among buyers looking to make the leap to luxury SUV.