2014 Chevrolet Equinox Pros vs Cons. Should You Buy? 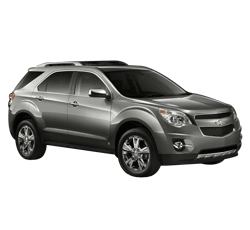 The Top 6 Reasons Why You May want to
Buy a 2014 Chevrolet Equinox:

Among the new breed of high quality cars, the sports utility vehicles (SUV) and "crossover" have become standards among American car buyers over the last two decades. These newly fashioned models include a variety of flexible and alternative fuel models along with special options and features available at the point of purchase. These offer customers the best of both worlds with plenty of room to store and carry items, while offering enough room within them for large numbers of people to sit comfortably. [ For the 2015 model see - Chevrolet Equinox Pros and Cons ]

The 2014 Equinox has new trim options for 2014.T he four trim options are: LS, 1LT, 2LT and LTZ. The four cylinder engine comes standard on each trim option.

Some Top Reasons to Buy a 2014 Chevrolet Equinox - the Pros

1) More than Just a Little SUV

The Chevrolet Equinox is categorized as a compact sports utility vehicle. In fact, it is oftentimes compared with other big automakers' compact SUV models as well as crossovers such as the Japanese made Honda CR-V. Although it may be classified as a sports utility vehicle, it truly functions more in the realm of a crossover than anything else. Also, with its spacious interior and refined technology and safety features, the Equinox is less of a compact and more of a mid-size. Therefore, when it comes to looking at the Equinox, potential buyers may see this as what may seem to be more than a label that reviewers or automakers have placed upon it. It stands to reason that the Equinox is shopped as more than just a little SUV.

2) The Main Difference is Power Versus Price

For 2014, Chevrolet offers two main versions of its Equinox. It can come with the standard four cylinder engine or the six cylinder version. In many cases, the exceptional fuel efficiency of the Equinox is based upon the four cylinder model, cranking out 22 MPG on the street and 32 MPG on the highway. While four cylinder model is more fuel efficient and more affordable, the V-6 Equinox may come at a steeper price but it offers the customer a lot more power under the hood and better ride on the highway and rougher terrain.

The stated fuel economy of the equinox is listed as 22 MPG on the street and 32 MPG on the highway. These are great numbers for even a crossover, but the fuel efficiency comes at a price. It is only based on the four cylinder model. The V-6 costs more and gets less fuel performance but offers a load of power for the price.

5) The Equinox is a Roomier and Spacious Crossover

The Equinox is more spacious in its interior and offers roomier seating than many of its competitors. Even with it offering roomy seating, it still lacks adequate storage capacity beyond the daily carpool or weekend getaway.

6) The Equinox Features New Technology for Safety and Entertainment

New technology has been incorporated into the design of the Equinox for both entertainment and safety. Steering wheel mounted audio controls and an MP3 decoder. It also features heightened security and safety features such as braking system and traffic control features.

1) Competitors Have More Favorable Reviews: Maxda CX-5 and Honda CR-V rank higher than the Equinox as far as affordability. The Buick Encore is the only other American automaker listed with a crossover/ compact SUV in the top 5 of the U.S. News online review report.

2) Negative Reviews: Some reviewers have slated the Equinox four cylinder engine as "sluggish" on the highway, especially in comparison to the much stronger and more powerful V-6 option.

3) Few Changes Over the Years: You could basically get the same vehicle in its 2010 – 2013 models. Why pay top dollar for the same car.

General Motors has a history of producing longstanding brands like GMC, Buick, Cadillac and Chevrolet, with models like the Bel Air, Impala and Camaro. Now with the Chevrolet Equinox, Chevy has done it once again and has put history in the making in the showroom and on the road for the entire world to enjoy and experience.