2014 Chevrolet Tahoe Pros vs Cons. Should You Buy? 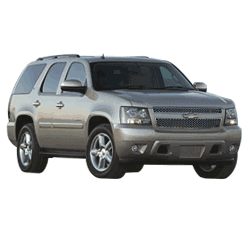 The Chevrolet Tahoe is a full-sized SUV that ranks in the U.S. News as #1 in the Affordable Large SUV category and #2 in the category of SUVs with three rows of seats. It is also touted as the best priced for long-termed ownership in the U.S. Off the bat, one can praise the new Chevrolet Tahoe for its V-8 engine, and fuel economy (15/21 MPG) both city and highway either on two- or four-wheel drive, one of the highest fuel economy estimates in its class. Further, the gas drivetrain and engine deliver a coupling that equals steady acceleration and to boot a bit of the V8 muscle-driven sound that big-car drivers have come to love. [ For the 2015 model see - Chevrolet Tahoe Pros and Cons ]

Characteristics of the 2014 Chevy Tahoe that cannot be read off of a sticker are plenty.

1. A smooth comfortable ride unexpected from such a large SUV

2. An uncomplicated interior, despite some complaints that the interior is lackluster and appears “outdated”

4. Exceptional manageability in tight spaces due to a small turning radius, making it easy to maneuver particularly for those who find it hard to park or otherwise operate an extra-large sized SUV in constricted areas

6. Capacity to hold up to 9 passengers

7. Clean, aerodynamic style impressive for such a large SUV

8. While lots of SUVs have downsized in order to accommodate the growing market demand for higher fuel economy, the Chevy Tahoe remains true to its traditional rugged, heavy quality that Chevy drivers love

9. Alongside some competitors like the Toyota Sequoia and the Ford Expedition, the Chevy Tahoe is considered the best large SUV for families chiefly due to the 2014 model’s no-nonsense interior in exchange for its ever-dependable durability and safety factors

10. Riding on the curtails of #9 of this list is the Chevy Tahoe’s 5-star rating from the National Highway Traffic Safety Administration in frontal and side impact crash kits – a top score rating that should carry over to 2015

1. Of course with the PROs always lingers a few Cons and the Chevrolet Tahoe is no exception. The last time the Chevy Tahoe was revamped aesthetically was in 2007. At that period the Tahoe’s new crisp clean lines and fortified body rigidity was enough to lend an overall sophisticated polish to such a rugged vehicle. Plus, its reputable towing and hauling capabilities carried over.

And so begins the old form over function debate…In a world that relies so heavily upon products having an upgraded, appealing look and the reputation that comes along with having such a look, a lot of prospective vehicle buyers view the Tahoe’s lack of style overhaul as a CON. The “jaded” interior stands out as an outdated feature that reveals the Tahoe’s age and dons more plastic parts that it should.

That being said, however, the Chevy Tahoe is in no way an ugly car at all. While its exterior design might not have you drooling, it certainly does give off an air of handsomeness that plays well alongside its rough appeal mainly due to the designers’ efforts to polish its surface and clean up its lines. Fashion-wise the vehicle stands in the same line as a basic two-box SUV overall look with its rounded corners, flared fenders, large bow-tie logo which falls in the center of the grille, and a couple of huge headlights that square off into the Tahoe’s fenders. Here we are reminded of competitors Nissan Armada and Toyota Sequoia which both exhibit an aura of the high-strung sort while the Tahoe’s design feels ideal for the driver that doesn’t need to show himself off too much.

2. Another “CON” has to do with the third row of seats in the new Tahoe. While competitors like the Ford Expedition feature a third row seat that is either removable or folds down flat to expand cargo space, the third row in the Tahoe barely flips up, making its only real benefit the ability to hold more passengers. That benefit has a flaw too, though: even though the third row fits three adults, it’s a very tight squeeze and getting back there is a feat, having to cram past the second row. Moreover, the battery under the second-row seat takes up quite a bit of space.

In more detail: with the third row budged up there is 60.3 cubic feet of cargo space (impressive) but with that row flipped up there is only 16.9 cubic feet (not impressive) to play around in. Some reviews further report that the power tailgate here is too high and hard to maneuver: not a great first impression for a sports utility vehicle of such robustness.

To conclude, if a sports utility vehicle that delivers the toughness of a truck, adequate towing function and passenger space and the highest safety ranking are not enough selling points, some buyers may want to wait until 2015 when the Chevrolet Tahoe will undergo a complete style overhaul as well.

Features of the Chevrolet Tahoe include:

Some optional features are:

Perhaps the most notable change in the newest Chevy Tahoe is the addition of a Standard Convenience Package for all trims which offers: