2015 Chevrolet Camaro Pros vs Cons. Should You Buy? 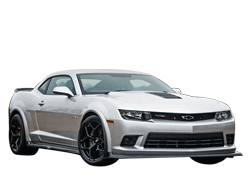 Should You Buy a 2015 Chevrolet Camaro? Here Are Some Reasons For and Against

The Chevrolet Camaro is one of the most recognizable cars in America. Although the Camaro was absent from the car market for a few years, it has certainly made a strong comeback. While some drivers will prefer the efficiency of the V-6 engine, there are others who simply cannot resist the muscular V-8 engine. Despite the fact that the Camaro is a muscle car, it can still be equipped with several luxury features. The legendary coupe’s five-star safety rating makes it an outstanding value.

The Camaro was revised in 2014, so very few changes have been made to the 2015 Chevrolet Camaro. However, Chevrolet does offer a new color called Blue Velvet Metallic.

Top Ten Reasons to Buy a 2015 Chevrolet Camaro - The Pros

Although the Camaro’s retro-futuristic design has been around for a few years, it still causes heads to turn. A set of distinctive headlights and a muscular rear-end give the 2015 Chevrolet Camaro a very commanding road presence. While the base model looks stunning, the upper-level trims really attract a lot of positive attention.

With a total output of 323 horsepower and 278 pound-feet of torque, the 2015 Camaro’s V-6 engine is far from being a weakling. In fact, the engine’s strong performance enables the 2015 Camaro to hustle to 60 miles-per-hour in less than six seconds. However, the use of direct injection technology also helps the Camaro to deliver 30 mpg on the highway.

While the 2015 Chevrolet Camaro is heavier than a traditional sports car, a four-wheel independent suspension setup enables it to deliver superb handling. Even the base model comes standard with 18-inch wheels. When equipped with the optional sports-tuned suspension system, the Camaro sticks to the road like glue. If desired, the Camaro can also be upgraded with a special 1LE Performance package.

As always, the Camaro is available with a powerful V-8 engine. The racy 6.2-liter, V-8 engine pumps out a potent 426 horsepower and 420 pound-feet of torque. In a head-to-head drag race with the 2015 Mustang GT, the Camaro SS proves to be extremely quick. Prospective buyers can choose either an automatic gearbox or a six-speed manual transmission.

The starting price for the 2015 Chevrolet Camaro is about $24,500. In regards to overall value, only a select few cars in this price range offer as much as the Camaro. Even the convertible model is considered to be reasonably priced when compared to the competition. A 100,000-mile warrant certainly helps to sweeten the deal.

6) A lot of Available Features

Chevy offers several high-tech features for the new 2015 chevrolet Camaro. The optional head-up display helps the driver to keep their eyes on the road. Music lovers will definitely appreciate the clarity of the Boston Acoustics sound system. Some of the other neat features include heated seats, a rear-view camera, a seven-inch touch-screen interface, and auto-dimming mirrors. Of course, there are also numerous performance upgrades offered.

The Camaro’s five-star crash test rating helps to reduce the cost of insurance. When equipped with the upgraded brake package, the muscle car comes to a stop in a hurry. The optional parking sensors give the driver an extra degree of confidence when behind the wheel. If wanted, the Camaro can also be equipped with an auto-dimming rear-view mirror.

While the V8-powered SS model is exciting, the race-ready Z/28 model is specially designed for track use. Outfitted with a special suspension system and a 500-horsepower engine, the Z/28 edition can compete with cars that cost $2 million. There is also a super-fast ZL1 model available. The Camaro ZL1 comes standard with a supercharged engine.

Unlike the Dodge Challenger and the Hyundai Genesis coupe, the 2015 Chevy Camaro is available in the form of a convertible. With the touch of a button, the roof begins to descend down into the trunk area. Like the standard version, the convertible is also available with either a V-6 or V-8 engine.

Perhaps the Camaro’s biggest selling point is its fun-to-drive nature. Even the base model has the ability to put a smile on the driver’s face. As soon has the throttle is punched, the 2015 Camaro suddenly comes to life.

Due to the fact that the 2015 Camaro has a small back seat, it may not be the best family vehicle. Most adults will find the rear passenger area to be extremely cramped.

The optional 6.2-liter, V-8 engine is rated at only 17 mpg in the city. While this car gets adequate gas mileage on the highway, long-distance commuters may still desire a more efficient ride.

3) Performs Poor in the Snow

In the event that there is snow on the road, it is a good idea to leave the Camaro parked. As some motorists already know, rear-wheel drive cars tend to perform worse in snowy weather.

In regards to handling, the Camaro trumps the heavier Dodge Challenger. From a styling perspective, the Camaro has a coolness factor that will remain relevant for many years to come. Although the Mustang has been recently redesigned, the Camaro can still hold its own.

The 2015 Chevrolet Camaro is hands-down one of the best-looking sports cars on the road. However, the optional RS appearance package further enhances the car’s profile. While most drivers will opt for the V-6 model, the V-8 models promise to deliver the thrills. The supercharged ZL1 model is especially fast. The coupe’s excellent safety rating is surely a major benefit.