2016 Chevrolet Camaro Pros vs Cons. Should You Buy? 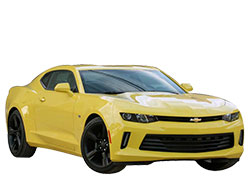 Should You Buy a 2016 Chevrolet Camaro? Here are the Pros and Cons

With the introduction of the 6-generation Chevy Camaro design, GM has tried to do away with the rather cartoonish aspects seen in a 5-gen car. It has toned down and scaled some of those features while maintaining the familiar full sheet metal riffs and hooks.

The 2010-2015 Camaro’s thrifty-looking interior is now part of history. The new 2016 design comes with better materials that have fewer seams as well as a look that is more cohesive, plus a feel that is much more open. This is all thanks to a dash board and console that is lower. A much better cockpit and tighter details have worked wonders for the new 2016 Chevy Camaro.

The 6-generation 2016 Chevrolet Camaro is smarter, lighter, faster, and quieter than all the models coming before it. Now it's better put-together, riding on the underpinning of the Cadillac.

Automotive journalists report that the redesigned 2016 Chevrolet Camaro's cabin is solid in build.

The dash that has been redesigned has moved a notch higher in terms of quality. It's fairly easy to use and intuitive with some sharp graphics.

The 2016 Chevrolet Camaro's screen snappy responses, crispness, and simple graphical layout are simply miles ahead.The Apple CarPlay and Android Auto integration complete the picture, with the Wi-Fi hotspot powered by 4G LTE being the icing on the cake.

The 2016 Chevrolet Camaro, by any historic standard, is an extremely fast car.According to motor vehicle writers, the Chevrolet Camaro’s base engine is smooth, supplying plenty of power.

The new 2016 Chevrolet Camaro is providing the kind of braking and handling that was once the exclusive domain of European higher-end sports sedans and coupes.

Test drivers are very impressed with the V6 and V8 engines, agreeing about their incredible potency. Here you get a car that provides the driving sophistication seen in a European sports-luxury sedan, but at a cost that is considerably less.

This is a very fast car. The higher-horsepower output on top of the lighter new chassis makes all the difference while you are on the road, needing little time in overtaking your competition.The Chevy easily shrugs off any imperfections on the road with casualness, even when it’s not equipped with adjustable suspension.

The 2016 Camaro is covered by a 60,000-mile/5-year powertrain warranty and a 3-year/36,000-mile comprehensive warranty.The new Chevy Camaro has not witnessed any safety recalls from the National Highway Traffic Safety Administration.
Buying Tip: To avoid overpaying on a new car, shop prices online first. Get up front pricing before you walk into a dealership. We recommend the following free services; Car Clearance Deals, NADAguides, CarsDirect & Motortrend.
These free services will offer you the lowest prices and supply you with multiple competing price quotes. You will know the best price before you visit the dealer.

Reasons Not to Buy a 2016 Chevrolet Camaro – The Cons

Although the front seats of the 2016 Camaro are more supportive and comfortable than previously, the dinky backseats would appear to suit contortionists or small children. For you to get a glimpse out of the car, you also need to perform some serious wriggling.

While the car may be completely new, anybody who has driven the previous Camaro coupe generation will notice the familiar large blind spots, small windows, and visibility that is limited.The majority of reviewers will caution you that the large back pillars and small windows of the Chevrolet Camaro create limited outward visibility.

The 2016 Chevrolet Camaro has been judged to have poor trunk space for this class of vehicles, and most auto journalists have pointed out this shortcoming.

4) Not Very Great in Carving Corners

Auto critics are not amenable to calling the Camaro an excellent corner carver. Although it has seen marked improvements from the dynamics of the 5-generation model, the car remains a bulky 3,700-lb. machine. For that, you'd need the help of anti-gravity if you are to make a nimble road-master from this car.

National Highway Traffic Safety Administration or the Insurance Institute for Highway Safety has not yet evaluated this new vehicle. It, however, has all the standard safety features such as:

Being a new car, 2016 Chevrolet Camaro has not yet received crash-test data.

2016 Chevrolet Camaro could be compared with the Ford Mustang or the Mazda MX-5 Miata.

Yes, the new 2016 Chevrolet Camaro looks almost similar to the old one, and its interior still retains some shortcomings. However, the fact is that it's meaner, leaner, and true to its glorious heritage as an emphatic response from Chevrolet to the Mustang from Ford.

• 2018 Chevrolet Camaro trim levels. What you get with each trim configuration.