2016 Chevrolet Cruze Pros vs Cons. Should You Buy? 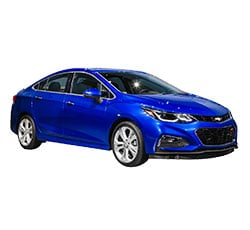 Should You Buy a 2016 Chevrolet Cruze? Here are the Pros and Cons

2016 is an important year for Chevrolet's lineup. This manufacturer has redesigned some of its top sellers, including its Cruze. Since its inception, this car was produced to target buyers under 25 years of age. Traditionally, this segment of people looks for affordably priced vehicles that receive good fuel economy and provide a decent amount of performance and technological features. Thanks to the numerous improvements, this second-generation automobile is sure to grow in popularity and expand its audience.

In 2016, drivers will enjoy a more powerful engine, redesigned interior, and heightened efficiency. With the massive overhaul, the 2016 Chevrolet Cruze is sure to stir excitement in the automotive industry. At a starting price of $17,495, it is an attractive offering.

Over the last few years, great emphasis has been placed on the importance of safety features. Chevy has packed its newest Cruze with the latest technology so that drivers and passengers remain secure on the road. For example, the 2016 model contains 10 airbags, rear-cross traffic alerts, lane departure sensors, and a side-blind zone alert. These are all steps in the direction toward autonomous driving.

Chevrolet introduced a new 1.4 liter Ecotec turbocharged engine into its 2016 Cruze. The direct injection helped raise the car's efficiency and was designed and manufactured to provide class-leading performance and refinement on an international level. It is SAE-certified to provide 153 horsepower. Thanks to the engine's aluminum cylinder block and head, the car's overall mass decreased, which enhanced efficiency as well.

Due to the 250-pound decrease in weight, the 2016 Chevrolet Cruze offers better performance than ever before. Approximately 8 percent of the car's platform is made from hot-shaped steel, which improves rigidity by 27 percent. This lean design makes the vehicle's chassis the "most mass-efficient in the segment." The latest Cruze has an extended wheelbase and wider track, so a driver enjoys nimbler steering, especially around tight turns.

The 2016 Cruze has been revamped to resemble other vehicles in the brand's line, especially the Malibu and the Volt. The new design is approximately two inches longer and one inch lower. Aerodynamics have been improved, which adds to the car's high fuel efficiency. Many people feel the new style appears more aggressive and refined than in the past.

Thanks to the increased exterior size, the inside of the 2016 Cruze provides more legroom for drivers and passengers than in competitor's vehicles. The latest Cruze also includes one of the roomiest rear seats in the class. Even tall adults are comfortably accommodated with the additional leg and foot room.

The 2016 Cruze has been loaded with top technology. The next-gen MyLink infotainment system includes a standard seven-inch screen and allows the driver to integrate smartphones. This car comes with available Apple CarPlay integration and OnStar with a 4G LTE built-in WiFi hotspot.

Unlike the cheap and unappealing interior materials of most small vehicles, the 2016 Chevrolet Cruze has rearranged, reshaped, and upgraded the condition of its cabin. The shifter has been moved forward, the cupholders and storage spaces have been redesigned, and the 4.2-inch high-resolution gauge cluster has been clearly displayed behind the steering wheel. Softer materials have been used throughout, including faux animal-grained surfaces. In higher-end models, optional leather or premium fabric upholsteries are accented with French stitching.

The fuel efficiency of the 2016 Chevrolet Cruze is set to bring it to the next level. It is estimated to receive 40 mph on the highway. Also, it contains standard stop/start technology, which contributes to higher efficiency in everyday city traffic.

Anyone with children appreciates the importance of cargo space. The newest Cruze offers generous trunk capacity at 15 cubic feet. This is very rare for a car in this class and provides solid storage opportunities for such a small vehicle. It helps anyone who cannot afford a crossover or larger SUV.

The 2016 Chevrolet Cruze has a base price of $17,495. Considering its features, this is quite reasonable. There are not many vehicle choices available under $18,000 that afford such style and technology. However, the Cruze provides some high-end features at an exceptionally affordable price.

Reasons Not to Buy a 2016 Chevrolet Cruze – The Cons

Although the 2016 Chevrolet Cruze is impressive, there may be some reasons why you may shy away from buying one.

Even though the 2016 Chevrolet Cruze has heightened horsepower and torque, the acceleration is only average at 0 to 60 mph in eight seconds. Many potential buyers may appreciate more speed.

Although delayed introduction allowed the manufacturer to perfect its changes, the car was not available at the time other car brands unveiled their new models. Anyone looking for a new vehicle at the end of 2015 did not have access to the latest Cruze. There have been delays with the hybrid version as well.

For the budget-minded consumer, the base 2016 Chevy Cruze is a smart option. However, the Premier model with six-speed automatic transmission approaches $24,000. This is extremely close to the brand's Malibu, its mid-sized gem. It may not be worth investing in a top Cruze over the Malibu, which offers more in a higher class.

The Chevy Cruze's major competition is the Mazda 3, Ford Focus, and the Hyundai Elantra. The Cruze offers many attractive technological and safety features alongside its updated interior design. The roomy cabin and trunk seal the deal and make this a top option in the class.

The Cruze has brought great success for Chevy, and the 2016 model is sure to follow suit. The second-generation has improved interior and exterior stylings and an upgraded drivetrain. Buyers will enjoy more power and higher efficiency at an affordable level.

• 2018 Chevrolet Cruze trim levels. What you get with each trim configuration.