2016 Chevrolet Sonic Pros vs Cons. Should You Buy? 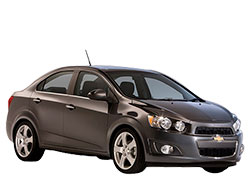 Should You Buy a 2016 Chevrolet Sonic? Here are the Pros and Cons

Sold as either as a hatchback or sedan, the Chevrolet Sonic is a small car. Back in the year 2012, it was introduced as a replacement for the unpopular Aveo. However, even today, there are some places where the Sonic is referred to as the Aveo, even though they are mechanically unrelated.

The Sonic of today is much more attractive, better and safer for buyers. It's doing pretty well and is being sold to a new crop of car buyers whom Chevrolet actually represents. The new 2016 Chevrolet Sonic aims to offer an exotic and daring choice of a car different form the small Japanese cars.

Critics say the 2016 Sonic from Chevrolet has a lovely interior for its class. They note that lots of fresh thinking have been put into the new car for 2016 with useful features that make it attractive and modern.

Reviewers observe that the 2016 Chevrolet Sonic’s base engine supplies adequate acceleration, although many would have preferred the turbocharged version.

Available as both as a hatchback and sedan, the Chevy Sonic offers a cabin that is refined and surprisingly superb driving dynamics.

Most automotive writers point out that the 2016 Chevrolet Sonic offers:

The ride is stable and smooth, and the suspension is sufficiently nimble to round off corners with great confidence or as you dart through city traffic.

The Sonic is being marketed by Chevrolet as being “motorcycle inspired.” The whole concept is driven by a 4-wheeled city bike. All aspects of the 2016 Chevrolet Sonic starting with the instrument cluster all the way to the rear tail lamps and the Borla optional exhaust go towards reinforcing that theme. According to reviewers, the Sonic is capable of zipping to 60 mph from 0 in approximately 8 seconds, making it a fun machine to toss around.

5) Balance between Bold and Conservative

Though not as fresh as during the 2012 introduction, the 2016 Chevrolet Sonic remains modern and steers clear of that boxy, bland "econocar" appearance so beloved of lots of small cars.

The mid-level 2016 Chevrolet Sonic LT model now has got the Chevrolet MyLink system. Other notable features include:

The 2016 Chevrolet Sonic is designed to seat 5. Auto writers have reported that the front seats of Sonic can be counted among some of the most comfortable in this class of subcompact cars.

The 14-cubic-foot trunk of the Chevy Sonic sedan is among the largest you can get in this car segment. This can be expanded further through split-folding the rear seatbacks.The car has lots of handy storage cubbies like the dual glove box arrangement.

The 2016 Chevy Sonic safety offerings are impressive for a car of this size and price segment.

Being comparatively new, there is insufficient data on the reliability of the 2016 Chevrolet Sonic. The 2016 Chevy has not had NHTSA safety recalls.

Reasons Not to Buy a 2016 Chevrolet Sonic – The Cons

1) Some Aspects too Economic

A number of critics have noted that the 2016 Sonic’s cabin contains plenty of hard plastics, which though fairly common in such a vehicle class goes to confirm the car's economy focus.

It has been observed by reviewers that the Chevy Sonic returns in 2016 with what can be considered to be mainly cosmetic changes. Perhaps the sole changes seen in 2016 are:

Bringing in an additional pair of grownups to the Sonic’s rear seats will demand some effort and negotiation if you are to get ample legroom at the back.

Though it is a 2016 model, a digital speedo and an analog tachometer in a monochrome dashboard display that seems like it was taken off a sport bike are some features.

The 2016 Chevrolet Sonic may be compared against the Scion iA and the Honda Fit 2016 models.

As 2016 rolls on, Chevrolet may perhaps be tipping its production focus towards giant SUVs and mini trucks, but safe at the other tip of the production line lies the flourishing subcompact Sonic. Chevy sales are robust, and the Sonic is doing much better than had been expected by anyone.