2017 Chevrolet Camero Pros vs Cons. Should You Buy? 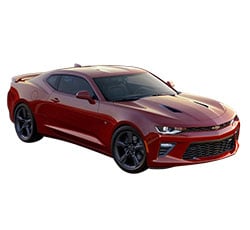 Should You Buy a 2017 Chevrolet Camero? Here Are Some Reasons For and Against

The Chevy Camaro has always been one of the most popular muscle cars on the market. However, the 2017 Camaro has transformed into a legitimate sports car. While the base model is a great value, some drivers won’t be able to resist the SS model’s tire-shredding performance. Although the Camaro is destined to offer a thrilling driving experience, it is still comfortable enough for daily commuting.

The 2017 Chevrolet Camaro can now be equipped with the popular 1LE performance package, which enhances its handling. Chevy also brings the supercharged ZL1 model back to the lineup. To enhance safety for young drivers, the Camaro now provides a Teen Driver mode.

The base power source is now a turbocharged four-cylinder engine. With a total output of 275 horsepower and 295 pound-feet of torque, it will keep most drivers fulfilled. You can choose either a six-speed manual transmission or an eight-speed automatic transmission. Most importantly, you can look forward to getting up to 31 mpg.

If you want to experience a high level of performance without sacrificing much fuel efficiency, the V-6 engine deserves some serious consideration. It pumps out an exciting 335 horsepower while still delivering a solid 28 mpg. A 0-60 time of 5.2 seconds puts the V-6 Camaro among the quickest sports cars in its price range.

When equipped with the V-8 engine, the 2017 Chevrolet Camaro becomes an especially thrilling performance machine. Chevy tuned the iconic LT1 engine to churn out an aggressive 455 horsepower and 455 pound-feet of torque. You can easily hit 60 mph in around 4.0 seconds. Aside from the V-8 engine’s exciting performance, it also gives the Camaro a thunderous exhaust note.

Unlike the muscle cars of yesteryear, the 2017 Chevrolet Camaro offers precise handling. Whether you are cruising down the interstate or taking a sharp curve, you can expect the new Camaro to remain nimble. If you want to hit the track, opt for the new ILE performance package. Some of the upgrades include a track-tuned suspension, performance tires, and stronger Brembo brakes.

The all-new ZL1 model will likely be the fastest Camaro model to ever hit the market. Its supercharged V-8 engine kicks out a staggering 640 horsepower and 640 pound-feet of torque. During trial runs at the race track, the Camaro ZL1 clocked an amazing 0-60 time of 3.5 seconds. Because of the car’s world-class handling, it will be able to compete with exotic sports cars that are far more expensive.

You can expect the new 2017 Chevrolet Camaro to demand a lot of attention on the road. It now looks even more aggressive than the last generation. LED running lights and dual exhaust pipes come standard. Featuring 20-inch alloy wheels and a sleek rear spoiler, the RS package further enhances the Camaro’s sportiness. Some of the available paint colors include Hyper Blue, Red Hot, and Nightfall Gray.

In the past, the Camaro was criticized for having a rather bland interior. Fortunately, Chevy has dramatically improved the Camaro’s interior design. Unique air vents help give the cabin a special appearance. You will also notice the Camaro’s more eye-catching gauge cluster. Although the Camaro does not offer much space in its backseat, even tall drivers can fit comfortably behind the wheel.

Stamped with a five-star safety rating, the new Camaro is among the safest sports cars on the streets. Chevy’s Teen Driver mode gives parents the ability to set a speed limit and track their teenager’s whereabouts. Some of the available driving aids include blind-spot monitoring, rear cross-traffic alert, and lane departure warning. You can also take advantage of the Camaro’s strong braking system.

Although the Camaro is designed to deliver driving excitement, it offers just as much technology as some luxury cars. A 4G Wi-Fi hot spot enables you to access the web at any time of the day. Smartphone users will like the MyLink infotainment system, which comes with Apple CarPlay and Android Auto. Meanwhile, music fans won’t be able to forgo the premium Bose sound system.

Aside from the base engine, all of the other Camaro engines can be fitted with a performance exhaust. This upgrade definitely gives the Camaro an added level of driving excitement. It is a must for the drivers who love the rumble of an old-school muscle car.

Reasons Not to Buy a 2017 Chevrolet Camero – The Cons

Like its predecessor, the 2017 Chevrolet Camaro suffers from poor outward visibility. This could pose a problem for the drivers who like being able to see their surroundings.

2. Does Not Offer Forward Collision Warning

Unlike the Ford Mustang and the Dodge Challenger, the new Camaro fails to offer forward collision warning. This could be a deal breaker for the folks who demand an extra level of awareness on the road.

The 2017 Chevrolet Camaro is definitely not designed to accommodate families. when sitting in the backseat, only very small children will be able to travel in comfort.

Because of its lightweight design, the 2017 Chevrolet Camaro handles better than both the Ford Mustang and the Dodge Challenger. It is also more suitable for the track than the heavy Dodge Challenger. Furthermore, the V-6 Camaro easily outperforms both of these cars in their V-6 form.

It is easy to see why so many drivers love the new 2017 Chevrolet Camaro. They adore its lightning-quick performance and striking appearance. With a starting price of less than $27,000, the Camaro is clearly among the best values in the world of sports cars.