2017 Chevrolet Corvette Pros vs Cons. Should You Buy? 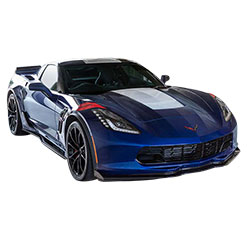 Should You Buy a 2017 Chevrolet Corvette? Here Are Some Reasons For and Against

The 2017 Chevrolet Corvette is one of the most iconic sports cars in history. Drivers will appreciate its dynamic performance and sharp styling. Because of the Corvette's surprisingly good fuel economy, it proves to be a sports car that you can drive everyday. Even the base trim comes loaded with a lot of features. Some of the striking paint colors include Corvette Racing Yellow and Torch Red.

This year, Chevrolet introduces a new Grand Sport performance model. No other major changes were made to the 2017 model.

The 2017 Corvette comes standard with a brutally powerful V-8 engine. Chevy tuned the LT1 engine to develop an exciting 455 horsepower and 460 pound-feet of torque. However, an optional high-performance exhaust tacks on an additional five horsepower. When launched from a standstill, the American speedster takes only 3.9 seconds to reach 60 mph.

A lot of drivers will be impressed by this sports car’s fuel economy. While the Chevrolet Corvette does not deliver great gas mileage in the city, it is rated to return a frugal 26 mpg on the highway. However, some drivers report even better efficiency in the real world.

When it comes to handling, the Chevrolet Corvette can compete with the best sports cars on the market. If you desire even better control, opt for the popular Z51 performance package. Upgraded tires and a more aggressive suspension help the car to remain firmly planted to the road. An electronic limited-slip differential also comes with the Z51 package.

The all-new 2017 Grand Sport model comes ready to hit the track. It is loaded with a number of upgraded components. A more durable cooling system helps keep the engine cool at all times. Meanwhile, adaptive suspension dampers enhance the car’s agility. Some of the other enhancements include larger brakes and wider performance tires.

When behind the wheel of the 2017 Corvette, you will enjoy its relaxing atmosphere. The standard seats provide just the right amount of cushioning and support. While some drivers will take the sports car to track, it is also an excellent vehicle for taking out-of-town trips. A large trunk further highlights the Corvette's versatility.

The 2017 Chevrolet Corvette will attract a lot of attention on the road. It comes standard with quad exhaust tips and a vented hood. Wide tires accentuate the car’s aggressive stance. Meanwhile, special graphics and a larger rear spoiler help separate the Grand Sport model from the other trims. You can also upgrade the new Corvette with carbon fiber trim and a transparent roof.

An available Performance Data Recorder transforms the 2017 Chevrolet Corvette into an even more exciting ride. The cutting-edge system provides real-time performance statistics, which is destined to excite a lot of drivers. You can also use the system to record your driving experience. Meanwhile, the Valet mode gives you more security when allowing others to get behind the wheel.

In the land of high-performance sports cars, the new Chevrolet Corvette proves to be a steal. When tested on the track, it outperformed exotic cars that were far more expensive. Furthermore, the Corvette has a reputation from being quite dependable. Prices start at around $56,000 for the base model. The Grand Sport version costs an additional $10,000, which is still a good bargain.

Unlike some of its key competitors, the 2017 Chevrolet Corvette comes standard with a 4G Wi-Fi hot spot. To keep smartphone users happy, Chevrolet now includes Apple CarPlay and Android Auto as standard items. While cruising along the highway, you can turn up the volume on the powerful Bose audio system. The other standard items include leather upholstery, an 8.0-inch touch-screen display, and a rear-view camera.

A high-performance Brembo braking system comes standard on the 2017 Chevrolet Corvette. However, the Z51 package’s larger brake calipers provide even more stopping power. It recorded one of the best braking performances in the segment.

Reasons Not to Buy a 2017 Chevrolet Corvette – The Cons

1) Could Be Beyond Your Budget

Most people agree that the 2017 Corvette is a fantastic value. Nevertheless, its $56,000 price tag may still be a bit too expensive for some people. Both the 2017 Mazda Miata and the new Toyota FR-S have a starting price of less than $30,000. However, you will be forced to give up a bit of performance.

As usual, the new Chevrolet Corvette features a rear-wheel-drive system. While the RWD system is impressive, it will not perform well in snowy weather. If you want to drive throughout the year, you will need to look at a sports car such as the Audi TTS or Nissan GTR.

Although the 2017 Chevrolet Corvette is a highly rated automobile, it still lacks the refinement of a German sports car such as the Porsche 911.

If you are looking for a thrilling sports car that can compete with the world's elite, the 2017 Chevrolet Corvette remains a worthy option. By introducing the track-ready Grand Sport model, Chevrolet made the Corvette an even better option for sports car shoppers. Whether you are having fun on the track or taking a weekend road trip, the 2017 Corvette should remain comfy.