2017 Chevrolet Trax Pros vs Cons. Should You Buy? 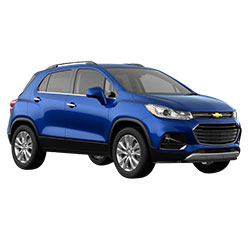 Should You Buy a 2017 Chevrolet Trax? Here Are Some Reasons For and Against

Although the Chevrolet Trax is not the biggest SUV on the market, it still provides just the right amount of room for most families. The compact crossover’s affordability and feature-packed interior make it a great buy. Everyone can take advantage of the Trax’s excellent crash protection.

For the 2017 model year, the Chevrolet Trax now comes standard with smartphone technologies such as Apple CarPlay. New safety features have arrived as well, including Forward Collision Alert. To further enhance the crossover's appearance, Chevrolet decided to install new front and rear fascias.

The 2017 Trax only weighs around 3,000 pounds, which helps it to deliver better fuel economy than a larger SUV. According to the EPA, you can expect to get an economical 25 mpg in the city and 33 on the interstate. However, the heavier AWD models top out at 30 mpg.

With a total output of 138 horsepower and 148 foot-pounds of torque, the crossover’s boosted four-cylinder engine is strong enough for most people. If you need to surge past a slow-moving vehicle on the highway, the Trax should deliver the necessary performance. It recorded a competitive 0-60 time of 8.7 seconds.

If you feel intimated by the size of a big SUV, the 2017 Trax may prove to be the perfect alternative. You will experience an extra sense of control on the road. Because of the crossover’s small size, it is far easier to park in crowded areas. This is a big advantage for the drivers who live in a busy city.

A front-wheel-drive system comes standard on the Chevrolet Trax. However, all-wheel drive gives you an advantage in snowy weather. The crossover’s AWD system automatically detects a loss of traction, which is a major convenience for the driver. You can also take advantage of the SUV’s 6.2 inches of ground clearance.

While the 2017 Chevrolet Trax may have a compact design, it still proves to be a serviceable family vehicle. The crossover’s high roof provides tall drivers with extra headroom. There is also a commendable amount of legroom for your backseat passengers. When making trips to the supermarket, the Trax’s nearly 18 cubic feet of cargo space will come in handy.

For the drivers who don’t have a lot of extra money to spend, the base LS model is an attractive option. Its MSRP stands at $22,000, which is a great deal considering the crossover’s impressive list of equipment. All-wheel drive tacks on an extra $1,500. Meanwhile, a fully loaded Premier model demands nearly $27,000.

8) An Abundance of Standard Features

Chevrolet packed the base 2017 Chevrolet Trax with a lot of cool goodies. The crossover’s 4G Wi-Fi hot spot is a feature not offered by most of its competition. Chevy’s updated Mylink infotainment now includes Apple CarPlay and Android Auto. Some of the other standard items consist of a rear-view camera, a 7.0-inch touch-screen display, and Bluetooth technology.

With so many standard features on board, a lot of drivers will be more than satisfied with the base model. Nevertheless, options such as the heated seats will definitely give you more comfort. A seven-speaker Bose sound system makes the Chevrolet Trax a more entertaining daily-driver. Some of the other options include satellite radio, a sunroof and remote engine start.

The 2017 Chevrolet Trax earned a fine, five-star safety rating. GM’s highly regarded OnStar system comes standard, which provides 24-hour roadside assistance. You can also choose from even more safety technologies. Forward Collision Alert helps keep drivers focused at all times. Blind-spot monitoring and lane departure warning are also offered.
Buying Tip: To avoid overpaying on a new car, shop prices online first. Get up front pricing before you walk into a dealership. We recommend the following free services; Car Clearance Deals,   Edmunds,   CarsDirect,   NADAguides  &  Motortrend. These free services will offer you the lowest prices and supply you with multiple competing price quotes. You will know the best price before you visit the dealer.

Reasons Not to Buy a 2017 Chevrolet Trax – The Cons

Don't expect the crossover's ride quality to wow you. Its ride becomes a bit rough on uneven pavement. If you tend to take a lot of out-of-town trips, you may prefer a crossover that has a softer suspension.

When behind the wheel of the 2017 Chevrolet Trax, you will not experience a great deal of sportiness. Its steering system does not provide quite enough road feedback. Although this issue may not concern some drivers, rivals such as the Nissan Juke feature a more responsive steering system.

Chevrolet does not offer an optional engine upgrade for the 2017 model. While the crossover's turbocharged engine feels lively, it lacks the punch of a more potent engine. Both the Kia Soul and the Kia Sportage offer a stronger engine.

The 2017 Chevrolet Trax certainly deserves a serious look. By loading the crossover with so many standard features, Chevrolet was able to take its appeal to the next level. When hauling their children around, the Trax's solid crash protection will give parents an additional sense of security. Meanwhile, the SUV's athletic styling is yet another one of its best qualities.