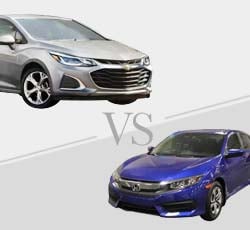 For years, the Honda Civic has remained one of the best-selling compacts cars in North America. While the 2019 Honda Civic is a great choice, it faces some stiff competition for the 2019 Chevrolet Cruze. Many people will love the Cruze’s affordability and great standard features. After comparing these two compact sedans, we will attempt to crown a winner.

Drivers who don’t demand a high level of performance will be completely satisfied with the Civic’s base four-cylinder engine. It develops a solid 158 horsepower. Civic fans can also choose to upgrade to turbocharged four-cylinder engine. Models equipped with a manual transmission push out 180 hp and 177 lb-ft of torque. Getting the Civic’s automatic CVT transmission slightly decreases total output.

Atop the Civic sedan’s lineup sits the performance-focused Si trim. Although the Civic Si features a similar turbocharged engine, special tuning helps it to crank out 205 horsepower and 192 pound-feet of torque. Remember, this trim is only available with a manual transmission.

A small 1.4-liter, turbocharged four-cylinder engine comes standard on the 2019 Chevrolet Cruze. It packs 153 horsepower and a significant 177 pound-feet of torque. Folks looking to spend less money on fuel will be interested in the Cruze’s diesel engine, which develops 137 hp and 240 lb-ft of torque.

The 2019 Honda Civic is quick for a compact sedan. Models equipped with the mid-level turbo engine can hit 60 mph in 7.0 seconds. Meanwhile, testers have recorded the Civic Si with a 0-60 time of 6.6 seconds. While the standard Chevrolet Cruze takes 7.7 seconds to reach 60 mph, expect the Cruze Diesel to hit the mark in roughly 8.6 seconds.

Sadly, the Chevrolet Cruze no longer offers a traditional manual transmission. This will disappoint drivers who favor changing their own gears. Meanwhile, Honda still offers the Civic with one of the best manual gearboxes in the segment. Both sedans offer a well-designed automatic CVT.

Front-wheel drive is standard on both cars. With all-wheel drive being unavailable, car shoppers living in snow-prone areas may have to search for another model. Nonetheless, expect these sedans to perform well in rainy conditions.

Rated to return a combined 36 mpg, the Honda Civic is definitely an efficient performer. Even the high-performance Civic Si can easily deliver more than 35 on the open road. Drivers will also enjoy the Chevy Cruze’s fuel economy. While the base engine is estimated to return a combined 33 mpg, the Cruze Diesel really blows away the competition. Owners can look forward to getting up to 48 mpg.

In the past, the Honda Civic was among the most reliable cars in the class. However, that is no longer the case. According to the latest J.D. Power Dependability Study, reliability is now below average for the Civic. It scores a 2.5 rating out of 5.0. Meanwhile, the Chevrolet Cruze has one of the highest predicted reliability ratings in the segment.

There’s little difference in the warranty coverage between these sedans. Both allow you to drive off the lot with a 60,000-mile powertrain warranty.

Like so many of the other cars in the class, the 2019 Chevrolet Cruze is easy to drive. Its responsive transmission allows you to smoothly accelerate from one traffic light to the next. You’ll also enjoy the 2019 Honda Civic’s easy operation. Both cars have a sharp turning radius, which makes low-speed maneuvers easier.

Drivers praise the Honda Civic for its responsive handling. It rips around curves with a great deal of poise. A well-tuned steering system further aids the Civic’s drivability. A sport suspension and performance tires are found on the fun-to-drive Civic Si.

Although the Chevrolet Cruze may not offer a high-performance trim like the Civic Si, it still scores very well in the handling department. A low center of gravity helps the Cruze to remain balanced on curvy roads. Most people will describe the Cruze as being quite sporty. An upgraded set of 18-inch tires are available, which gives the Cruze more grip around corners. Chevy also equips the range-topping Cruze Premier with an upgraded rear suspension.

Virtually every big-name car reviewer gives the Chevy Cruze top marks for its plush ride. It can easily compete with many of today’s entry-level luxury sedans. With that said, the Honda Civic also has an impressive ride quality. These compact sedans come ready to hit the highway.

The Honda Civic provides a confident driving position. Visibility is also good. When looking in their rearview mirror, drivers should be able to quickly spot oncoming vehicles. A supportive driver’s seat makes the new Civic even more rewarding.

Some people will find the Chevrolet Cruze’s driver’s seat to be a bit too narrow. However, most people will have no complaints. While a low hood helps the Cruze to offer great visibility from the front, visibility out the rear window is not quite as good.

Front-seat legroom is virtually the same. However, rear passengers in the Civic will have around 1.3 more inches of legroom. This may interest drivers who have a growing family. Although the Civic’s trunk is a tad bigger, most people will not notice a difference when loading shopping bags. However, Cruze trims equipped with a space tire do sacrifice some cargo space.

Like its counterpart, the Chevrolet Cruze has a well-built interior. There’s not a lot of noise heard from the driver’s seat. Interior materials also have a quality look and feel.

This year, Chevy has updated the Cruze with an all-new infotainment system. Sharp graphics enable drivers to easily read the screen. Honda’s updated infotainment system also brings a lot to the table. New controls make it simpler to operate than before.

Drivers can feel confident while behind the wheel of these compact cars. They both managed to grab an NHTSA five-star overall safety rating. Families will be well protected during a sudden crash. However, the 2019 Honda Civic received a perfect score in more crash categories.

Chevy does not quip the Cruze with any standard accident-avoidance features. To get low-speed automatic emergency braking and lane-keep assist, you must purchase the range-topping Premier trim’s optional Driver Confidence II package. Fortunately, the Cruze does offer a true blind-spot monitoring system. Honda’s LaneWatch blind-spot camera doesn’t work as well in the real world.

Every new Cruze also comes standard with an award-winning Onstar emergency responsive system. When in trouble, drivers can simply press a button. A live emergency respondent will then assist. Automatic crash notification is included as well.

Teen Driver technology is only found on the new Cruze. Aside from restricting teens from driving over a set speed limit, this system can compile a driving report card. Parents can have the results sent directly to their mobile phone. The extra peace of mind will be greatly appreciated.

While the Honda Civic deserves a lot of credit for its standard Honda Sensing safety package, its forward collision warning system is too sensitive. When traveling on a crowded street, the system can trigger false alarms.

Chevy has priced the base Cruze L at less than $18,000. This starting MSRP puts the 2019 Chevrolet Cruze among the best values in America. However, the 2019 Honda Civic is also well worth its starting MSRP of $19,550.

Although the Cruze does not come standard with an advanced safety package, this should not turn buyers away. Its list of standard equipment is very impressive. No other car in the class provides a standard 4G Wi-Fi hotspot, which allows every passenger to surf the internet at high speeds. Chevy also equips the Cruze with its all-new Infotainment 3 interface. It has a high-resolution touchscreen with smartphone integration technologies like Apple CarPlay and Android Auto. Remote locking and unlocking sweeten the deal.

Aside from a standard Honda Sensing package, the base Civic LX does not have any real advantages over the base Cruze. It lacks a touchscreen with advanced smartphone support. Buyers will also miss out on remote locking and high-speed Wi-Fi.

Let’s now take a look at the Cruze Premier and the Civic Touring. These models are designed to offer a more luxurious ride. While prices for the Cruze Premier start at $23,520, the Civic Touring starts at nearly $27,000. Car shoppers will obviously save more money by choosing the Civic Premier. Its optional advanced safety package is only $720. Unfortunately, Chevy also charges extra for a sunroof and a Bose sound system.

Neither car should be expensive to maintain. All of the key replacements parts are affordable. Furthermore, both offer good gas mileage.

Let’s first look back at the big categories. In terms of overall driving fun, the 2019 Honda Civic takes the lead. Unlike the 2019 Chevrolet Cruze, it has a performance-focused Si trim. Furthermore, a manual gearbox is still offered. However, don’t overlook the Cruze’s ability to keep drivers inspired. Handling and ride comfort are very good. Acceleration with the base engine is also quick enough to satisfy most people.

Great fuel economy is a quality that both of these sedans share. Drivers will be able to travel without worrying about spending a lot of money on fuel. Rated to deliver almost 50 mpg on the highway, the Cruze Diesel is especially great for road tripping.

With both cars offer affordability, the Chevy Cruze is cheaper. It also has a higher predicted reliability rating. Like the Honda Civic, the Chevrolet Cruze can be used to haul around your family. However, a bigger backseat gives the Civic a slight edge.

The Cruze is a good-looking car. While the base Cruze will likely get lost in the crowd, upper trims stand out. A racy RS appearance package is optional, which enhances the sedan’s aggressiveness with larger 18-inch alloy wheels and a sport body kit. Some drivers will also like the Civic’s sleek profile. Its new front bumper certainly looks better than before.

This comparison of the 2019 Honda Civic and the 2019 Chevrolet Cruze is a very close call. In fact, it's a photo finish. Drivers who are more focused on performance should pick the Civic without any hesitation. It’s also the only model that comes standard with an advanced safety package.

On the other hand, the Chevrolet Cruze packs an exciting list of in-vehicle technologies and now offers superior reliability. We think car shoppers will be happy with either of these fine compact sedans.

Save Money on a 2019 Chevrolet Cruze:
Are you Shopping for a New Vehicle? Find the Best Deals with "Free - No Hassle" Prices Quotes.