2019 Chevrolet Volt Pros vs Cons. Should You Buy? 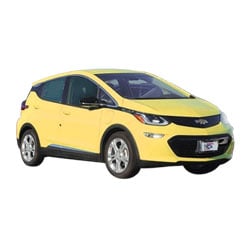 Should You Buy a 2019 Chevrolet Volt? Here Are Some Reasons For and Against

This model year brings another round of Chevy's second generation of its plug-in hybrid, the Volt. The 2019 Chevrolet Volt is impressive for the sheer fact that it has 53 miles of pure electric range, but there is more to this vehicle than just that. The Chevy Volt might be small, but it handles, accelerates, and brakes just as well - if not better than - quite a few of its plug-in hybrid and regular, gasoline-powered competitors. With a cool new infotainment system and optional 7.2-kWh on-board charger, the Volt is one of the most exciting vehicles in its class this year.

A few significant changes have been made to the 2019 Chevrolet Volt. First and foremost, the infotainment system has been revamped, and a new high-definition rear-view camera has been swapped in for the previous camera. Additionally, Chevy has inserted a 7.2-kHw on-board charger into its list of optional features for the Volt. There is also power adjustment now available for the driver's seat.

The 2019 Chevrolet Volt outdoes most of its competition in terms of its electric range. The Volt can travel for 53 miles on pure electricity before it needs to switch over to gasoline. For most daily drivers, 53 miles covers their commutes. This will keep drivers from having to spend a lot of money at the fuel pump and leaves a far smaller carbon footprint than other vehicles.

Many plug-in hybrid vehicles do not have the best acceleration, but the new Chevy Volt is surprisingly spunky when it comes to take-off. The Volt can get from 0 to 60 mph in roughly 7.8 seconds on pure electricity and 7.5 seconds when powered by gasoline. Regardless of which mode you have the Volt in, the powertrain makes acceleration feel smooth and effortless.

3. Brakes Are Easy to Modulate

Braking on the 2019 Chevrolet Volt is delightfully secure, and switching between the regular and regenerative brakes is absolutely seamless. In fact, you might not even notice the change. The Volt can also make a safe panic stop in a distance of just about 119 feet, which is quite good for its class.

Handling on the Chevy Volt is surprisingly precise for a vehicle in its class. While the tires are geared for economy and not wild driving antics, the Volt can handle twisting roadways with ease. Overall, the spunk and lightness the Volt displays gives it some best-in-class handling capabilities. It possesses a level of coordination rarely seen in plug-in hybrids.

In the past, the Chevy Volt struggled with keeping engine noise out of the cabin while running on gasoline. That problem has been sussed out on the 2019 Chevrolet Volt. The cabin maintains a hushed atmosphere regardless of whether you have the vehicle in electric or gasoline mode. The only thing you might hear if you pay close attention is a gentle humming of wind and road noise. It is certainly nothing intrusive.

6. Most Controls Are Easy to Use

Most of the controls that you will find on the new Chevy Volt are easy to use, unlike what you will find in quite a few of its competitors. Although using climate control has a small learning curve, many drivers will quickly master that and the infotainment system's menus. There are enough physical knobs and buttons for non-tech savvy drivers to feel right at home inside of the cockpit.

Using the touchscreen interface on the 2019 Chevrolet Volt is remarkably easy to do. An 8-inch touchscreen comes standard on every trim level, and the menus are straightforward. The graphics are easy to read and intuitively placed. There is no hassle in linking up Bluetooth, and smartphone app integration via Apple CarPlay and Android Auto does not take long to learn.

Chevy equips the new Volt line-up with a sizable list of standard driver aids. Included on the Volt are forward collision warning with rear cross-traffic alert, lane departure intervention, blind-spot monitoring, and an optional automated parking system. On Star technology is also included, and this provides remote locking and unlocking for the doors as well as emergency assistance services.

Voice control systems are something that many auto manufacturers are still striving to master. Chevy, however, seems to have refined their system. The voice control system on the 2019 Chevrolet Volt is surprisingly adept at responding appropriately to commands issued by the driver. If you want to use your smartphone's voice control, you can activate Google Voice or Siri by holding the voice button down for a few extra seconds.

A major bonus to owning the Chevy Volt is that it is constantly being hailed as one of the safest vehicles in its class. This model year, the National Highway Transportation Safety Administration (NHTSA) has assigned the Volt an overall rating of five out of five stars. The Volt received five out of five stars on all but one of its tests; the only mark down was a four-star score on the Frontal Barrier Crash for the passenger side. There was only a 9.3 percent risk of roll-over and no noticeable tip. Additionally, the Insurance Institute of Highway Safety (IIHS) gave the 2019 Volt "good" marks on all of its tests.

Reasons Not to Buy a 2019 Chevrolet Volt – The Cons

One of the biggest drawbacks to driving a vehicle in this class is that the rear seat is typically pretty small. Unfortunately, the rear seat on the 2019 Chevrolet Volt is even smaller than some of its competitors. While it can accommodate two adults, taller passengers will probably feel a bit crammed in. Thankfully, there is still plenty of room up front for the driver and front seat passenger to enjoy; they just will not want to put their seats too far back unless they want to infringe on rear seat space for other passengers.

Similarly to the rear seat space issue, the Chevy Volt does not offer much in the way of cargo space. With the rear seats in place, the Volt only has 10.6 cubic feet of cargo space. This simply is not enough to accommodate several weeks' worth of groceries or a few bulky pieces of sports equipment. Sorry, golfers, but you will have to fit multiple golf bags into the rear seat instead of putting them in the cargo area. Also, the sedan version of the Chevy Volt does not offer as big of a loading areas as the hatchback version does.

3. Hard to See the Front End

Seeing the front end of your vehicle is important while trying to park or follow behind another vehicle. Sadly, there is some guesswork involved when you are behind the wheel of the 2019 Chevrolet Volt. Since the height adjuster on the driver's seat does not have a very broad range, trying to find the right position to see as far down the nose as possible can prove to be somewhat tricky. The Volt's nose simply drops too far down for comfort.

The cabin of the Volt is certainly not an eyesore, but some of the materials come off as being low-brow for a new vehicle. There are a lot of hard plastics, including the plastic chrome trim, which should look anything but tacky but manages to do so. Overall, the cabin looks merely average and does not really catch the eye as well as it should.

Although the 2019 Chevrolet Volt is the plug-in hybrid to beat this model year, the 2019 Honda Clarity is giving it a run for its money. The Clarity has only been around since 2017 but is making a lasting impression with its cozy cabin, comfy ride quality, and excellent performance as a daily driver. The Clarity comes as either a plug-in hybrid and a fully electric model. The biggest drawback on the Clarity is that the plug-in is the only version that does not have limited availability. Also, the Clarity could use a few improvements to its touchscreen interface.

Another top contender in the plug-in hybrid class this year is the 2019 Toyota Prius Prime. This version of the ever-popular Prius gets a good fuel economy and keeps pace with the Volt in terms of EV range. It is a competitively priced vehicle with a comfortable cabin, but it, like the Volt, suffers from a small cargo area. The Prius Prime also lacks the Volt's stellar acceleration and hushed interior.

There is little doubt to be had that the 2019 Chevrolet Volt will prove to be a popular seller in its class. Although quite a few strong competitors have entered the arena this model year, the Volt holds on with its compliant ride quality, enjoyable driving performance, comfort, and impressive fuel economy. Most of the issues that the Volt has can be overlooked, and many of those who are looking to buy a vehicle like this will already expect space to be limited.

Save Money on a 2019 Chevrolet Volt:
Are you Shopping for a New Vehicle? Find the Best Deals with "Free - No Hassle" Prices Quotes.