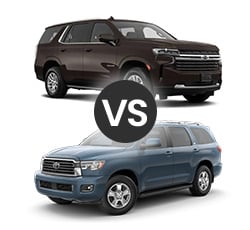 Full-size SUVs are perfect for drivers who need extra passenger room and more muscle for towing. The redesigned 2021 Chevrolet Tahoe remains the best-selling vehicle in the class. Much-improved driving dynamics and an updated interior design make the latest model especially appealing. Another great option is the 2021 Toyota Sequoia, which tops the segment in reliability. Let’s find out which one of these truck-based SUVs is the better choice.

All versions of the 2021 Toyota Sequoia come equipped with the same 5.7L V8 engine. It’s rated by Toyota to push out 381 hp and 401 lb-ft of torque. Power is fed to the wheels via a six-speed automatic gearbox. While the Sequoia’s automatic transmission has a history of being durable, it can be a bit clunky at times. The Tahoe’s new 10-speed automatic performs better. When pulling a load and climbing hills, it quickly shifts down to the ideal gear.

In terms of towing capabilities, the Tahoe outperforms the Sequoia. While the Tahoe can tow up to 8,400 pounds, Toyota lists the Sequoia with a 7,100-pound maximum tow rating. Chevy also offers the Tahoe with a greater number of advanced towing features. Chevy’s optional camera system allows drivers to see up to nine different views when pulling a trailer. A hitch guidance system also makes it easier for Tahoe drivers to connect a trailer.

The edge in fuel economy easily goes to the Chevrolet Tahoe. It comes standard with cylinder deactivation technology, which helps save fuel on the open road. Trims equipped with the base engine can return up to an EPA-calculated 16 mpg city/20 mpg freeway. City fuel economy only dips slightly with the larger 6.2L engine. However, opting for the Tahoe’s diesel engine dramatically increases efficiency to an impressive 21 mpg town/28 mpg freeway.

The Toyota Sequoia ranks near the bottom of the class in fuel economy. Drivers can anticipate getting around 13 mpg town/17mpg freeway. This is obviously not the best vehicle for city commuting. Luckily, drivers won’t need to spend money on premium fuel. Toyota designed the SUV’s engine to operate on regular unleaded gas. Chevy recommends the use of premium gasoline for the Tahoe’s optional 6.2L engine.

On the road, the Tahoe quickly showcases its improved driving dynamics. A new independent rear suspension gives this SUV a far more agile feel than before. No longer does the Tahoe feel clumsy on twisty roads. A Magnetic Ride Control system is optional. It transforms the Tahoe into an even more poised driving machine.

Unfortunately, the Sequoia doesn’t drive as well as the new Tahoe. Drivers will feel the Sequoia’s massive weight when cornering. On the bright side, light steering makes the Sequoia relatively easy to maneuver in small spaces. Toyota also equips the Sequoia’s TRD Sport trim with sports-tuned shocks. This upgrade does enhance the SUV’s overall handling characteristics on the road.

These truck-based SUVs are evenly matched in terms of off-road capabilities. The Tahoe’s Z71 trim comes equipped with features that help drivers to face rough terrain. Among these rugged upgrades are a front skid plate, a trail-ready suspension, and hill descent control. Similar features are found on the Sequoia TRD Pro.

Car reviewers give the Tahoe’s standard braking system a good rating. When braking at 60 mph, it takes roughly 123 feet for the Tahoe to come to a complete halt. However, buyers can upgrade to a high-performance Brembo brake kit for a little more than $2,000. While the Sequoia’s brakes are effective, it does take a few more feet for the SUV to stop.

Over the years, the Sequoia has remained one of the segment’s most reliable models. Its four out of five reliability rating is impressive. Nonetheless, J.D. Power expects the new Tahoe to be even more dependable. It receives a perfect five-star rating in predicted reliability.

These SUVs have a similar warranty package. They both receive a 60,000-mile powertrain warranty. A 36,000-mile bumper-to-bumper warranty is included as well. However, ToyotaCare’s no-cost maintenance plan does help Sequoia owners to save more money. It covers important services, such as oil changes and multi-point inspections, for up to 25,000 miles.

According to some automotive journalists, the 2021 Chevrolet Tahoe’s ride quality has improved. This can be contributed to the SUV’s new platform and more modern suspension. However, it does not ride as smooth as a car-based crossover. Passengers will still experience a bit of bumpiness on uneven roads.

The 2021 Toyota Sequoia has a decent ride quality. Like the Tahoe, it offers an adjustable air suspension for enhanced comfort. Expect the off-road-ready Sequoia TRD Pro to ride a bit rougher.

Chevy transformed the new Tahoe into a quieter SUV. Its cabin does a good job of suppressing wind and road noise. Although you can hear the growl of the Tahoe’s V8 engine, it’s far from an unpleasant sound. The Sequoia is also mostly quiet on the inside. This is especially true for the Sequoia’s more luxurious trim levels.

Both of these SUVs are built to accommodate large families. Like its competitors, the Toyota Sequoia can handle up to eight passengers. While the Sequoia is definitely spacious enough for most people, families will find the new Tahoe to be even roomier. Second-row passengers will have an extra 1.1 inches of legroom. Aside from providing more front-seat legroom, the Tahoe also rewards its third-row occupants will an additional 1.7 inches of legroom.

These SUVs are a close match in terms of overall seat comfort. Test drivers applaud the Sequoia for its wide and cushy seats. While the Tahoe matches the Tahoe in front-seat comfort, its rear seats feel a bit firmer.

Drivers who need to store a lot of stuff will be happier with the Tahoe. There’s more than 25 cubic feet of cargo space behind its third row. By comparison, the Sequoia provides almost 19 cubic feet of storage space. Both SUVs feature folding rear seats, which further expand the available storage space.

Although the Sequoia’s infotainment system is also easy to operate, it’s a bit more dated. The 7.0-inch touchscreen is significantly smaller. Graphics are also not the best in terms of sharpness. With that said, there aren't any other big drawbacks to the system. Amazon Alexa, which enables users to access their smartphone’s functions using verbal commands, is only found on the Sequoia.

Only the Tahoe offers a digital gauge cluster. This upgrade allows drivers to access more information while behind the wheel. Another exclusive feature is the Tahoe’s color head-up display.

Fortunately, Chevy has updated the Tahoe with a greater number of standard safety features. Among the highlights include forward automatic emergency braking, rear parking alert, and a Following Distance Indicator. Parents who allow their teenagers to get behind the wheel will appreciate Chevy’s standard Teen Driver system. Aside from allowing parents to program a speed limit, it can also compile a useful driving report card.

A collection of driving aids called Toyota Safety Sense comes standard on the Sequoia. It provides a few extra features, including blind-spot warning and lane departure warning. Toyota does not offer this SUV with a teen driver monitoring system.

Prices for the 2021 Chevrolet Tahoe start at $49,000. Meanwhile, the 2021 Toyota Sequoia has a listed starting MSRP of $50,100. While the Tahoe has a lower MSRP, Toyota does provide 25,000 miles of no-cost maintenance for the Sequoia. Both of these are loaded with highly desirable features. Among the key highlights include a touch display with advanced smartphone support, onboard Wi-Fi, and tri-zone automatic climate control.

There’s much to like about the 2021 Toyota Tundra. It’s a dependable, spacious, and strong up to tow a reasonably heavy load. However, the Tundra is a step behind the 2021 Chevrolet Tahoe is some important areas.

Fuel economy is a big factor to consider. Tahoe owners won’t have to spend quite as much money at the pump. While the Sequoia’s performance is more than adequate, expect the Tahoe’s optional 420-horsepower engine to be especially strong. Of course, some drivers will want the Tahoe’s fuel-efficient diesel engine. Although both of these SUVs are rugged enough to go off-road, the Tahoe’s offers a better driving experience on the street.

In regard to technology, the Tahoe yet again comes out on top. Chevy’s revamped infotainment system provides a much larger display and wireless smartphone connectivity. Other exclusive Tahoe features include a big head-up display, a digital gauge cluster, and rear automatic emergency braking.

The Tahoe’s new and improved interior has impressed a lot of people. Hard plastics and an aging interior design make the Sequoia’s cabin feel less luxurious. There’s also a more passenger and cargo space inside the redesigned Tahoe.

Save Money on a 2021 Chevrolet Tahoe:
Are you Shopping for a New Vehicle? Find the Best Deals with "Free - No Hassle" Prices Quotes.