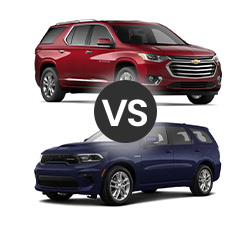 2021 Traverse vs Durango - How do they stack up? Which is Better?

Three-row SUVs have grown in popularity over the last decade. The 2021 Chevrolet Traverse ranks among the best models in the segment. Families especially love its relaxing accommodations. Another great option is the 2021 Dodge Durango. When it comes to sheer performance, no other vehicle in the class rivals the Durango. In this head-to-head clash, we’ll find out which one of these SUVs is the better choice.

Every new 2021 Chevrolet Traverse comes equipped with the same powertrain. A 3.6-liter, V6 engine gives the Traverse plenty of muscle for everyday tasks. It's rated by Chevy to crank out 310 horsepower and 266-lb-ft of torque. Mated to the engine is a nine-speed automatic transmission.

Expect the Durango’s base V6 engine to offer a similar level of performance. It develops a satisfactory 293 horsepower and 260 lb-ft of torque. An eight-speed automatic transmission is found on all Durango trims. While the Traverse can clock 0-60 mph time 6.7 seconds, the noticeably heavier Durango takes around 7.4 seconds to reach 60 mph.

New for 2021 is the electrifying Durango SRT Hellcat. Its supercharged Hemi V8 engine unleashes a best-in-class 710 horsepower and 645 lb-ft of torque. Road tests show that this beast can record a 0-60 mph time of roughly 3.6 seconds. Few three-row SUVs in the world can accelerate as quickly.

The Dodge Durango is capable of delivering more overall driving fun. Aside from offering some monstrous V8 engines, SRT Durango models also come equipped with an active exhaust system. This upgrade gives the SUV the soundtrack of a true muscle truck.

In terms of handling, the Chevrolet Traverse impresses with its composed road manners. Although the Traverse isn’t the sportiest SUV in the class, it’s stable and remarkably easy to drive. While the V6 Durango trims handle well enough for the average driver, an adaptive suspension system and a specialized AWD system are featured on the high-performance Durango SRT trims. These upgraded performance goodies make the Durango feel noticeably more athletic on twisty roads.

As expected, both of these SUVs can be equipped with an AWD system. However, the Durango R/T’s 4X4 system includes a two-speed transfer case. This feature further optimizes traction on muddy off-road trails. Adventure seekers can also take advantage of the Durango’s extra ground clearance.

When it comes to towing capabilities, the Durango wins this category. Even the V6-equipped Durango is rated to handle up to a 6,200-pound load. However, high-output SRT Durango models can confidently tow more than 8,500 pounds. This puts the Durango right in line with many of today’s light-duty pickup trucks. By comparison, Chevy lists the new Traverse with a maximum tow rating of 5,000 pounds.

To no surprise, the V8-powered Durango trims guzzle down fuel at a much faster rate. Drivers can expect the Durango R/T to deliver 14 mpg town/22 mpg freeway. On the other hand, fuel economy estimates for the more powerful Durango SRT 392 stand at 13 mpg town/19 mpg freeway. Folks who choose the supercharged Durango SRT Hellcat can anticipate getting only 12 mpg town/17 mpg freeway. Premium fuel is also recommended for the Durango’s available Hemi V8 engines.

Both of these SUVs have an effective anti-lock braking system. When braking from 60 mph, it takes the Durango around 125 feet to come to a complete halt. Upgraded Brembo performance brakes enabled the Durango SRT to record an even more impressive 60-0 mph stopping distance of 110 feet. On the other hand, tests show the Chevrolet Traverse takes around 118 feet to come to a stop.

These vehicles come with a similar warranty package. Buyers will receive a 60,000-mile powertrain warranty that covers the engine and transmission. The original bumper-to-bumper warranty lasts for 36,000 miles.

Comfort is a top concern for the 2021 Chevrolet Traverse. Automotive reviewers give the Traverse a strong score for its well-cushioned ride. When taking an extended road trip, passengers won’t mind spending time inside the new Traverse. Car shoppers can also expect the 2021 Dodge Durango to offer a soft and comfy ride. Drivers can adjust the ride stiffness of the racy Durango SRT models.

Durango interior noise levels are relatively low. Dodge added a good amount of sound-dampening materials. However, the SUV’s available performance tires do create a bit more road noise. The Traverse was named one of the quietest SUVs in the class. Even the base Traverse benefits from standard active noise cancellation technology. When traveling at a speed of 70 mph, there’s barely a hint of wind noise heard inside the cabin.

Some Durango owners have complained about this SUV’s outward visibility. When changing from one lane to the next, drivers often encounter rear blind spots. On the bright side, forward visibility is good. Outward viability behind the wheel of the Traverse is similar. Rear corner visibility can be a bit limited.

Both of these three-row models are great for big families. While the Durango can accommodate up to seven people, the Traverse can handle up to eight occupants. However, there’s even more space to spread out inside the Traverse. It has a total passenger volume of 157.3 cubic feet, which outclasses the Durango’s total passenger volume of 141.4 cubic feet. Keep in mind that there’s not a significant different in rear legroom between these family haulers.

When it comes to overall seat comfort, the Durango and the Traverse are evenly matched. However, some larger people may find the Traverse’s front seats to be not quite wide enough. Heated/ventilated front seats are optional on both vehicles. Upgraded leather upholstery is available as well.

The Dodge Durango offers one of the best infotainment systems in the business. An 8.4-inch Uconnect 4 touchscreen with smartphone connectivity comes standard. Many drivers love this interface’s overall simplicity. However, buyers can upgrade to an all-new Uconnect 5 system. It features a much larger 10.1-inch display with quicker processing software. A built-in Performance Pages app is also available, which allows drivers to obtain real-time performance data and adjust the SUV’s driving character.

The 2021 Chevrolet Traverse is among the safest three-row SUVs in America. This SUV snagged a five-star overall safety rating from the NHTSA. While the Traverse also received good crash scores from the IIHS, its standard headlights were given a “Poor” rating.

While the 2021 Dodge Durango provides an adequate amount of impact protection, an NHTSA four-star overall safety rating puts it a step behind the Traverse. Despite the Durango’s superior side-impact protection, its frontal crash scores were not as impressive. This SUV also have a mediocre, three-star rollover rating.

As expected, these SUVs come standard with a backup camera. However, there are some other helpful driving aids available. The Durango offers an optional safety package that includes forward collision mitigation, active lane control, and smart cruise control. Blind-spot monitoring with rear cross-traffic warning is also offered.

Most of the Durango’s safety technologies are available on the Traverse. However, only the Traverse offers a 360-degree camera system. This feature will prove to be value when driving in a congested parking area. Chevy also offers a rear camera mirror that helps to reduce rear blind spots.

Prices for the 2021 Chevrolet Traverse start at an estimated $29,800. Meanwhile, the 2021 Dodge Durango carries an MSRP of $32,245. Car shoppers can save some extra money by choosing the Traverse. Common features include a touchscreen display with Apple CarPlay Android Auto smartphone integration, Bluetooth, and tri-zone automatic climate control. A Wi-Fi hotspot is also found on the Traverse.

Luxury car shoppers will be looking at the range-topping Traverse High Country. Chevy has given this upscale trim a starting price of nearly $51,000. It compares to the Durango Citadel, which has a starting MSRP of $47,800. Drivers who wish to save some cash can drop down to the Traverse Premier. Not only does the Traverse Premier feel just as luxurious as the Durango Citadel, but it is also $3,000 less expensive.

Both of these three-row SUVs are hot commodities. However, some folks may find one to be more appealing than the other.

The 2021 Chevrolet Traverse is a good performer. Its strong V6 engine and composed V6 engine will impress most people. However, muscle car fans will be more drawn to the Durango. SRT versions of the Durango offer blistering acceleration. On the downside, drivers must give up a lot of fuel economy.

Enhanced towing capabilities give the Durango another edge over the Traverse. While both SUVs offer an AWD system, an available two-speed transfer case makes the Durango more suitable for off-road excursions. It will perform better on muddy trails.

Most families will find the Durango to be spacious and accommodating. However, there’s more passenger and luggage space inside the new Traverse. Families will also appreciate the Traverse’s better crash scores and additional safety options.

The Durango’s muscular exterior styling is a big attraction for many people. Exterior upgrades, such as a functional hood scoop and large exhaust tips, help give the SRT models to look ferocious. While the Traverse doesn’t look as brawny, it does have a stylish appearance. Blacked-out treatments transform the Traverse RS into a sportier SUV.

Before choosing between these SUVs, car shoppers should consider what they desire the most in a new family hauler. Drivers who desire an extremely spacious vehicle with all the latest safety tech should go with the Traverse. On the other hand, folks seeking maximum performance will want the Durango. Nonetheless, both vehicles are deserving of a test drive.

Save Money on a 2021 Chevrolet Traverse:
Are you Shopping for a New Vehicle? Find the Best Deals with "Free - No Hassle" Prices Quotes.