2021 Chevrolet Trax Pros vs Cons. Should You Buy? 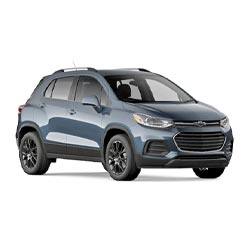 Should You Buy a 2021 Chevrolet Trax? Here Are Some Reasons For and Against

The Trax has been a popular smaller SUV in the Chevrolet lineup since premiering in 2015. Unfortunately, it has only undergone small refreshes rather than a full redesign since then. Also working against the Trax is the fact Chevrolet is bringing back the similarly sized Trailblazer in 2021. It is more rugged, full of features, slightly roomier, and may prove to be stiff competition for the Trax. Still, this subcompact SUV does offer a decent amount of space and capability in a small package. But does the 2021 Chevrolet Trax have what it needs to stay relevant?

There are only two trim levels for the 2021 Trax. The previously top-of-the-line Premier model has been discontinued. There is also a new Midnight Edition available on the LT trim level. A power sunroof is no longer an option. Paint options are also mixed up for 2021, with five colors being deleted and four colors being added. No longer will drivers be able to choose Satin Steel Metallic, Red Hot, Blue Metallic, Nightfall Gray Metallic, or Cajun Red. The new options for 2021 are Crimson Metallic, Shadow Graw Metallic, Midnight Blue Metallic, and Iridescent Pearl.

Both trim levels of the 2021 Trax take advantage of a turbocharged four-cylinder engine that makes 138-horsepower as well as 148 lb-ft of torque. While these numbers will not win you any races, this is enough power to satisfy most drivers due to the small size of the Trax. A six-speed automatic transmission is standard, along with front-wheel drive. All-wheel drive is also available. The Trax moves along nicely, particularly in the city.

Choosing either the LS or the LT version of the 2021 Trax will give you both Android Auto and Apple CarPlay. These features are part of the popular Chevrolet Infotainment 3 System. Both trims also utilize a 7-inch touchscreen. The graphics are clear and it is easy to navigate between the menus, unlike some rivals.

Another way that the 2021 Trax proves itself to be technologically advanced is with its standard Wifi hotspot capability. It is capable of connecting up to seven devices at a time. Chevrolet teams up with OnStar to provide this service. Be aware that a subscription at an additional cost is required to take advantage of this feature.

Fuel economy is an area that most SUVs are trying to improve in. The Trax manages to stay competitive in 2021. Models with front-wheel drive are able to get 26mpg in the city and 31mpg on the highway. Going with the available all-wheel drive will mean getting 24mpg city and 29mpg highway. These numbers make the Trax a good choice as a daily commuter.

The Trax does not offer the most cargo space in its class but it somewhat makes up for it with its practical touches. The backseat and front passenger seat can be folded entirely flat, allowing you to haul things up to eight feet in length. There is also a split-folding 60/40 backseat standard so that different combinations of people and cargo can be brought along.

The Trax has a good amount of space in both rows. Adults should be equally comfortable riding in the back as they would be in the front. A variety of seating upgrades are available as well, including leather upholstery, heated front seats, and power-adjustment for the driver.

Going with the top LT trim will give drivers the option of adding the all-new Midnight Edition Package. Not surprisingly, this adds quite a bit of black details to the exterior of the Trax. You get 18-inch gloss black aluminum wheels, all-season Blackwell tires, black door handles, and black bowtie emblems. It also gives the Trax black front and rear skid plates. This sleeker version of the Trax has a more sophisticated feel to it.

Also available is the Redline Edition. In many ways, this package is similar to the Midnight Edition. It separates itself by adding red accent stripes to the 18-inch black wheels as well as a red outline for the badges. Also included in the Redline package are black mirror caps, body-colored door handles, and a black grille with a black surround. The end result is a much more striking version of the 2021 Trax.

Although there is no longer a Premier trim, drivers can still choose to add some luxury to the Trax with the LT Convenience Package. It includes handy features such as keyless open and start. Also found in this package are nice touches like a leather-wrapped steering wheel and the available six-way power-adjustment for the driver's seat. This package costs less than $500 and offers several significant upgrades.

The 2021 Trax is a great choice for anyone who finds themselves squeezing into tight parking spots. Its small size makes it easy to maneuver in a variety of situations. The Trax is also able to turn quickly and with little effort on your part. The height of the driver's seat helps add to the great outward visibility as well, making it easy to get your Trax where you want it to go.

Reasons Not to Buy a 2021 Chevrolet Trax – The Cons

It is pretty surprising in this day and age to find a new SUV with no real driver aids to speak of. The 2021 Trax does come with the obligatory rearview camera. In order to get anything else, however, drivers will need to go with the LT and add the Driver Confidence Package. This only adds blind-spot monitoring, rear parking sensors, and rear cross-traffic alert, however. Common driver aids, such as forward collision warning and automatic high beams, are nowhere to be found. Many rivals come standard with more than the Trax has optional.

Considering it is a subcompact SUV, it may seem picky to call out the Trax on its lack of cargo space. Despite the practicality of the seat design, the maximum cargo capacity tops out at just over 48 cubic feet. In comparison, the Honda HR-V has a maximum capacity of almost 59 cubic feet, proving that a smaller SUV can indeed offer more space than the Trax does.

3. Bumpy Ride on the Highway

The 2021 Trax provides you with adequate acceleration and good fuel economy. What it fails to provide you with is a smooth ride. Highway speeds cause the Trax to feel quite bumpy. The ride quality is also hard to stomach on broken or rough pavement. This should definitely be a top priority for Chevrolet when they redesign the Trax.

Typically, a vehicle with so few safety and luxury features makes up for it by being incredibly affordable. The 2021 Trax, however, has a starting price that is actually slightly above average for the class. Buyers will find they might be able to get a lot more for their money if they look elsewhere.


How it Stacks Up to the Competition

The Ford EcoSport is similar in size to the Trax. Rather than a four-cylinder like the Trax, the EcoSport uses a three-cylinder instead. As a result, the Trax produces 15 more horsepower. Surprisingly, both have combined fuel economy ratings of 28mpg. The starting price for the EcoSport is lower, however, which may attract buyers looking for a no-frills subcompact SUV.

The Kia Seltos proves itself to be a strong competitor in this class. It manages to provide drivers with more fuel efficiency and more horsepower. The Seltos does have a higher price tag, but not by much. On the other hand, the Seltos goes with a continuously variable transmission. As efficient as these are, some people are not fans of how they drive. The Trax sticks with a more traditional six-speed automatic.

Several upgrades will need to be made to the Trax if Chevrolet intends to keep it in its lineup moving forward. This SUV desperately needs to offer some standard as well as more available driver aids if it wants to appeal to families. The design, both inside and outside, could use an update to make it look more modern as well. In fact, a complete redesign may be what it takes to save the Trax. In the meantime, the 2021 model may appeal to drivers who are wanting a no-nonsense way to get from point A to point B.