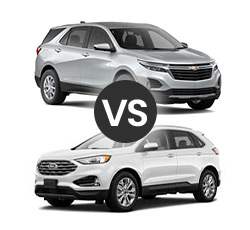 The 2022 Ford Edge and the 2022 Chevrolet Equinox remain among the country’s most appealing crossover SUVs. Both of these models have the main qualities that drivers seek in a family vehicle. They’re comfortable, safe, and offer enough high-tech goodies to please most people. While styling is subjective, the overwhelming majority of people will find these vehicles to be rather eye-catching.

The base Edge SE returns for the 2022 model year with a newly optional Black Appearance package. It boosts the SUV’s curb appeal by adding several blacked-out styling treatments. A new Adventure package is offered on the Edge’s SEL trim, which adds exclusive wheels with all-terrain tires and other unique touches.

A couple of big changes were also made to the Equinox's lineup. Chevy decided to update the SUV’s exterior styling by adding a more prominent grille and new headlights. New bumpers also add to the SUV’s attractiveness. Drivers who desire a sportier look will be interested in the new RS trim, which receives exclusive interior and exterior details. Meanwhile, the Equinox’s range-topping Premier trim’s cabin now looks more special.

When searching for a new family vehicle, some people may have both of these SUVs on their radar. In this head-to-head comparison, car shoppers will find out whether the Edge or the Equinox is the better choice.

The Equinox’s performance is best described as sufficient. While this crossover’s 0-60 mph time of 8.9 seconds is not considered to be quick, good low-end torque promotes a peppy performance around town. While true driving enthusiasts will yearn for more power, most soccer moms and dads will be perfectly pleased with the Equinox’s amount of get-up-and-go. Last year’s discontinued 2.0-liter, turbo four-cylinder engine enables the Equinox to record a 0-60 mph time of 6.8 seconds.

Upon taking the 2022 Ford Edge for a test drive, car shoppers will notice a clear difference in performance. This crossover’s turbo four-cylinder engine produces a more formidable 250 hp and 280 lb-ft of torque. An eight-speed automatic transmission links to the engine. With a tested 0-60 mph time of roughly 7.5 seconds, the Edge is noticeably quicker off the line. Drivers can also take advantage of the extra muscle when merging onto a fast-paced interstate highway.

Folks who desire the strongest acceleration will want the more performance-focused Edge ST. It’s put into motion by a turbo V6 engine, which manages to squeeze out 335 hp and 380 lb-ft of torque. A rapid-shifting, seven-speed automatic transmission seeks to enhance the ST trim’s responsiveness. During 0-60 mph testing, this more exciting trim recorded a time of 5.8 seconds.

The Equinox is not geared toward drivers who need a capable towing machine. According to Chevy, the Equinox can handle up to 1,500 pounds. While this vehicle won’t be able to transport the typical fishing boat, drivers will be able to pull most ATVs and water scooters.

A higher tow rating gives the Ford Edge an advantage over the Equinox. While most trims have a 1,500-pound max tow rating, the more potent Edge ST can tow up to 3,500 pounds. This is a plus for drivers who have a pop-up camper or a small fishing boat. Trailer sway control also enhances stability when pulling cargo.

Although the Equinox may lose to the Edge in the performance category, it will save drivers more money at the pump. Drivers can anticipate getting up to 26 mpg in urban areas and 31 mpg on the open road. Efficiency is only slightly lower on trims equipped with all-wheel drive. Furthermore, regular gasoline is the Equinox’s required fuel.

When equipped with its base engine, the Edge has a government-estimated fuel economy rating of 21 mpg town/28 mpg freeway. While the Edge ST may be more fun to drive, it has a lower gas mileage rating of 19 mpg town/25 mpg freeway. Both of the SUV’s available powertrains are engineered to use regular gasoline.

While the Chevrolet Equinox offers all-wheel drive, every trim in the Ford Edge's range come standard with an AWD system. In terms of being able to handle snowy road conditions, these SUVs are quite similar. Neither vehicle is built to tackle daunting off-road trails. However, all-terrain tires do come with the Edge’s newly available Adventure package. Drivers will have a tad more traction when traveling down a muddy path.

When encountering road hazards, drivers will appreciate the Equinox’s responsive braking system. This confidence-inspiring SUV posted a 60-0 mph stopping distance of 121 feet, which is quite good for the class. While the standard Edge takes around 129 feet to come to a stop, Ford’s available ST Performance Brake package ensures faster stopping. Aside from adding high-performance brakes with enhanced cooling properties, this package also equips the Edge with stickier summer tires.

Both the Equinox and the Edge have an average overall reliability rating. However, research shows that the Equinox’s yearly repair costs tend to be lower. Keep in mind that these crossovers are covered by a similar warranty. Like the Edge the Equinox gives buyers a 60,000-mile powertrain warranty. Owners will also receive a 36,000-mile bumper-to-bumper warranty.

The 2022 Ford Edge drives well. Automotive reviewers praise this crossover for its stable character. A responsive steering system also helps make the Edge easy to maneuver. Of course, driving enthusiasts will be happier behind the wheel of the Edge ST. A sports-tuned suspension elevates this model’s handling capabilities.

Drivers can also expect the 2022 Chevrolet Equinox to offer poised handling. Despite not offering a sport suspension, this crossover still manages to inspire confidence on twisty roads. However, a larger turning circle puts the Equinox at a disadvantage when navigating in tight parking areas.

Passengers will find that the Ford Edge offers a fairly good ride. However, expect the Edge to be a bit bouncy on rough pavement. To no surprise, the sports-tuned Edge ST feels stiffer than the other trims. Most automotive journalists agree that the Equinox’s ride quality is slightly better. Its suspension system effectively cancels out most ruts and bumps.

The Edge’s cabin receives top marks for its extremely quiet nature. Passengers are unlikely to hear any wind or road noise. Furthermore, this SUV’s engine operates without making a lot of commotion. Test drivers also describe the Equinox’s cabin as being exceptionally quiet. Few models in its class are as hushed on the inside.

In regard to outward visibility, the Edge receives an okay rating. However, its bulky front roof pillars can hamper forward visibility. A small rear window also creates blind spots when glancing in the Edge’s rearview mirror. Similar issues impact the Equinox’s visibility.

Both of these crossover SUVs are built to accommodate up to five passengers. However, the Equinox is larger. While the Edge has a total passenger volume of 113.9 cubic feet, there’s 103.5 cubic feet of passenger space inside the Equinox.

There’s roughly an additional 1.7 inches of legroom in the front of the Edge, which is a quality that will interest taller drivers. Some testers reveal that the Equinox’s steering wheel doesn’t telescope far enough, thus resulting in a less favorable driving position for some people.

Both SUV’s provide a good amount of rear legroom. One of the Edge’s biggest advantages is its wider design, which comes in handy when traveling with three passengers in the backseat. While the Equinox’s optional panoramic sunroof is nice, it substantially reduces the SUV’s headroom.

Many of the same creature comforts are available for these SUVs, including heated/ventilated front seats and heated rear seats. However, reviewers find the Edge’s climate control system to be more effective. According to some people, the Equinox’s vents are placed in a poor position.

Ford’s latest SYNC 4 infotainment system comes equipped on the Edge. It features a standard 12.0-inch touchscreen, which is easy to use and displays sharp graphics. While the Equinox’s standard 7.0-inch screen is noticeably smaller, it goes a step further by providing wireless smartphone integration. The only problem with the Equinox’s infotainment unit is that it can experience glare.

The 2022 Ford Edge recorded some of the finest crash scores in its class. While the Edge receives a four-star rollover rating, it earned a perfect rating in every impact test. In terms of overall crash protection, the 2022 Chevrolet Equinox is equal to the Edge. Both of these SUVs provide great security for families.

While the Equinox comes standard with forward emergency braking and lane-keeping technology, the Edge goes the extra mile by providing blind-spot warning as a standard feature. On the other hand, only the Equinox provides a rear-seat reminder system. Distracted parents who have young children and pets will value the extra security.

Ford’s My Key system is found on the Edge, which allows owners to set a speed limit for teens and valet drivers. It’s not as advanced as the Equinox’s Teen Driver system. With Chevy’s Teen Driver system, parents can closely track their youngster’s driving habits. They can access an in-vehicle report card, which highlights driving errors.

While both vehicles offer adaptive cruise control, evasive steering assist is exclusively available on the Edge. This feature helps drivers to steer clear of oncoming obstacles. Although the Equinox offers a 360-degree camera system, an automated parking system and a front-view camera are on on the Edge's list of options.

Chevy lists the new Equinox with a starting price of around $25,800. By comparison, prices for the Ford Edge begin at an estimated $37,150. Car shoppers who choose the Equinox obviously stand to save a lot of extra money. Even when equipped with an optional AWD system, the Equinox still undercuts the Edge by thousands of dollars. There's not a major difference in standard equipment between their entry-level trims.

Neither SUV is a bad pick. When it comes to comfort, these crossovers are an extremely close match. They both also have an excellent safety profile. Furthermore, owners can enjoy a confident drive when the weather turns bad.

Drivers who desire the best performance may want the 2022 Ford Edge. It feels more responsive during everyday driving. All-wheel drive is a standard convenience. No version of the Equinox comes close to rivaling the fun of the high-output Edge ST.

While the 2022 Chevrolet Equinox may no longer offer an engine upgrade, commuters will appreciate its noticeably higher fuel economy rating. At the end of the day, car shoppers who desire the most bang for their buck will favor the Equinox. Its range-topping Premier trim is especially upscale.