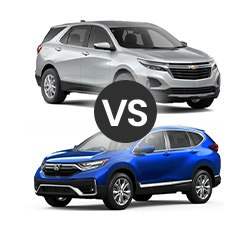 There seem to be a growing number of two-row SUVs available. The Honda CR-V and Chevrolet Equinox have both been around for quite some time, so they've definitely proven themselves in a competitive market. Their staying power is likely due to a number of factors, including their affordable pricing structure and their size and capability. There are many reasons why the CR-V and Equinox are rivals in the market, and this overview will highlight what makes each SUV distinct from the other.

Chevrolet has equipped the Equinox with a 1.5-liter turbocharged engine. This engine has four cylinders and can make 170 horsepower and 203 pound-feet of torque. This is a decent amount of power, though it won't excite anybody by any means. The engine is paired with a six-speed electronically controlled automatic transmission. Whenever a driver wants to take more control over driving, he/she can use the Driver Shift Control function to change gears.

All-wheel drive is available on this Chevy SUV. It's a system that constantly monitors how each wheel is doing. If things are fine, then the power would be sent to the front wheels to enhance fuel efficiency. If conditions aren't great and the wheels are having trouble gripping the roads, then the system would redirect some power to the rear axle so the the Equinox can remain in control.

Another system that's always ready to take action is called StabiliTrak. As its name suggests, it can make adjustments to braking and engine torque in order to improve stability and traction. It can be useful when someone unexpectedly has to brake or change directions, and it can kick into action when accelerating or cornering on slippery roads.

This model can be used to haul cargo, but the trailer needs to be fairly small in order for the situation to be safe. The Equinox has a maximum towing capacity of 1,500 pounds. It uses a MacPherson front strut and a four-link suspension in the rear, so it does handle fairly well.

There's more to consider with the CR-V. That's because it can be set up with a traditional powertrain a hybrid system. The regular engine is similar to the one found in the Traverse, as it's also a 1.5-liter turbocharged model. This engine can make 190 horsepower and 179 pound-feet of torque. It's available with front-wheel or all-wheel drive, and it works together with a continuously variable transmission. The transmission's Sport mode can be engaged if the driver wants to make things a little more exciting.

If someone would like a way to conserve fuel, one idea would be to get the hybrid version of the CR-V. It's able to earn up to 40 miles per gallon in the city and 35 miles per gallon on the highway.

The hybrid version of the CR-V uses a 2.0-liter engine and an electric system to make a total of 181 horsepower and 232 pound-feet of torque. Drivers can select from three modes, depending on the situation. Those modes are ECON, Sport, and EV, and Honda has paired this engine with an electronic continuously variable transmission.

Like the Equinox, the CR-V has a towing capacity of 1,500 pounds. Its front suspension components are the same as the ones found on the Equinox, and in the back of the CR-V, there's a multi-link double wishbone suspension.

Some extra mechanisms that benefit the CR-V are active noise cancellation and hill start assist. With hill start assist, the brakes can be held as the driver transitions from placing his/her foot on the gas pedal instead of the brake pedal.

Chevrolet's Equinox is a touch longer than the CR-V is. It measures 183.1 inches from nose to tail, whereas the CR-V is 182.1 inches long. However, the CR-V is slightly taller and wider.

In regards to leg room, both vehicles have much to offer. First-row passengers, as one would expect, have plenty of space. Those in the second row of the Equinox have up to 39.9 inches of leg room, and rear-seat passengers in the CR-V can enjoy having 40.4 inches of leg room. This is a big advantage that these vehicles have, and it's likely to be one reason why potential customers find these vehicles to be attractive.

Some of the other standard components that can enhance the overall driving experience of the Equinox are keyless access with push-button start, Wi-Fi capability, and wireless Apple CarPlay and Android Auto. SiriusXM Satellite Radio is standard as well. The standard touchscreen measures seven inches, but higher trims can have eight-inch touchscreens. Along with that touchscreen can come integrated navigation and seven Bose speakers. Otherwise, the vehicle would have six speakers. Four USB ports can be included with the Equinox, which is great of when multiple devices have to be charged.

With the CR-V, push-button start isn't standard, but it is found on almost all trims. Further, it can have a heated steering wheel and heated front seats. Like the Chevy, the Honda can have a memory system that works on the driver's seat and side mirrors. With the push of a button, these elements can slide into the driver's preferred position.

The Honda SUV starts out with four speakers, but most of its trims have six speakers. Its higher trims have either eight-or nine-speaker audio systems, with the latter being enhanced with a subwoofer. The base trim only has one USB port, and most have two USB ports in the front and could have two more in the back. Notably, wireless charging is standard on the most advanced trim.

Most trims of the Honda have seven-inch touchscreens. With this touchscreen comes Apple CarPlay, Android Auto, and Bluetooth. SiriusXM and HD Radio are included with three trims.

Unfortunately, the base trim of the Honda has a five-inch LCD screen instead of a touchscreen, nor does it have smartphone connectivity. These are elements that many modern customers are specifically looking for and expect to find in new models, so it may be hard for this vehicle to compete with others. That being said, all trims do have Pandora compatibility in case anyone wants to use this streaming service to find things to listen to.

Safety plays a big role when people are deciding which vehicles to get. Chevrolet has done an excellent job of setting up the Equinox with a variety of driver-assist technologies. Honda has done the same with the CR-V, and its safety package is called Honda Sensing.

Both SUVs can reduce the likelihood of getting involved in a frontal collision. They do so by warning drivers when they get too close to objects in front of them. If necessary, these vehicles can hit the brakes to hopefully avoid an accident.

Also, these models have lane departure warning and lane keeping assist. If a driver starts to drift to one side, an alert would be issued, and the vehicle could automatically correct the steering if necessary.

With the two vehicles, blind-spot monitoring and rear cross-traffic alert are standard on higher trims. The Equinox has surround vision and parking assist, too.

Both vehicles are pretty affordable. The base trim of the Honda CR-V costs $26,800, while the LS trim of the Chevrolet Equinox starts things off with a cost of $27,445. There definitely is a difference here in price, but remember than the CR-V doesn't have the same type of advanced technology that the Equinox has.

Mid-level trims for the two models hover around the $30,000 mark. Hybrid versions of the CR-V are going to be a few thousand dollars more expensive than their counterparts, so remember to factor that in if considering a hybrid powertrain. Of course, the long-term gas savings can offset the up-front additional cost. Over time, the cumulative savings could become significant.

At the top of the lineup of each vehicle, there's the Equinox Premier and CR-V Touring. The Premium costs $34,245, and the Touring has a starting price of $36,600. Both have leather upholstery, but the CR-V has heated and ventilated front seats and integrated navigation. Navigation is optional with the Premier, but not standard. On the other hand, the Premier has a 360-degree camera.

These vehicles are fairly evenly matched. They offer about the same amount of power, though it's very important to keep in mind that the CR-V can come with a hybrid system. In fact, that hybrid system delivers a solid amount of power in addition to being quite efficient.

The CR-V has more interior space, and that's likely to be a key component in the decision-making process for many buyers. However, the Equinox is cheaper, and of course, this fact can't be ignored.

Either vehicle would be a solid option. Higher trims of the Equinox and CR-V feel somewhat sophisticated, and lower trims seem pretty standard. To be realistic, practical vehicles are exactly what the majority of customers are looking for.