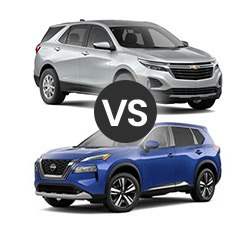 Small SUVs are everywhere buyers look lately. They fill the need of being versatile and relatively spacious without sacrificing fuel economy too badly. For Chevrolet, the compact Equinox has been one of their most popular SUVs. The same is true for the Rogue, which is the top-selling vehicle for Nissan.

Both the Equinox and the Rogue have only one engine option in 2022. For the Chevrolet SUV, buyers will get a turbocharged 1.5L four-cylinder that creates 170-horsepower and 203 lb-ft of torque. It is mated to a six-speed automatic transmission, and front-wheel drive is the standard. Every trim of the 2022 Equinox is also available with an all-wheel drive.

The Rogue also has a turbocharged 1.5L four-cylinder engine, but it is a bit zippier. This engine creates 201-horsepower and 225 lb-ft of torque, and it is mated to a continuously variable transmission. Like the Equinox, every model of the Rogue comes standard with front-wheel drive and can upgrade to all-wheel drive.

Neither of these vehicles is really designed for towing. When properly equipped, they both can handle up to 1,500. While this is not uncommon in the subcompact SUV segment of the market, there are some options that can do much more than that.

Another thing to consider is the projected reliability of each vehicle. J.D. Power rates new vehicles, and they gave the 2022 Equinox a score of 85 out of 100. This is slightly better than the Rogue, which got a score of 82. Both of these scores fall into the "Great" range.

Either the new Equinox or the new Rogue will make a good daily driver. Both have nicely weighted steering to give them a sporty feel, and the suspension in both vehicles does an admirable job of absorbing the bumps in the road. If buyers choose the Equinox, however, they should note that the RS trim has 19-inch wheels and low-profile tires, which gives it a firm ride.

Whether drivers regularly do bulk grocery shopping or just occasionally go for a weekend getaway, they should consider how much cargo space their new vehicle will have. The Equinox has just under 30 cubic feet when both rows are up, and just under 64 feet when the second row is folded down.

Many drivers consider high-tech features the biggest priority for their new vehicle. The Equinox comes standard with a 7-inch touchscreen, while the Rogue has an 8-inch one instead. On the other hand, the Equinox has wireless versions of Android Auto and Apple CarPlay, while the Rogue has wired versions. The Equinox comes standard with a Wi-Fi hotspot, but that is an optional feature for the Rogue.

As for the sound situation, the Rogue comes standard with four speakers while the Equinox has six. Both of these SUVs have satellite radio, and the Equinox adds HD radio to its standard feature list as well. A seven-speaker sound system is available on select Equinox models, while the Rogue can upgrade to systems with either six or ten speakers.

The Equinox has spacious and supportive seats for the front row. Unfortunately for this SUV, few vehicles boast seats as comfortable as the Rogue, which comes with Nissan's Zero Gravity seats. The backseats of both of these SUVs are relatively spacious. Either can easily handle two adults or three children.

Choosing the entry-level model of either of these SUVs will mean getting a relatively bare-bones cabin. Cloth upholstery is standard, and there is only manual adjustment for the driver's seat. Mid-level trims of both the Equinox and the Rogue add extras like dual-zone automatic climate control and a remote start. The Rogue can even upgrade to tri-zone automatic climate control, and it can also add a 12.3-inch digital instrument panel.

Most buyers will agree that the safety scores of any vehicle they are considering are important. The National Highway Traffic Safety Administration has tested both the 2022 Equinox and the 2022 Rogue. The Equinox received five out of five stars overall, while the Rogue got only four out of five.

It is worth taking a closer look at each of those ratings. The Equinox received five stars in both frontal and side collisions, while it received four stars in rollover testing. For the Rogue, five stars were given for side crashes but only four stars for frontal collisions and rollovers.

Buyers should also consider the number of standard assistance features that each of these SUVs offers. Found on both lists are things like forward automatic emergency braking, automatic high beams, and lane departure warning. The Equinox also has the Teen Driver program and a rear-seat alert. Buyers will likely find the Rogue more impressive because it comes with reverse automatic emergency braking, driver attention monitoring, blind-spot monitoring, and rear cross-traffic alert.

The 2022 Equinox has a safety alert seat on its available feature list. This is not something that can be had on the Rogue. The Chevrolet SUV is also available with a hands-free park assist. On the other hand, the Rogue offers navigation-linked Pro-Pilot Assist. This feature keeps the SUV centered in its lane while also maintaining a set speed.

The Rogue is more expensive at every level, but does it justify the extra cost? It is easy to make a case for the entry-level model, which has a larger touchscreen and more standard safety features. The Rogue also has a more powerful engine that manages to also be more efficient.

Buyers can also take into consideration how much these vehicles are estimated to cost over time. Typically, estimates are based on a five-year period where the vehicle is driven 15,000 miles a year. In this case, the focus will be on the entry-level versions with front-wheel drive.

The 2022 Equinox is estimated to lose $16,400 in value over five years. There are no figures available for the 2022 Rogue, but the buyers can look at the very similar 2021 model for a good comparison. Drivers can expect their new Rogue to lose around $17,000 over the course of five years.

Next, the fuel costs should be considered. The Equinox will cost around $8,570 in gas, while the Rogue will cost around $8,000. That is due to the efficiency of its continuously variable transmission. When looking at projected maintenance costs, the Equinox is estimated to be around $4,300, while the Rogue should cost only $3,400. Repair estimates for both SUVs are at around 1,800.

Overall, the pros far outweigh the cons for both of these SUVs. They are well-rounded and have no unforgivable flaws. As a result, buyers will have to choose what factors matter the most in order to make their decision.

First, consider the 2022 Chevrolet Equinox. It got higher safety scores and a higher predicted reliability estimate, which may appeal to families. This SUV also has the wireless versions of the smartphone integration tools that drivers are starting to rely on. The starting price for the Equinox is right around average as well, allowing it to fall into the budget of more buyers.

Second, take a look at the advantages associated with the 2022 Nissan Rogue. The engine produces more horsepower while still managing to be the more efficient of the two. It also has a truly impressive amount of cargo space and more standard driver aids. The Rogue also has the Zero Gravity seats, which are some of the most comfortable ones out there. These factors are also appealing to a family, plus anyone who drives a lot of miles daily.

Families will be well-served by either the 2022 Chevrolet Equinox or the 2022 Nissan Rogue. The Equinox is a safer bet for anyone who wants a great predicted reliability score and lower price tag, while the Rogue will work better for people who need a lot of cargo space or more passing power.