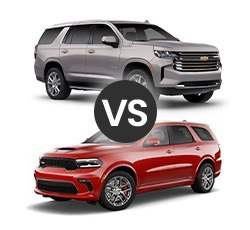 Families need enough space for everyone to be comfortable, plus have room for their gear. That is why there has been an explosion in the popularity of three-row SUVs. They typically have enough room for at least seven, plus a variety of convenience features.

The 2022 Chevrolet Tahoe is a large SUV that has been a family favorite for a while. As for the 2022 Dodge Durango, it is a midsize vehicle that only recently began coming standard with a third row. Both of these options are worth considering for growing families, but they are pretty different in a few ways. In this guide, these differences are highlighted to help buyers make an educated choice.

So, while the entry-level Tahoe is faster than the entry-level Durango, the top trim of the Dodge SUV is faster than any version of the Chevy SUV. All of the Tahoe engines pair with a 10-speed automatic transmission. For the Durango, Dodge goes with an eight-speed automatic across the board. Each of these SUVs has rear-wheel drive standard on most trim levels and all-wheel drive available.

The maximum towing capacity for the 2022 Tahoe is 8,400 pounds. To get that, drivers will need to choose a rear-wheel drive, the standard V8, and add the towing package. That number is average for large SUVs. The Dodge Durango with the 6.4L V8 or 5.7L V8 and towing package can bring along up to 8,700 pounds. That is excellent for a midsize SUV and even more than the larger Tahoe.

The Tahoe is a truck-based SUV, which is evident when trying to drive it around town. It does decently, but there will be a bit of noticeable body roll during turns. The steering is nicely weighted, however, and the ride quality is smooth. The Tahoe is available with an adaptive magnetic ride control suspension as well as an adaptive air suspension, either of which will make this SUV glide over the road.

As for the Durango, it feels more at home on the highway than it will in the city. It is a bit hard to maneuver around tight corners or into small parking spaces. This is due to its wide turning radius. The Durango's steering also feels a bit heavy, which makes it a chore to turn sharply. On the plus side, the suspension does an excellent job of handling the bumps in the road.

Moving onto the infotainment setups of these vehicles, the Tahoe has an 8-inch touchscreen standard. The one in the Durango is slightly larger, measuring at 8.4-inches. Both of these SUVs come with Apple CarPlay and Android Auto, but the Tahoe comes standard with the wireless versions. The Durango has only four USB ports standard, while the Tahoe has at least eight.

The number of seats may be the deciding factor in some cases. In its standard configuration, the Tahoe can seat eight. Exclusive to the entry-level trim is the option of having a first-row bench, which will actually expand the seating to nine. The Durango, on the other hand, can only seat up to seven. Both of these SUVs come with tri-zone automatic climate control to help keep everyone comfortable.

When it comes to legroom and headroom, the Tahoe is spacious in all three rows. At the same time, the seats are a bit lacking when it comes to cushion and support. The Durango has more comfortable seats, and adults will find the first and second rows to have enough room to stretch out. As for the third row, the Durango offers more space than many midsize SUVs, but it is more cramped than the one in the Tahoe.

When comparing test scores from the National Highway Traffic Safety Administration, these SUVs performed similarly. The 2022 Tahoe received an overall score of four out of five stars. It earned four stars for frontal collisions, five stars for side crash tests, and only three stars in rollover testing.

As far as advanced driver aids go, the Tahoe has more on its standard feature list. It includes forward-collision mitigation, automatic high beams, rain-sensing windshield wipers, and both front and rear parking sensors. The Tahoe also comes standard wtih Buckle to Drive, Chevy's program that prevents the SUV from shifting out of park until the driver has buckled their seat belt. Teen Driver, a program designed for parents to have some control when their teenager is at the wheel, is also included.

Rear parking sensors and a rearview camera are on the standard feature list for the Durango. Interestingly, this SUV also comes with blind-spot monitoring and rear cross-traffic alert, which is merely optional for the Tahoe. Automatic high beams, front parking sensors, and forward collision mitigation are all available for select Durango models.

Adaptive cruise control is optional for both the Tahoe and the Durango. The Chevy Tahoe also offers a head-up display, a surround-view camera system, and a rearview mirror camera. It can also be equipped with a safety alert seat that vibrates to grab the driver's attention.

The Tahoe is considerably more expensive than the Durango, but it is relatively inexpensive when compared to other large SUVs. It starts out at about $50,500, and top trim levels can easily top $70,000. As for the Durango, it can be brought home for as little as $35,500. The top model with the heart-pounding V8 starts at about $66,700. Although the Tahoe is pricier, it does offer more cargo space, a more powerful standard engine, and far more standard driver aids.

It is more useful to look at things like fuel efficiency and service costs. Buyers can expect to spend around $16,100 on gas if they choose the entry-level Tahoe over the course of five years. Fuel costs for the Durango with its V6 are estimated to be $13,000.

The repair estimates for both of these SUVs are right around $750 over the course of five years. Maintenance costs for the Tahoe are estimated to be about $4,000. Buyers will save a bit on Durango maintenance, which is estimated to cost around $3,500.

What if drivers are interested in the performance-oriented versions of these SUVs? Comparing the four-wheel-drive versions of the Tahoe RST and the Durango SRT can be useful. For the Tahoe, buyers can expect to pay around $18,825 in fuel. At the same time, they would pay a painful $21,000 on fuel if they choose the Durango SRT. These numbers are assuming that the SUVs are driven around 15,000 miles each year.

The 2022 Chevrolet Tahoe is an excellent SUV choice in most cases. It is pricey, but it has more cargo space than most of its competitors and the latest in tech and safety features. The initial price, however, as well as the sharp depreciation drop, may have thrifty buyers looking elsewhere.

Whether or not the 2022 Dodge Durango is a smart buy really depends on what the individual driver is looking for from their SUV. It is far more affordable, especially at the lower end of the trim ladder. The towing and power are impressive, and it is decently spacious for a midsize three-row SUV. On the other hand, the fuel economy and maneuvering issues may be too much for some people to get over.

Ultimately, the budget and priorities that drivers are working with will determine if the 2022 Chevrolet Tahoe or the 2022 Dodge Durango is the better choice. The Tahoe is an ideal family vehicle, while the Durango offers a respectable amount of practicality at a lower price.