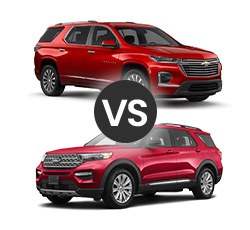 2022 Traverse vs Explorer - How Do They Stack Up? Which is Better?

Although compact SUVs are what currently dominate the market, these vehicles simply are not large enough for some drivers. That is where midsize three-row SUVs come into play. More sophisticated than a minivan, at least theoretically, they offer plenty of space for both passengers and cargo.

Ford and Chevrolet battle head-to-head in every segment of the market. When it comes to midsize SUVs with room for seven or more, buyers will be looking at the 2022 Traverse and the 2022 Explorer. Both of these vehicles are applauded for their interior space and standard feature list. There are far more differences than similarities, however, so buyers will want to consider them both carefully before choosing between the two.

In 2022, every new Chevrolet Traverse comes with a 3.6L V6 engine that creates 310-horsepower and 266 lb-ft of torque. A nine-speed automatic transmission is standard, along with front-wheel drive. Any Traverse model can be equipped with an all-wheel-drive as well. The powertrain provides satisfying acceleration around town and on the highway.

There are more options when taking a look at the 2022 Explorer. Standard for the SUV is a turbo 2.3L four-cylinder engine that pumps out 300-horsepower and 310 lb-ft of torque. It pairs with a 10-speed automatic transmission and rear-wheel drive, which some buyers may find they prefer. All-wheel drive is available. The base engine for the Explorer creates plenty of power to keep most drivers happy.

A turbocharged V6 is also available, allowing the Explorer to create 400-horsepower and 415 lb-ft of torque. This engine also pairs with a 10-speed automatic transmission, plus it gets a sport-tuned suspension. An available ST High-Performance package will further add red brake calipers and high-performance brakes. If buyers desire efficiency, they can go with the Limited Hybrid model. It has a V6-based hybrid powertrain with a combined output of 318-horsepower.

If off-roading is a priority to drivers, the Ford Explorer offers the Timberline trim level. It is not suitable for treks through the wilderness, but it does come standard with four-wheel drive. The Explorer Timberline also has skid plates and an off-road-oriented suspension. A torque-sensing limited-slip differential comes standard as well.

The warranties of the 2022 Traverse and the 2022 Explorer are identical. Buyers will receive limited comprehensive coverage for three years or 36,000 miles, and powertrain coverage for five years or 60,000 miles. When looking at the predicted reliability scores from J.D. Power, these two SUVs are neck and neck. The Traverse has a score of 82 out of 100, while the Explorer has a score of 81.

Buyers should be satisfied by the driving dynamics of either the 2022 Traverse or the 2022 Explorer. The Traverse does feel a bit large when trying to maneuver in the city, but its quick acceleration on the highway makes up for this flaw. As for the Explorer, it has excellent traction and responsive steering. This leads to an athletic feel at the wheel, particularly in the ST trim level.

The Chevrolet Traverse has seating for up to eight people in its standard configuration, with upper trim levels dropping down to seating for seven. The Explorer, on the other hand, has room for up to seven standard, and upper trims drop down to six. This is another factor that may ultimately help families decide which SUV to choose.

There is plenty of space in the Traverse to get comfortable, particularly in the first two rows. The Traverse has a slightly cramped third row, which is typical for the midsize SUV market. Adults would be far less comfortable in the back of the Explorer, however. It has cramped legroom in both back rows, and the low positioning of the third row makes it a pain to get in and out.

Next up is the infotainment system. The Traverse and the Explorer both have Android Auto, Apple CarPlay, satellite radio, and a Wi-Fi hotspot on their standard equipment lists. A 7-inch touchscreen comes standard for the Traverse, while the Explorer has an 8-inch one instead. On the other hand, the Explorer only comes with two USB ports on its base level, while the Traverse has a minimum of six.

These SUVs both come equipped with tri-zone automatic climate control. The Traverse has proximity keyless entry as a standard feature, while this is located on the options list for the Explorer. At the same time, the Explorer comes equipped with a power-adjustable driver's seat on all models, while that is missing from the entry-level Traverse.

If buyers are willing to pay more for feature packages, the Explorer can become quite luxurious. Examples include multicontour massaging front seats and genuine wood interior trim. Tri-diamond leather seats are available as well.

The 2022 Ford Explorer has been named a "Top Safety Pick+" by the Insurance Institute for Highway Safety. It received the best possible score in all of the main categories tested. Buyers should note that the Explorer got the second-best score for its headlights. Both the standard and optional crash prevention systems got were deemed "Superior."

As for the Traverse, it received the top score in five of the categories it was tested in. It received the second-best possible score when it came to side-crash testing. The IIHS has not yet tested the crash prevention system equipped on the Traverse.

The IIHS also evaluated these two SUVs on their LATCH systems, specifically how easy they are to use. Both got the second-highest score. Interestingly, they both received a "Poor" when it came to seat belt reminders.

Both the 2022 Traverse and the 2022 Explorer are equipped with pedestrian detection, forward automatic emergency braking, and lane-keeping assist. Automatic high beams are also standard. The Traverse comes equipped with a rear-seat reminder as well in an effort to prevent children or animals from being forgotten in the vehicle.

Ford gives the Explorer several extra standard driver aids. This SUV comes equipped with a driver attention monitor, blind-spot monitoring, and rear cross-traffic alert. It also has rear parking sensors. Both the Traverse and Explorer have a teen driver feature that is designed to let parents place limitations on the vehicle when they are not at the wheel.

Adaptive cruise control and a surround-view camera system are available for both these SUVs. The Explorer can also add front parking sensors, evasive steering assist, and road sign recognition. Chevrolet offers extras like a rearview mirror camera and a safety alert seat for the Traverse. The Chevrolet SUV can also have blind-spot monitoring and rear parking sensors on select models.

Many shoppers consider pricing to be one of the top factors in their decision. The entry-level models of the Traverse and the Explorer are very similar. A new Traverse LS starts at $33,000, while the base Explorer starts at $33,245. The Explorer gets pricier, however, with the top model starting at $53,610. Buyers are looking at around $51,200 if they choose the most luxurious Traverse.

The next thing to consider is how wallet-friendly these SUVs will be as the years go on. Compared to many rivals, the Traverse does well. The entry-level model is estimated to lose approximately $19,500 of value in five years. If the vehicle was driven around 15,000 miles per year, it will cost almost $11,000 in fuel. Maintenance estimates will come in at around $4,100, while repair costs will come in at around $2,000.

Although the Traverse is relatively impressive, the Explorer is a class leader when it comes to cost-to-own. It will lose approximately $17,100 over the course of five years, which is impressive compared to the Traverse. The entry-level model will cost around $9,700 in fuel. Maintenance costs are estimated to be around $2,300, which is considerably cheaper than the Traverse yet again. Repair estimates are similar, coming in at $1,850.

These numbers can be used to come up with an estimate of how much each vehicle will cost to drive per mile. The 2022 Traverse will cost around $0.59, while the Explorer will cost $0.52.

It is easy to see why the Chevrolet Traverse and the Ford Explorer have continued to be so popular with families over the years. The 2022 models represent well-rounded options with plenty of safety, technology, and convenience features. Considering the similar price structure, buyers will have to make their decision based on other factors.

The 2022 Chevrolet Traverse has a massive amount of cargo space. It also has a roomier second row, which will come in handy for families with older children. This SUV can also seat up to eight people, which is one more than will fit inside of the Ford Explorer. The six standard USB ports can cut down on arguments as well.

Meanwhile, the 2022 Ford Explorer gives buyers three powertrain options. Both the standard four-cylinder and the optional hybrid will save drivers money at the pumps. This SUV also holds onto its value much better, making it a smarter investment. Additionally, the Explorer has more standard driver aids than the Traverse. If a family takes frequent road trips, the available entertainment features in the Explorer may be worthwhile.

If space is the main priority, the 2022 Chevrolet Traverse is the way to go. Buyers who are after superior fuel efficiency will want to take the 2022 Ford Explorer for a test drive soon.